Who Is Regional, and Who Is American? 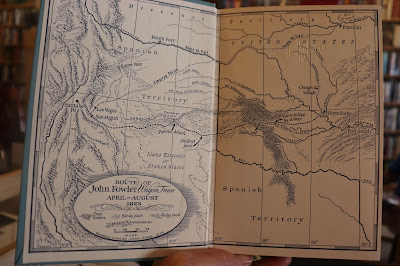 She swung her horse about and cantered him to where Johnny waited. When she came up, he grinned at her. “What do you think?”

“I think,” she said, “you would either die miserably in this place or learn to love it very much.”

His face sobered and he searched her eyes. Then he smiled. “You won’t die.”

The lines above come near the end of Voyage to Santa Fe, by Janice Holt Giles, published in 1962. How have I missed this wonderful American novelist for so long, only now stumbling on her (serendipity again!) and looking forward eagerly to reading much more of her work? The headstone on her grave reads “Kentucky Writer,” although three of her novels have the great American West as their setting, and others are set in her native Arkansas.

It’s odd, I think, that her Western novels did not break Giles out of the “regional” category. They did it for Jim Harrison. As long as his stories had Michigan for their setting, his work was considered regional, but when Jim and his novels moved out to Montana he became “American.” Is Montana more American than Michigan? The West more American than the Midwest? But even if the West is so all-American, so much more American than the Midwest (which I deny accept momentarily for the sake of argument), why did Voyage to Santa Fe, the story of an epic wagon train traveling from Three Forks in the Arkansas Territory to Santa Fe, a city in Mexico only just freed from Spanish dominion, not establish an already popular novelist as an American writer?

(Is it more difficult for a woman than a man to break out of the regional category? Knowing male writers who have chafed being geographically segregated, I’m not sure. The question was raised by one of my bookstore customers, who cited the case of Willa Cather, but we agreed that in recent decades that writer’s work has become much more highly regarded and widely known.)

New York, Boston, Baltimore … Los Angeles, San Francisco, Seattle … New Orleans, Savannah — among American cities, these have their shining places in national literature, while the Midwest and Great Plains seem, with the exception of Chicago, to present themselves to literary criticism as one large, blank expanse, with here and there a small regional twinkle. Ah, yes, Detroit! St. Louis! Kansas City! But the small towns, the woods and farms and lakes and prairies? Where are they? Are they not as much America as places fronting Atlantic, Pacific, or Gulf of Mexico?

Nor is the question of literary regionalism limited to fiction. Essayists — whether working in large themes or small; with nature, human nature, or the inevitable combination  of the two — are also hampered not by a glass ceiling but by glass walls that keep them within their own geographical regions. Eastern, Western, and Southern writers seem to break through. No one would think Wendell Berry’s work applicable only to Kentucky or that of Edward Abbey only to Utah. Kathleen Norris has brought Dakota to national awareness, and Terry Tempest Williams has done the same for the Great Salt Lake. But of all the Great Lakes writers, fiction and nonfiction, writing here today in America’s heartland, how many names are recognized on the East and West coasts?

It is baffling (and frustrating) to me. Does not the best writing take us out of ourselves and usher us into a different world, and to do this must it not provide all manner of sensual detail — sights, sounds, tastes, smells, and textures? In other words, is not the specific place where a story is set as important as the characters living there? After all, we are shaped as much by the places we inhabit as by our times.