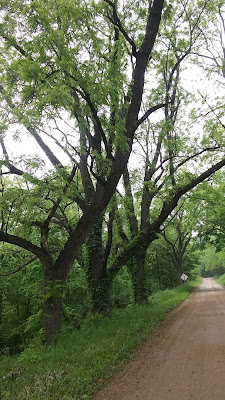 [Re 'tree-hugger' - Since the term is so often used as an epithet, I've decided to embrace it as part of my identity.]

You’d think I’d have had enough road travel to last a while, having settled back home less than a month ago after another Odyssean cross-country adventure stretched out over nine grueling days. But that was just the trouble: by the time we got to southern Michigan we were feeling the bite of the calendar urging us homeward, with the result that I had nowhere near enough time there with my son and none at all with a couple of my oldest friends.

One of the best things about June, though, is the length of the days, long enough that even someone who on the job until 5 p.m. can set out after work and have hours of daylight driving time. So that’s what I did last Saturday — and had a beautiful, sunny trip over the rivers, through the woods, and across the counties of Michigan from Leelanau to Kalamazoo. 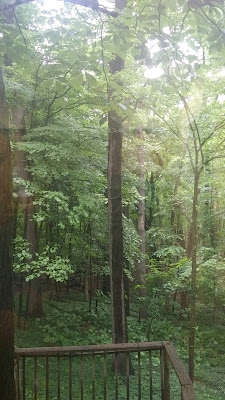 Dark was falling by the time I arrived at the home of the friends who had offered to put me up, and by morning the rain had arrived. My friends’ home is surrounded by woods. The sky was overcast. All day long, therefore, morning, afternoon, and evening, the light was the same, a murky, underwater green, overabundant foliage pressing in like tangles of seaweed or like a jungle intent on devouring everything human. Mayapples were happy, though, and azaleas and peonies in riotous bloom. And it was ideal weather for sleeping late and catching a nap later on still.

When I was fully conscious at last, my son took me out to breakfast downtown at the very hip and trendy Food Dance. It’s a Kalamazoo institution, I’m told, though I’ve been gone so long that it was new to me. After our leisurely breakfast, we left town behind to venture up into Barry County, aiming first for our old farmhouse to see how tall the pine trees had grown. We continued north after that stop and proceeded to lose ourselves for at least half an hour — and maybe a full hour, because we lost track of time, too — on Barry County back roads. We wandered slowly and wonderingly through old forest, past secret, hidden-away lakes and ponds and wetlands, all of it undeveloped land, much of it open to public hunting. At one point a great blue heron swooped low across the road in front of us, followed minutes later by a flash of oriole. The forest was tall and far-reaching, without cabins or paths other than the roads that would around and around and uphill and down dale. It was a magical world, and we were under its spell. 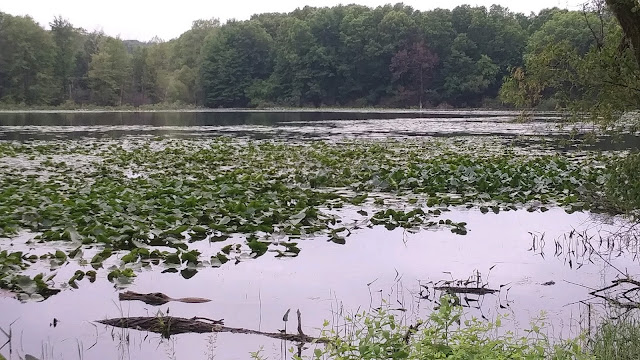 Before starting back on Monday I visited other friends, and their old country home too was wild with vegetation. Trees I remembered as new plantings had shot up like green and blue-green skyscrapers, the view of the lake across the road had almost vanished behind a thick screen of maple branches, and in the gardens out past the dining room windows, shouts of color brought hummingbirds.

After all my forest visitation, I could not face the high-speed expressway maze through Grand Rapids and chose instead to come back north closer to the Lake Michigan shoreline, from Kalamazoo to Allegan to Holland and north past Grand Haven and Pentwater. Old, familiar paths and names. Beautiful, overflowing rivers. A pair of young steers running and frisking in their pasture. Two horses standing with their rumps to the road, tails swishing flies away. A turtle crossing the pavement between one pond and another. These were paved roads, but they were roads less traveled nonetheless.

I thought a little bit about the perennial question of where Downstate leaves off and Up North begins. Which is Holland? Which is Muskegon? What about North Muskegon? But quickly my thoughts turned to more general musings, i.e., what a wonderful state Michigan is from north to south and west to east. Prairies, farm fields, pastures, orchards — forests, shorelines, and dunes — lakes, ponds, and wetlands — a lifetime of exploring will never be enough to experience it all.

Two book recommendations for today, reflecting my recent travel and reflections on the state of Michigan, come to you from your bookseller here in “Treeland” Up North. They are:

The Overstory, a novel by Richard Powers with characters whose lives are affected in one way or another by the great trees and forests of the United States;

The Marsh King’s Daughter, by Karen Dionne, a novel set in our own beloved, wooded and wild Upper Peninsula. 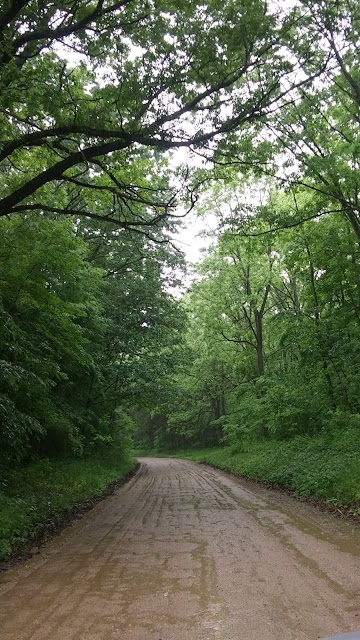