A Scent of the Past


My theme is memory, that winged host that soared about me one gray morning of war-time.

A summer visitor who usually comes up from Texas later in the season was enchanted by the woodland wildflowers in May and asked me what would be blooming there in June. Not much, I told her. The spring ephemerals are pretty much finished by June, and the canopy filling in with leaves, shading the ground. But field and roadside and garden flowers come on strong and are so many and so varied that it’s hard to keep track of them.

Some are, however, easy to overlook. The plant in the three images at the top of this post is an instance of the easily overlooked June wildflowers – or weeds, if you prefer. A scruffy little fellow that sprouts in the dust of driveways and dirt roads, pineapple weed, Matricaria discoidea, is identified by Stan Tekeila in Wildflowers of Michigan: Field Guide as “inconspicuous.” But when I pull over to the side of the road and my tires crush its greenish-yellow tops, releasing their scent, I am once again, if only for a moment, seven years old. 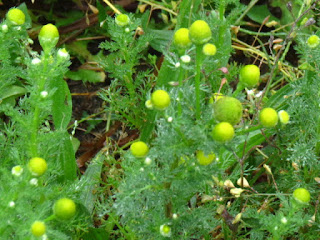 There were pineapple weeds in my grandmother’s dusty driveway in central Ohio. Must they not still be there? And shouldn’t my grandmother still be there, too, feeding her chickens and shelling peas, with little me beside her, eager to help? Will my grandfather be working out in his garden or his large raspberry patch? If a storm is coming, will my grandparents call me down from the swaying fruit trees in the backyard to join them in the safety of the house?

In Brideshead Revisited, the narrator recounts, from the perspective of World War II, scenes of his adolescence at the end of the Great War, the one not called “First” until the Second arrived. The book opens with his coming unexpectedly upon scenes from his youth:

“I have been here before,” I said; I had been there before; first with Sebastian more than twenty years ago on a cloudless day in June, when the ditches were creamy with meadowsweet and the air heavy with all the scents of summer; and though I had been there so often, in so many moods, it was to that first visit that my heart returned on this, my latest.

How strange it is to come upon – often out of context -- an old familiar aroma strongly associated in memory with a particular place and time and people. Here it is again, the same as always, that old sense perception, but now absent its old surroundings. Or one comes upon it in the old surroundings, as did Charles, but the familiar place has been transformed and is empty now of all those one remembers in it.

How can it be? we ask ourselves. How can those vivid scenes have vanished? They feel so very near at hand that one more than remembers: memory repeoples, reanimates, and reincarnates the past.

The river in Waugh's novel was the Bride, and June is the traditional month of brides. The many white flowers of garden and field seem to honor wedding couples, don't you think?

And back I fly in memory to Rhinelander . . . . Pineapple weed grows up in the hard-packed, sandy gravel at the side of the road and in the parking lot at Amanda's father's boat rental and tackle shop. We nibble on the buds like young rabbits. They do not taste like pineapple at all, but they taste good. We make bouquets of clover. We learn about bees. We pull a petal from the clover and chew on the base, looking for honey. There is no honey, but there is sweetness. Daisies fill the meadow where my grandmother walks with me, holding my hand, keeping me from falling into the creek. Grasshoppers clatter up from the grass. The sun is so warm. How can anything bad ever happen? Even now a whiff of any of these roadside weeds can make me feel at peace. Even the memory of the scent, on a rainy morning in Michigan! Thank you, PJ!

Oh, Gerry, you have added so much with this luscious comment! I did not say that we had the weeds also in our Illinois driveway, and they were a succulent addition to many mud pies "baked" on a cement strip that was the only remaining bit of a former garage. I am so glad we share happy memories of pineapple weed!