The Making of a Ghost Town 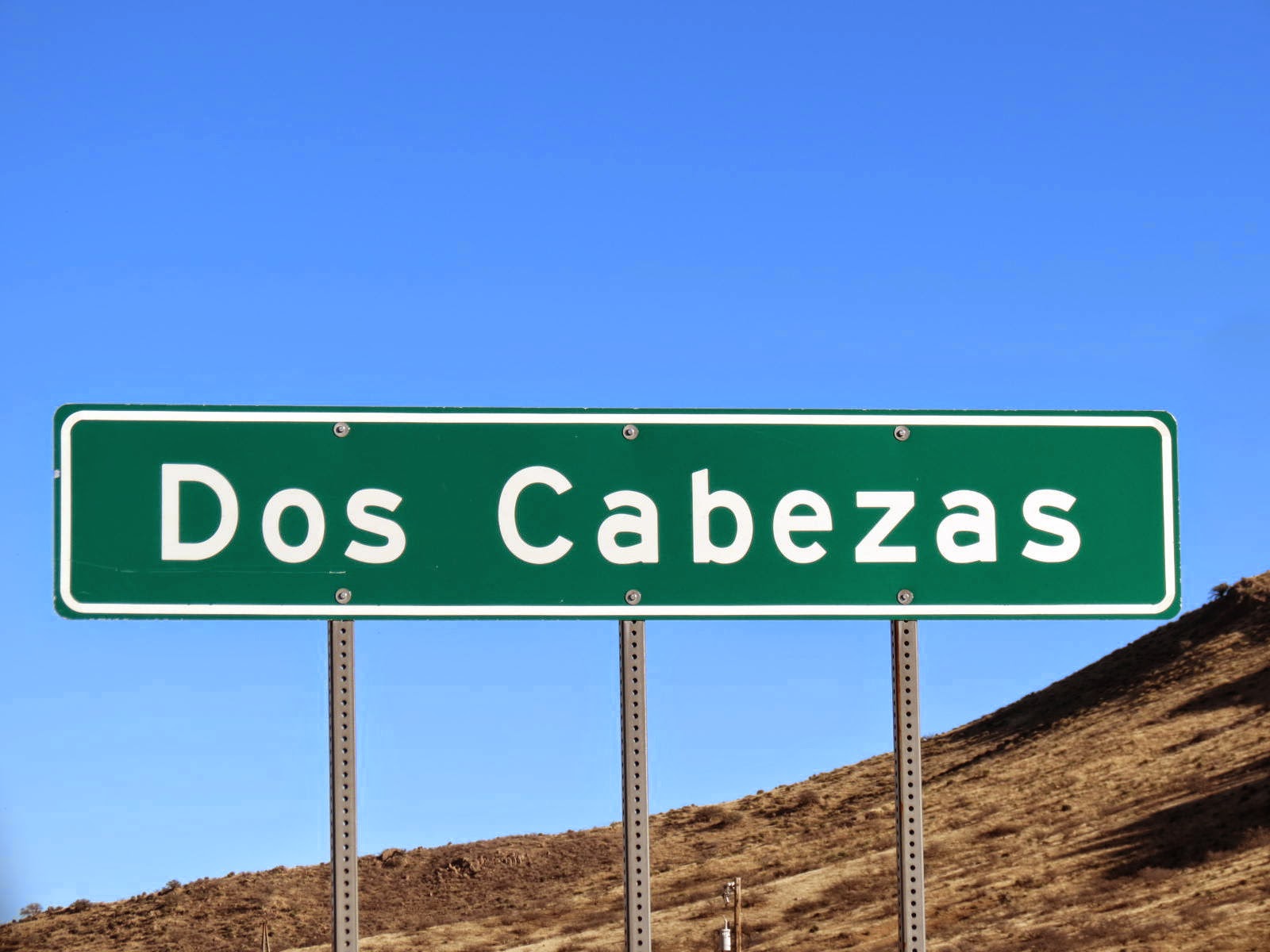 Dos Cabezas, Arizona, began its life as Ewell’s Station, sometimes called Ewell’s Springs, in 1858 as a stop on the Butterfield Overland Stagecoach line. Richard Stoddert Ewell, who grew up in Virginia, was a Second Lieutenant of the First United States Dragoons, stationed in the Southwest in the 1850s, resigned from the U.S. Army in 1861 to join the Confederacy. A Confederate cavalry lieutenant, he distinguished himself in the Civil War, dying in Tennessee at the age of 55. The first post office at Dos Cabezas (1979) bore that name rather than Ewell’s.

Phyllis de la Garza, in The Story of Dos Cabezas, writes of the nineteenth-century stage coach:

The coaches traveled about 120 miles each twenty-four hours, with stops at twenty miles apart. Bad weather, choking dust, marauding Indians, poor food, overturned coaches, continuous lurching and clattering, and an all-too-closeness with fellow passengers soon eliminated anybody’s romantic notions about traveling by stage. Occasionally a distraught passenger would leap stark raving mad from a stagecoach and run away into the wilderness, never to be seen again.

Stage coach travel continued in these parts until the arrival of the automobile. (The one below may be one of the earliest, do you think?) 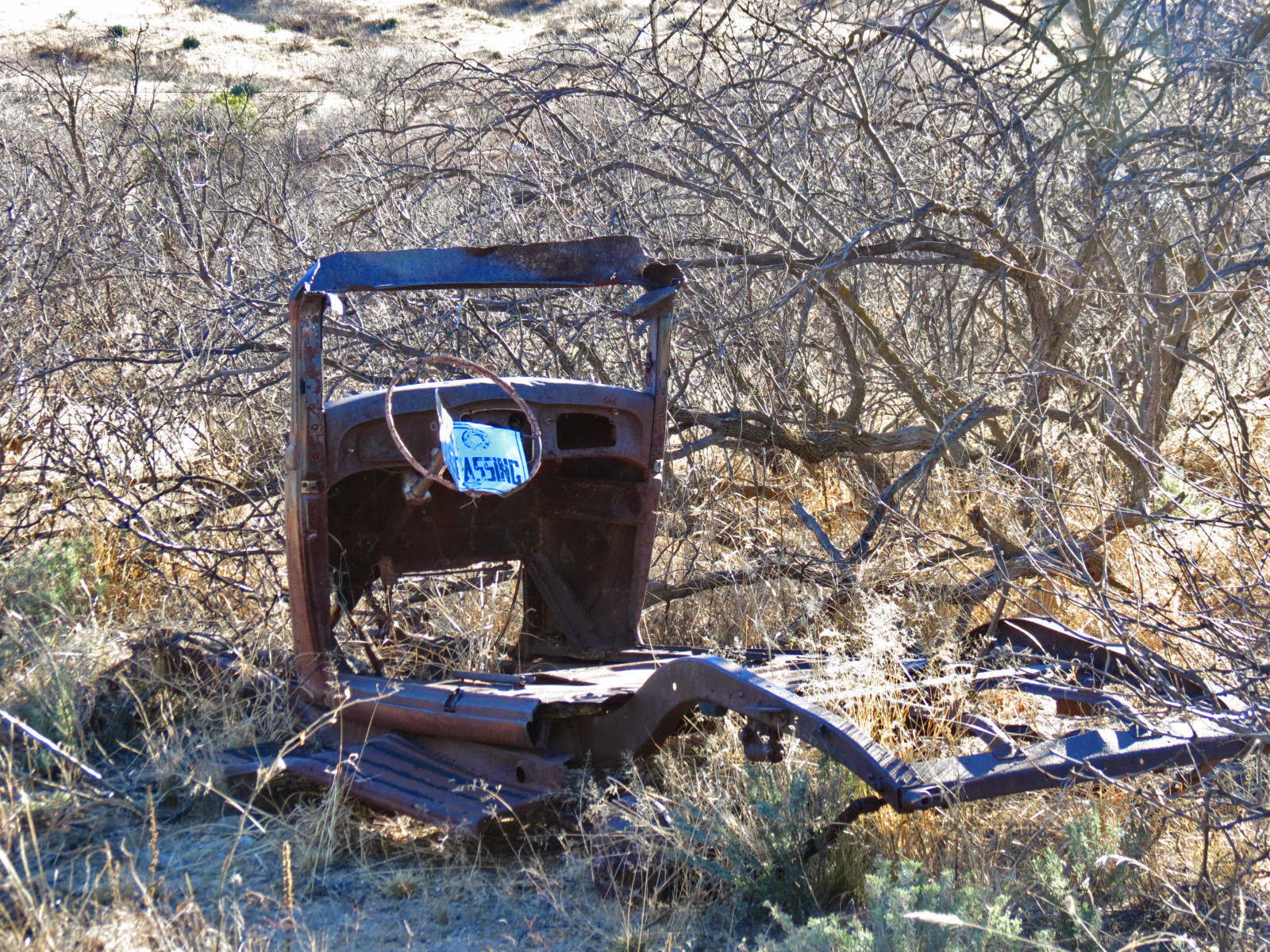 It took more than a stage stop to establish a town in the high desert, but that seems to have been the start, promising enough that by 1888 fifty people were calling Dos Cabezas home, and the little town boasted a dry goods store, blacksmith, wheelwright, and carpenter’s shops, express and telegraph, barber, three livery stables, two saloons, grocery stores, butcher, hotel, and a private stage line office (de la Garza, p. 15). Homestead claims were filed, and men went into business making adobe  bricks for all the new buildings going up. There was hope of a mining boom in the offing. The vision for the region’s future was ranching and mining. 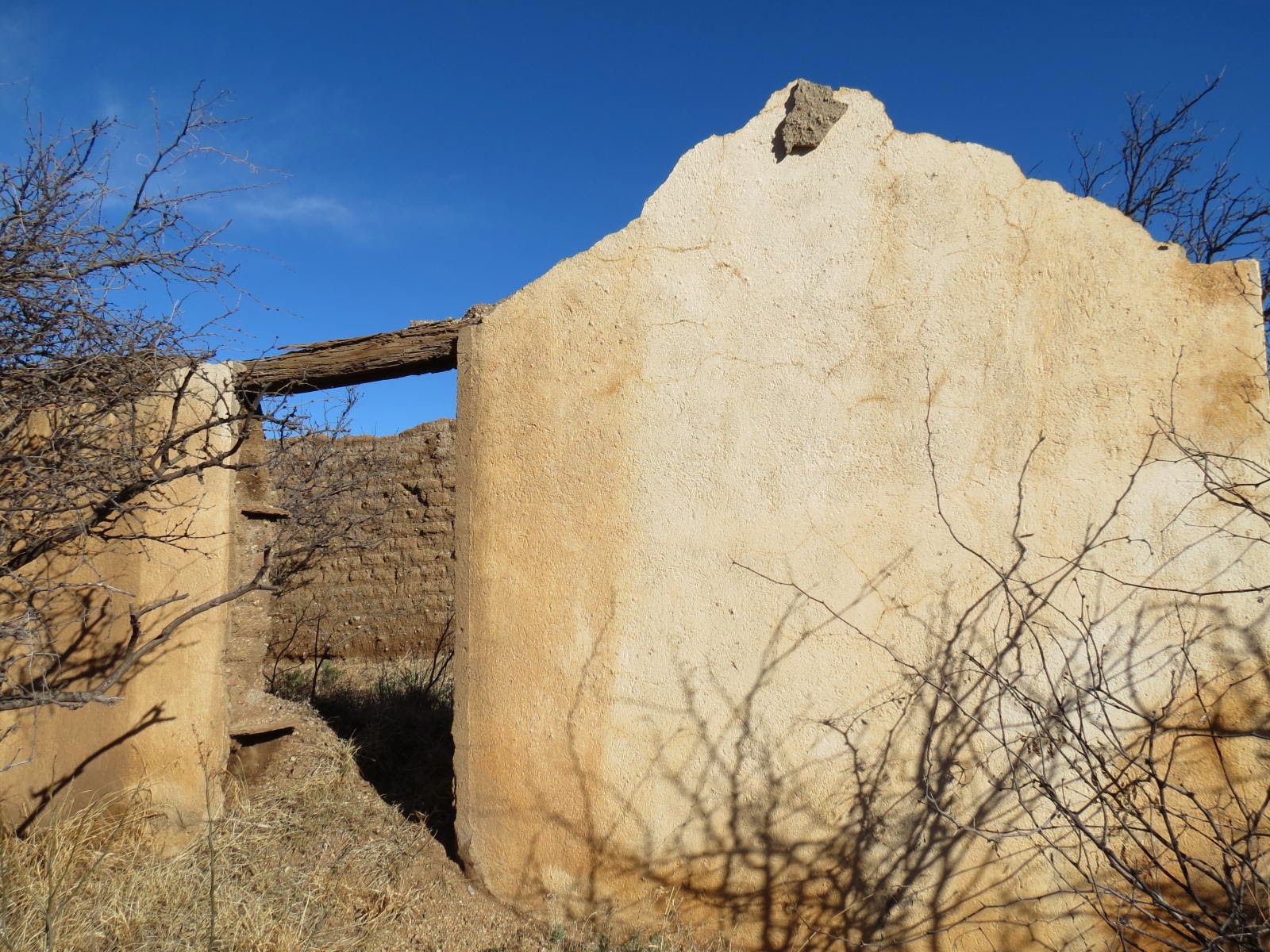 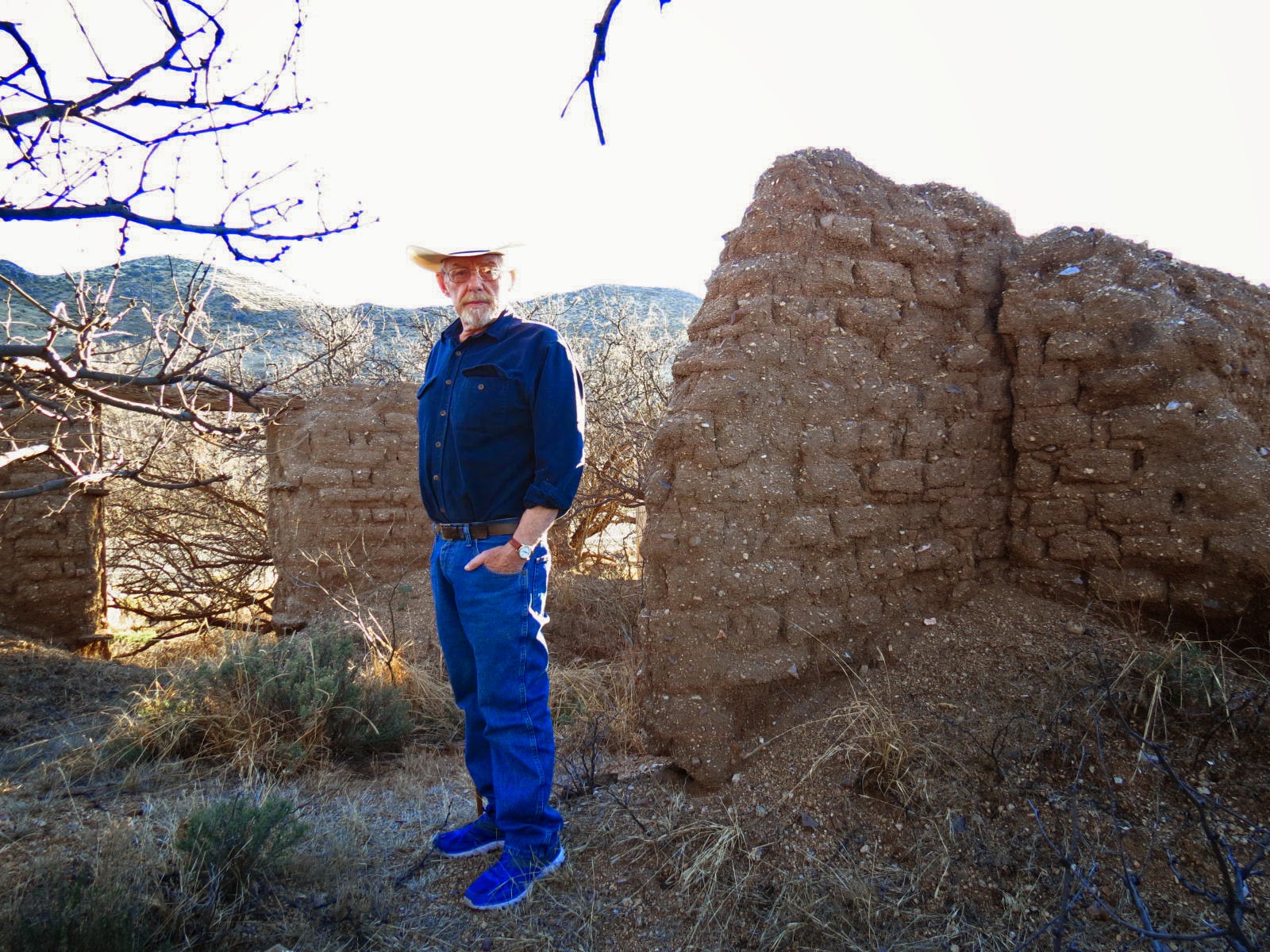 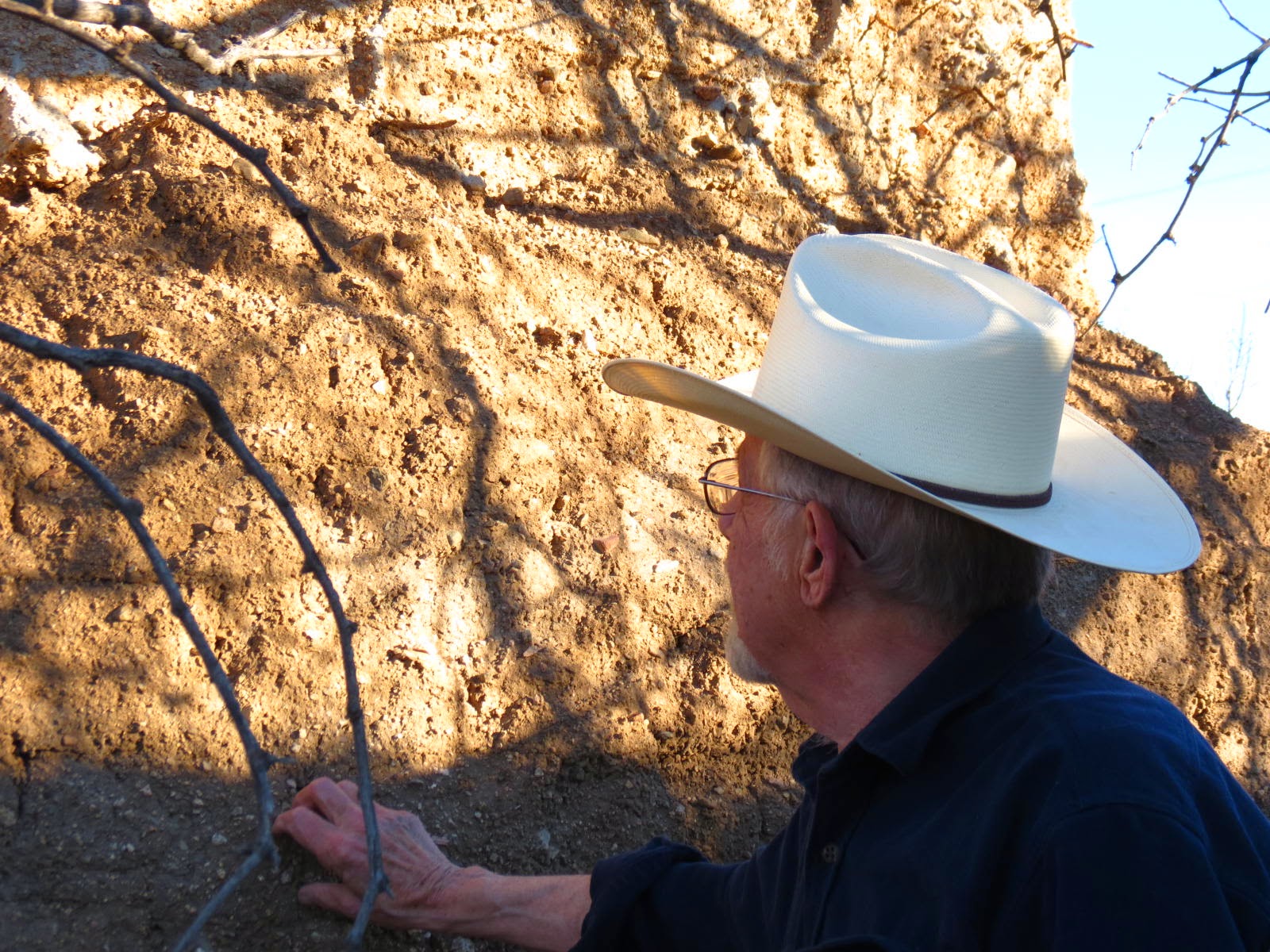 The Bear Cave Mine, located north of town in 1877, produced $40,000 in gold. The 1880s saw Silver Cave and Greenhorn mines in operation, and the Philadelphia mine had nine employees in 1894, and other claims and mines followed, but the gold and silver that came out of the hills was small stuff. Big stuff – or at least the initially appearance of big stuff – didn’t come until the 20th century, with the establishment of the Mascot Copper Company.

Thomas Newton McCauley was a piece of work. Hailed as a “business genius” in his forties, he came to the Southwest for his health but brought along a mining engineer, so as not to miss any opportunities his new home might offer. Soon McCauley was buying up claims, which he eventually incorporated as the Mascot Copper Company, with headquarters in an adobe house in Dos Cabezas. A board of directors was formed and construction begun. Obviously, investors would be needed. After losing a couple of years (1907-1909) to financial panic, the company charged full steam ahead, buying up additional claims. No one thought much any more of finding gold or silver. It was all about copper now.

McCauley really did seem to be a genius when it came to finding investors, and the company’s mining facilities were impressive. All out there in the “middle of nowhere,” so to speak. This is the way the author of The Story of Dos Cabezas describes the countryside:

The area surrounding Mascot Canyon was overgrown with broom bushes, desert willow, cholla, agave, hackberry and chokecherry bushes, black and white oak trees, satol [sic], Arizona sycamores and rosinweed. Narrow winding trails angled away from the main road leading into the hills where people searched for firewood, hunted, or busied themselves after 1914 in more clandestine activities such as operating bootleg stills. Canyon wrens flicked through the razor-sharp bear grass, hawks whistled and banked in the sky, deer, bobcat and javelina scattered noiselessly – their wild mountain disturbed by human activity. Prior to this only small prospect and mining claims dotted the Dos Cabezas hills.

Bootleg stills are beside the point these days, but the rest of the description fits 2015 pretty well.

And yet, for a brief period in Arizona history, the picture of the area was very different. There were schools with growing student populations in Mascot and Dos Cabezas, and the mining valley was home to a large community hall, theatre, stores, dormitories, boarding houses, two restaurants, and more. The year 1915 had seen a railroad constructed between Dos Cabezas and Willcox, Arizona, and in 1920 new mine was opened on the other side of the mountains at Elma, with a tramline and yet another school. It was boom times for Dos Cabezas and the entire area. “Prosperity Day” was celebrated on October 10, 1925, in Willcox, but 1926-27 “marked the final grasp at prosperity by the Central Copper Company” (de la Garza, p. 157).

At the high point of mining operations, the Central Copper Copper Company, “a co-operative development ... almost entirely financed by wage earners,” as reported in the Arizona Mining Journal, had around 800 employees, and the population of Dos Cabezas was said to be over 3,000. Hard to believe today, but the Crash of 1929 came a year earlier in this little community in southeast Arizona. Again, to quote Phyllis de la Garza:

The mine was not a producer. It never was. They knew it had been a front, and yet, there was always that possibility, however slim, that a bonanza strike would be made.

A scam, a swindle? On such a large scale over so many years? Guests brought to view the operation, in hopes they would invest, were shown extensive above-ground facilities – power plants, mills, crushers, etc. Underground they viewed an impressive ore vein, but it was said that the same vein was shown twice, from different directions, as if it were two different veins, and that that ore was never mined but kept intact as an exhibit to attract investors. Some ore was shipped, of course, but very little compared to forecasts that were made. Amazing that “prosperity” lasted as long as it did!

T. N. McCauley went on to a high-rolling banking and development career in Tucson. Funny how men like that always land on their feet. The rest of the population of Dos Cabezas drifted away gradually, until only a dozen families lived here in the 1950s. The school closed in 1953, the post office in 1963, neither to be re-opened, as of 2015. 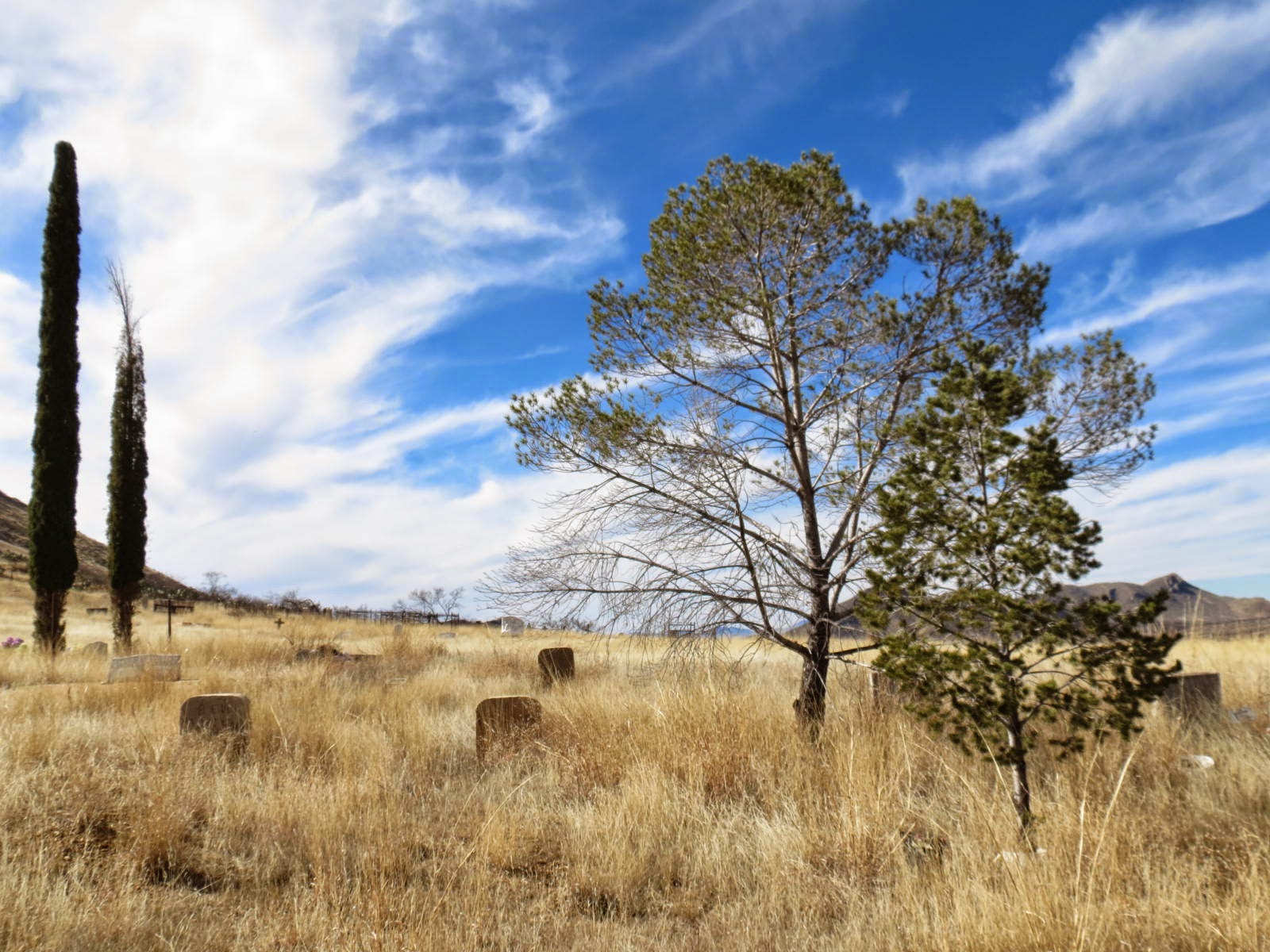 About the only thing “town”-like about Dos Cabezas these days is the cemetery. A neighbor told me that there is a community cemetery cleanup day and potluck once a year. “Other than that,” he said, “people pretty much leave each other alone.”

Surprisingly, there never was, in all its history, boom days and all, a church in Dos Cabezas. Some ladies established a Sunday School briefly for the children, but there was never a church. The same neighbor who told me about cleanup day at the cemetery pointed out a cross on top of a hill to the south. I hadn’t picked out the cross before but now spot it easily when I look to the top of that hill. “Our family used to walk all the way up that hill every Easter morning,” he told me. In the same book from which I’ve gathered and quoted most of the material in this post, I find the author mentioning that cross and clearing up the mystery of its origin.

On May 3, 1935, a cross was planted by a traveling Franciscan missionary who led his followers up the rugged hill overlooking Dos Cabezas during El Dia de la Santa Cruz celebration.

You probably can't see the cross in the first photo below, although it's there, up on the highest hill. 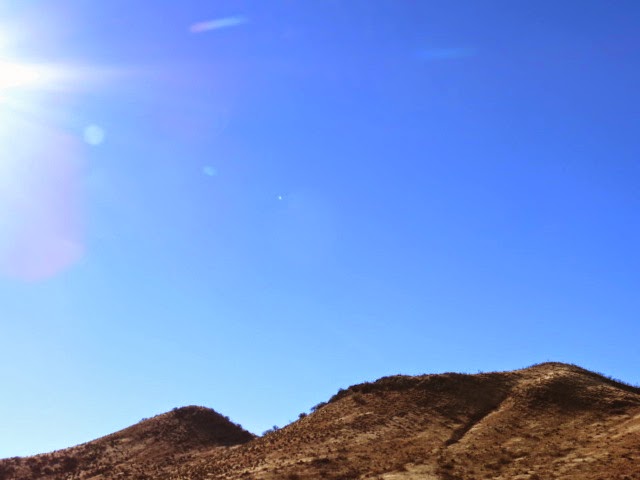 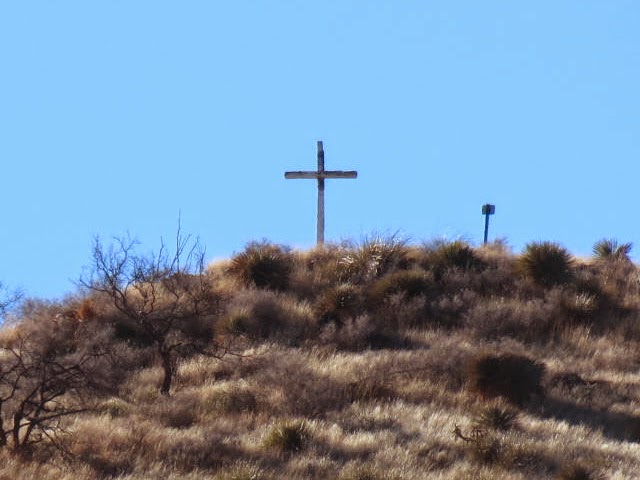 One day as we were driving to Willcox to collect our mail, I spotted another obvious landmark that had escaped my notice until then, and now we look for it every time we travel that road. It’s the old railroad bed, still visible after all these years. 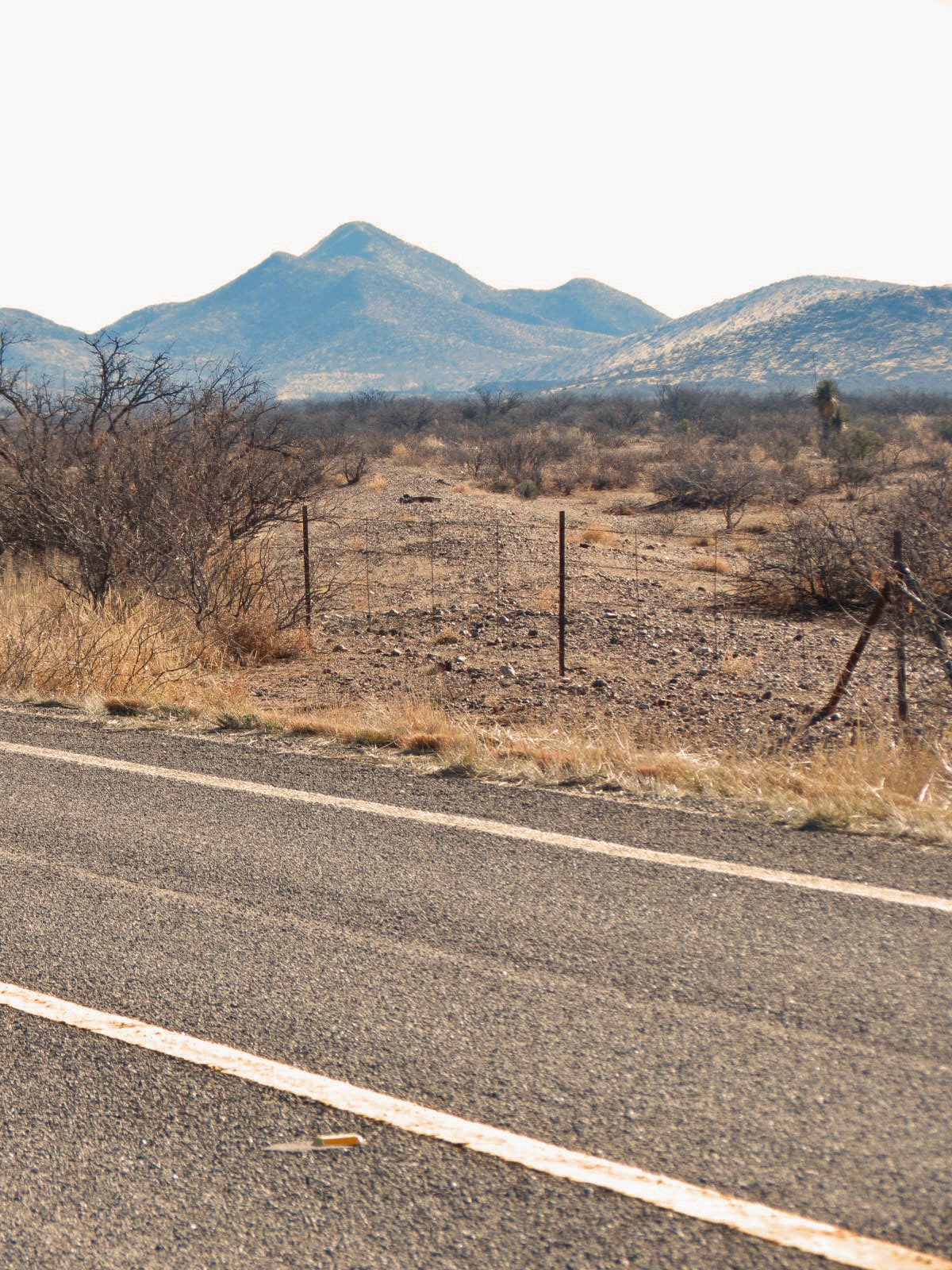 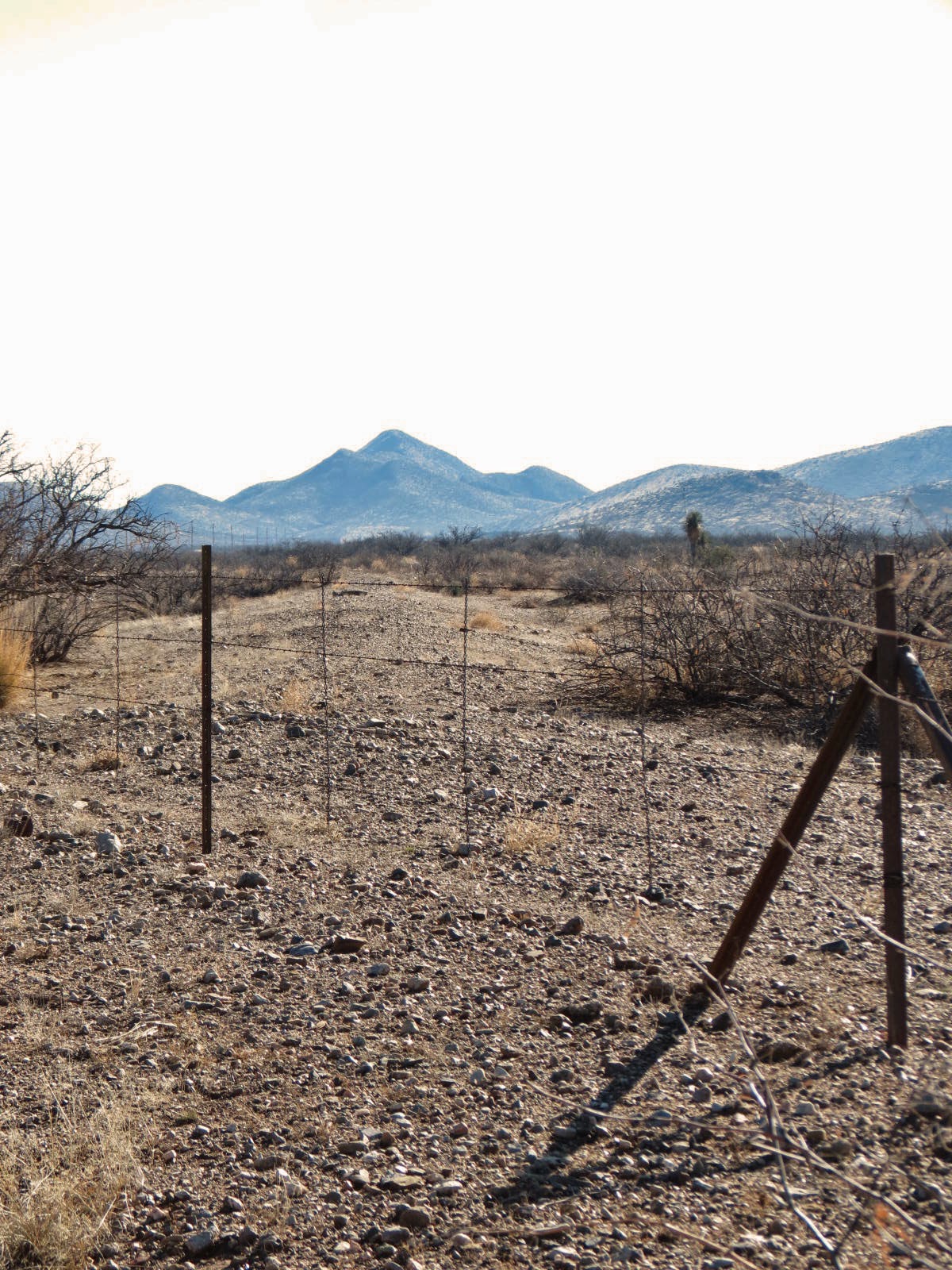 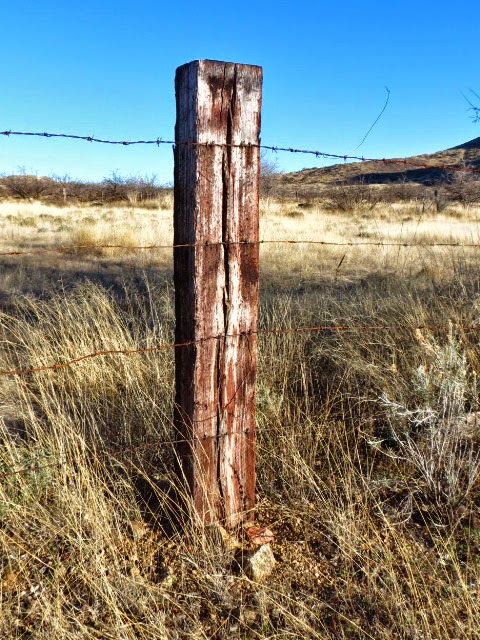 An old railroad bed, old railroad ties, crumbling adobe. A cemetery on a gentle slope and a cross on one high hill. A few rusted vehicles. These constitute the ghost town visible from the public thoroughfare. (More is hidden away on private property, inaccessible to the public.) The other side of the story, also visible, is to be seen in the modest, well-kept homes of oldtimers or newcomers. A ghost town is a very peaceful place to live. I like it pretty well myself.

What an interesting history! I was grabbed right away by your introductory paragraph. Great images too. David looks especially smart in blues.

He wears the Western look well, doesn't he? A guy who has always loved boots and hats has a lot going for him out here!

It seems one can't get away from
ghost towns . :) While they are ubiquitous across the country,
those in the arid west avoid
vegetation overgrowth and stand
as stark reminders of the processes of urban geography.
It makes me think about those
'tels' or mounds that mark the
area between the Tigris and Euphrates, towns upon towns upon towns though the millennia.
(Probably each with a story as
charming as Dos Cabezas. Am
enjoying your travelogue!!

Glad you're along for the ride, BB. Check out my latest post on "A Shot in the Light" for photos of dramatic stormy skies over Chiricahua Mountains last night.

I got a book from the library yesterday on Western ghost towns. Don't think Dos Cabezas will be in it. Of course, back in Michigan we have our ghost towns, too -- right, gang?

Absolutely right PJ! I remember years ago snow shoeing through a ghost town in the UP. I guess if I'd explored it in summer the black flies would have got me. :)