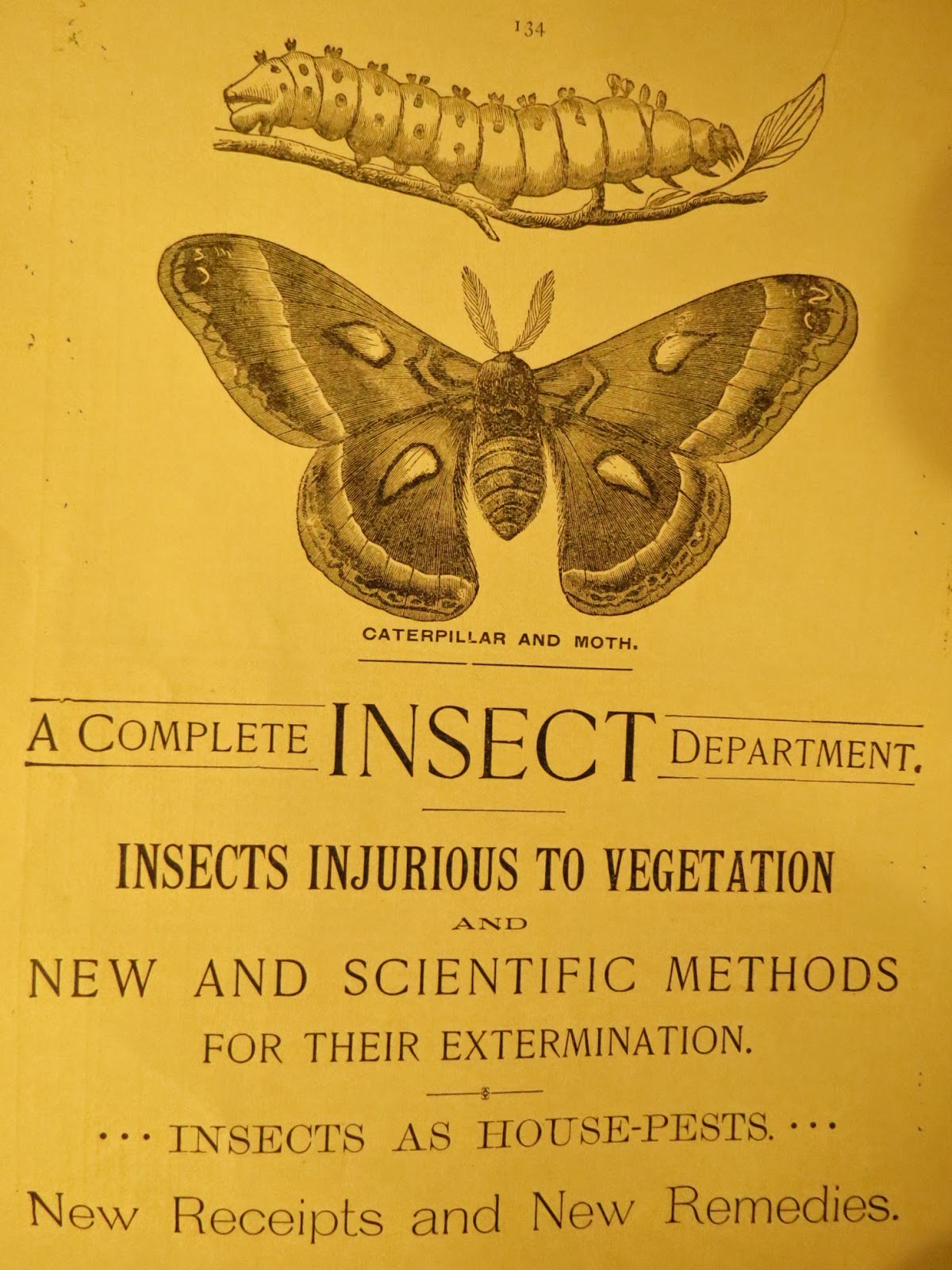 As promised, here are a couple more images from that old, falling-apart book. I'm happy to report, also, that one of the "new and scientific" pieces of advice for controlling insects is to halt the slaughter and extermination of birds.

Millions of our song birds are slaughtered annually to satisfy the whims and follies of fashion. While quails, prairie chickens, partridges, grouse, pheasants and various other birds, that are friends of the farmers, are almost exterminated in order to satisfy the passion for sport. Were it not for birds no fruit or grain could be raised [emphasis added].

Further along on the page it is stated:

The insects which they [birds] destroy in the early season is worth three or four times more to the producer than the highest market price ever paid for these birds as game.

And from ecology we turn back to matters of law and find this very pointed cartoon, one of my favorites in what remains in this copy of The Farmers' Manual. 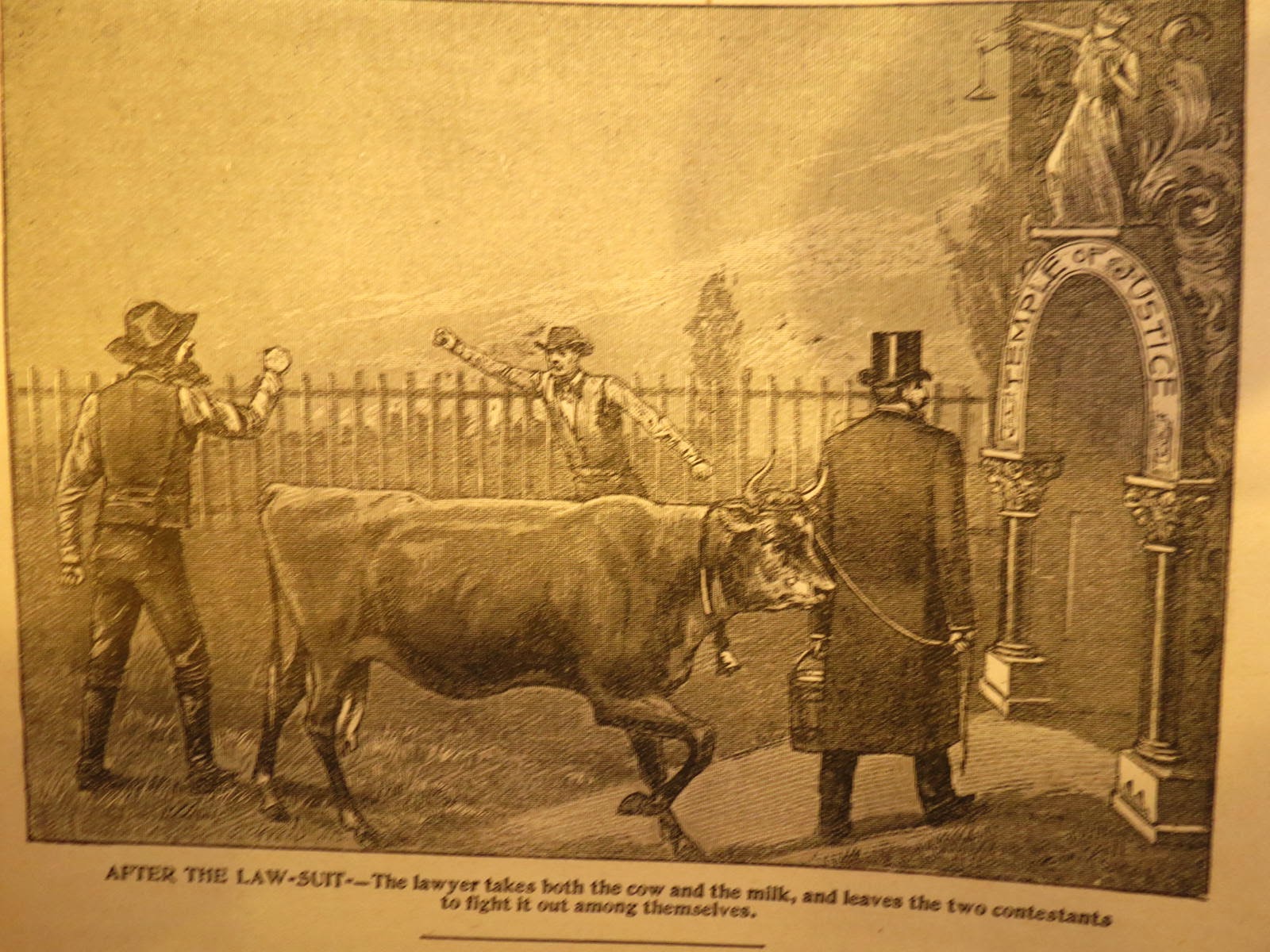 The caption below the illustration, entitled "After the Law-Suit," reads as follows: "The lawyer takes both the cow and the milk, and leaves the two contestants to fight it out among themselves. Think about it....

A friend e-mailed from the road, reporting that the GPS system had gone out on their car. She stopped at the next big box store to buy an atlas, and here's what she had to say about the whole incident:

They used to be in the front by check out--now they hardly have any and they are in the back in the automotive section.  When  atlases and maps are obsolete, how will anyone ever see the big picture? How will they ever know how many choices there are  to get places?  Plus they'll all be indoctrinated in taking orders!  I'm ordering atlases of every place I might want to ever visit so I'll have multitudinous options.

I've always loved maps and atlases and like seeing it all in front of me, on paper, choosing roads and stopping places as we travel. Choices, yes. I'd thought of that before, many times. But I admit I'd never before reflected on how Americans are being "indoctrinated in taking orders" by turning when a robot voice tells them to turn. Wow! 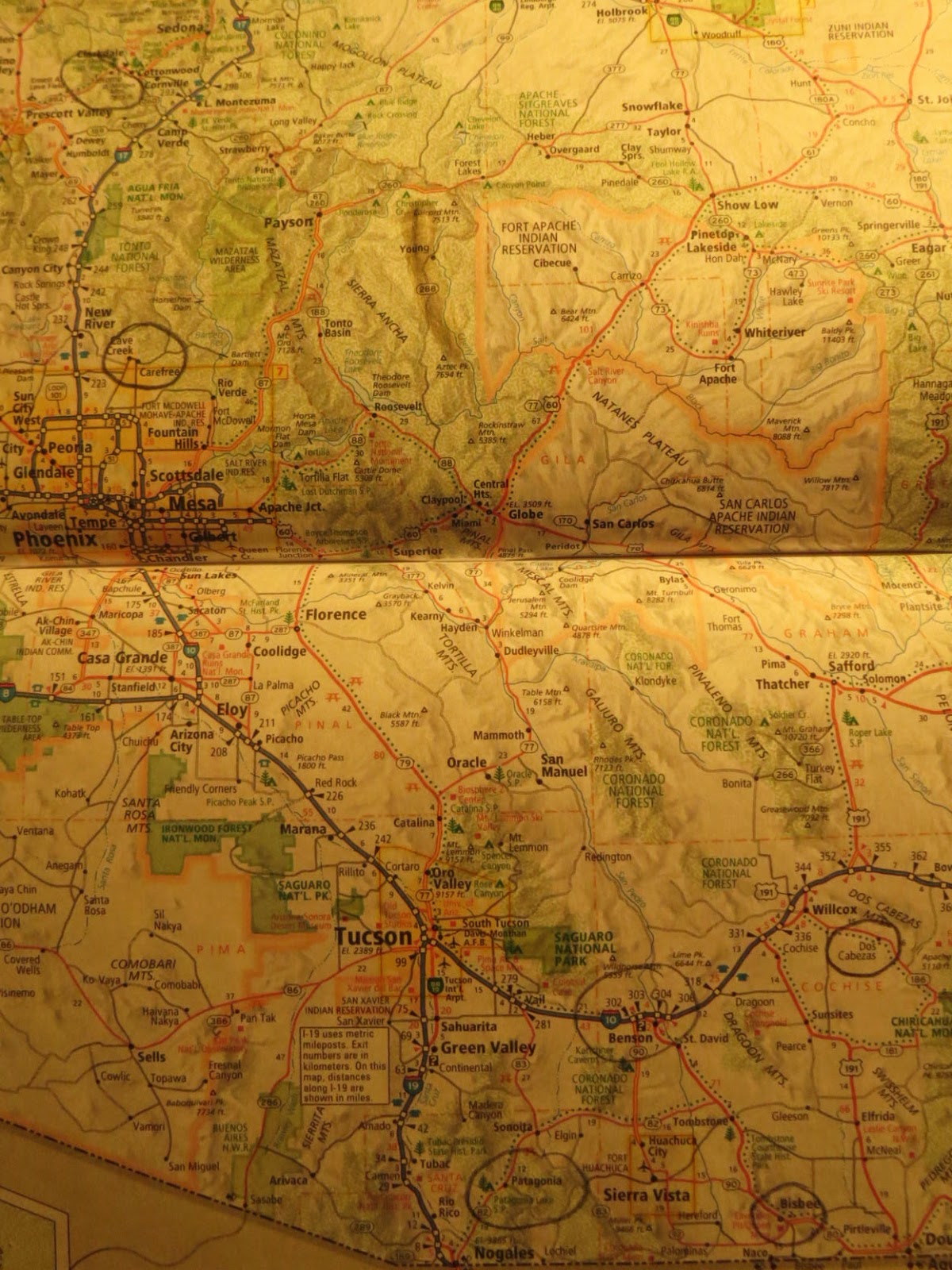 Give up our maps? Maps are one of the things autocratic governments don't want their people to have, and now, rather than surrendering them to uniformed police at our doors, we're nonchalantly shrugging and saying, "Hey! Whatever! Maps are obsolete." Thanks to my friend's story and her reflections on what it could mean for the future, I will treasure my maps and atlases more than ever before. Knowledge is freedom.

Monday evening I finished reading a most gripping, most beautifully written memoir, written by the mother of someone here in Northport.  I've begun writing a review of the book and will post it as soon after Thanksgiving as possible.

Happy Thanksgiving, everyone! Tune in again after your holiday for more news of Books in Northport. And until then, hang onto your maps!
Posted by P. J. Grath at 10:29 AM