Northport’s Farm Market is so beautiful, so bountiful, so well attended and even beloved that it’s hard to believe we haven’t always had it. The Children and the Chard  is a book title idea that jumped through my mind as I was recalling our older grandchildren’s infatuation with the leafy dark green. They were 11 and 12 at the time. It was years before we were living out at the farm and before we’d even had a new well put down, let alone insulated the farmhouse walls or installed a furnace, but I had hand-dug a small garden and hauled water from the creek when the rain barrel ran dry, and we spent as much time there as we could. Then the grandchildren came up for a visit with their parents. Raiding my garden, I made a baked casserole of creamed chard topped with Parmesan cheese.

What parent or grandparent would not be astonished to hear kids asking, “Is there any more chard?” Was it the cream sauce or the Parmesan? No matter, they were asking for more chard! It was a long Pyrex cake pan, and when time came to do the dishes, the pan hit the sink almost clean.

My memory of spiderwort comes from an old friend of my husband’s. Charlie, a former teaching colleague of David’s, offered to give me some plants from his home garden for my little backyard in Kalamazoo, “but only,” he added sternly, “if you will call it by its proper name.” The Latin name? (I didn’t know it then, but it’s Tradescantia virginiana.) No, that wasn’t what Charlie meant. The common name he considered “proper” for spiderwort was snotweed!

Don’t be put off by the name. The flowers are a beautiful blue, aren’t they? They come in clusters, too, so that for many days there is always at least one of the cluster in bloom – and the leaves don’t wilt, but remain sharp and, as I like to think of them, architectural in the interesting right angles they form. 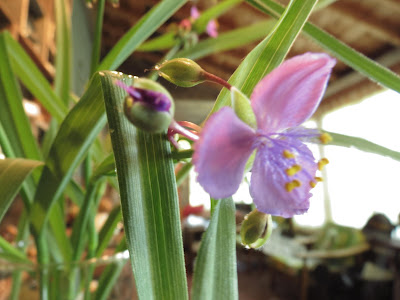 Here’s what the National AudubonSociety Field Guide to Wildflowers (Eastern Region) has to say:

Spiderworts are so named because the angular leaf arrangement suggests a squatting spider. [I must confess it never suggested that to me, so this explanation came as a revelation.] The flowers open only in the morning [but every morning!]; the petals then wilt and turn to a jelly-like fluid. Each hair on the stamens of this showy spiderwort consists of a chain of thin-walled cells; the hairs are a favorite subject for microscopic examination in biology classes because the flowing cytoplasm and nucleus can be seen easily.

Again, don’t be put off by that bit about “jelly-like fluid” or wilting petals. Spiderwort is lovely! It has a relative called Asiatic dayflower (not pictured here), with lighter, brighter blue flowers, and my memory of that is having it grow wild under my Traverse City grape arbor back in 1971.

Back years ago, when I bought my first Audubon wildflower guide from bookseller Prudie Meade in Leland, I would sometimes page through it idly, reading descriptions and looking at pictures while waiting for David to come back from talking to someone about a car or a boat or a trailer, and in this way I learned to recognize wildflowers before seeing them in nature. One day, then, along the north side of Omena Road, back on land that held (then) an old derelict orchard, I found growing between the rows of trees prickly-stemmed, deep blue-flowered plants I recognized from my guide book, and I exclaimed in delight, “Viper’s bugloss!” “You’re making that name up!” David accused. But it’s the real name. What’s the story there?

The origin of the name Viper’s Bugloss is uncertain: The resemblance of the nutlets to snake heads may account for “viper,” which may also refer to the dried plant’s use as an alleged remedy for snakebite, while “bugloss” is from the ancient Greek for “ox tongue,” which the plant’s leaves were thought to resemble.

The “nutlets” in this passage are the plant’s fruit, and I confess I’ve never seen the fruit. I further confess that I would never in a million years have worked out the origin of the plant’s common name. Its Latin name is Echium vulgare, and it is a member of the borage family, along with the hoary puccoon (David’s favorite plant name), Virginia bluebells, and forget-me-not.

The first year I ordered new books to supplement my used book inventory, nature field guides were the top of the list. They are still and probably always will be among my favorite books.

Until then, have a fabulous weekend, Up North or wherever you are! It's shaping up to be a great one already here.

"Viper Bugloss" is also an apt description of an accident (collision) involving a Dodge sports-car and a VW, in which the VW is totalled.

By the way, I would have posted photos of viper's bugloss, had the opportunity slipped by me when the road crews got out and mowed it down.

Sounds a bit scary for a plant name, regardless.

I had some wild grapes today. Sour...

We had spiderwort in our garden for many yeas. Loved it. Love your story about the kids and chard too! Enjoy your week and your author visit today!