Sheer Joy: The Life of Words


Poor Descartes really wrote on the problems of poets: word sense and word sound, math and mechanics, the mind and its body, can they touch? And how, pray God, can they resemble? In the act of love, as in all the arts, the soul should be felt by the tongue and the fingers, felt in the skin.  –      William Gass, “The Medium of Fiction”

In Fiction and the Figures of Life, which contains the essay that holds the lines quoted above, the author makes over and over the point that fiction creates its own world, out of nothing but words. It is not a reflection or representation of reality but an addition to reality, as is all art. Another point he makes is that philosophy creates worlds, too. So poetry? Surely! And drama, of course.

Those who came to Dog Ears Books on Saturday afternoon were invited into the world of Teresa Scollon’s poetry, and the invitation was impossible to resist. More than once we were moved to tears—or laughter. 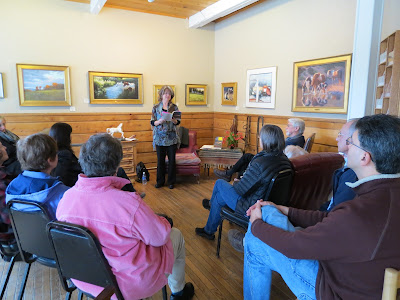 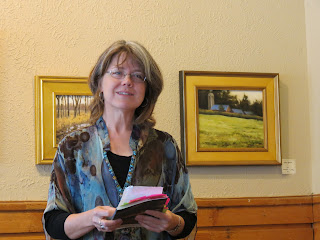 What I’ll say next is peripheral to Scollon’s poems on the page: it’s about her reading of them. Her spoken voice in the room is very like her written poetry, and so it is perfectly suited to her work. Just as these very carefully wrought, polished, moving poems spring from the poet’s unique vision of very ordinary, everyday situations and occurrences, so too her delivery is direct, understated, personal, and completely unpretentious. Is this wisdom she has achieved, or is it simply her essential self? The power is in the work. It does not need to be declaimed and would be badly served by a trance-like voice and presentation, by a reader mounting an invisible pulpit. Here is how the poem called “Autobiography: Falling” quietly begins:

How a bird falls

from a great height


The bird lets itself drop

has a place where

For only a moment.

of it is how

The poem's story grows and goes on from there, and the way Scollon reads, calmly and softly, trusting her listeners as she trusts her own voice, her audience is with her from the beginning and stays with her to the end. In fact, I thought they would never let her leave! It was a marvelous discussion, along with a beautiful reading. What a gift on a bleak, chilly, late fall afternoon! She was delightful! 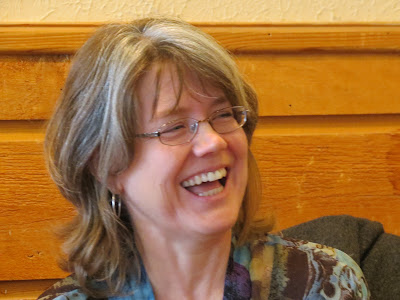 Last night I finished reading Zora Neale Hurston’s novel, Their Eyes Were Watching God. I’d been carrying the book around for a couple of days, stealing moments in its world, and last night I reached the section near the end, with the storm threatening the Everglades, and then Lake Okeechobee blown out of its banks:

As soon as Tea Cake went out pushing wind in front of him, he saw that the wind and water had given life to lots of things that folks think of as dead and given death to so much that had been living things.

Belatedly, Tea Cake and Janie set out to try to outrun the storm. While I was reading (and even now today), another “storm of the century” is threatening the Eastern section of the country in our real-life world. Even without that reality in the background, Hurston’s literary descriptions of the storm in her created world are horrific, hardly joyful, and there is more sadness to come in the wake of the storm. Yet, Janie had found joy with Tea Cake, and I cannot help rejoicing with her over that.

If we are to believe William Gass, Janie’s world is one that none of Hurston’s readers, black or white, have known first-hand: only in the created world of the novel do we meet Janie and Tea Cake and all the other characters. This I believe. And yet, isn’t it also true that some people know people like these characters? And that some who know them are sympathetic and caring, while others stand coldly as far away as possible? To enter the novel’s world, it is necessary to stand close--to stand in the place of Janie and to see her world through her eyes. It is for this reason that, in my more hopeful hours, I see fiction as having the capacity to enlarge our hearts and for real human connections and sympathy.

Can you feel with a character? Do you find that it helps you feel with real human beings--or is the fiction merely an escape from the real world? How is it with you?

It amazes me that I had not read Zora Neale Hurston's novel before, but I am so happy to have read it now. The joy of words is in me today.
Posted by P. J. Grath at 7:53 AM

Blogger didn't used to mess with my formatting the way it's been doing lately. I am not intentionally changing typefaces or font sizes or making weird line spacing decisions. The robot does it. Sorry!

I did not notice formatting issues when reading this, I was entranced with the words. I'm sorry I could not get to the Saturday author reading. I've never been into poetry much, but spoke with a friend of mine who writes it. She said she likes the challenge of making every single word count. I can understand that, and it's made me look at poetry in a different, more positive way.

And when I'm reading a novel I am SO inside the character, sometimes to the point I have to put the book down because I am too frightened about what is going to happen next. Other times I don't want the book to end because I WANT to find out what happens next. If I'm not that into the character I don't really want to finish the book.

Dawn, you've brought my attention to the difference between "not wanting to finish the book" and "not wanting the book to end" (or "not wanting to be finished with the book"). I wonder how many speakers of English as a second language might miss this difference. We say one thing when we don't care enough to go on with the reading, and we say the second when we care very much what's going to happen. Isn't that strange?

I love poetry for the same reason your friend does: it is a distillation, with nothing extraneous. If you are "entranced with ... words," please try reading some poetry!

I've been diving into a lot of escapes lately. I'm in denial about so many things that living in a novel seems only right.

Novels written a while ago, Gerry? I find that reading of political intrigue, assassinations, war, and all kinds of the worst excesses of disagreement IN MEDIEVAL CHINA give my mind a rest from political disagreement here and now among friends. Poetry is good, too. Poetry ifocuses on what's important over the long haul, as are the best novels.

The subject/title of this post brings to mind a book I have read called "The Book of Words".

And no, it was not a dictionary or anything like it.

Was it a novel, dmarks? I suppose I should know, but I don't.