My tribute to Maurice Sendak comes behind the many others that have poured out since his recent death. It’s also somewhat different, too, as I was caught without a single Sendak title on hand. Known for flights of fancy that sometimes took nightmare turns, Sendak spoke openly in interviews about his childhood fears and how, in many ways, he never left childhood. With art that transcended reality, however, the famous and much-beloved illustrator reworked fears and bad dreams into stories and images that comforted generations of readers and admirers. “You are not alone,” his work said to us.

But, as I say, I found no Maurice Sendak books in my shop last week. This is the nature of dealing with used books (the majority of my business): every day is potluck.

Then Peter Sieruta of “Collecting Children’s Books” gave me a broad hint, something I should have remembered myself, which is that over the years Sendak illustrated many books written by other authors. I raced to the shelves, and sure enough—there was an old library copy of The Singing Hill, by Meindert DeJong, illustrated by Maurice Sendak. 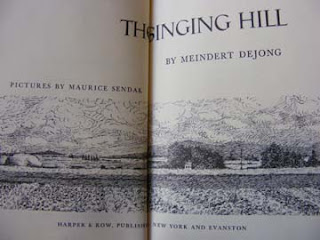 And look at this dedication: 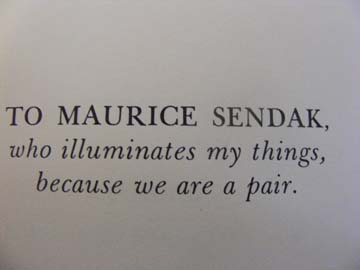 Doesn't that make you smile? 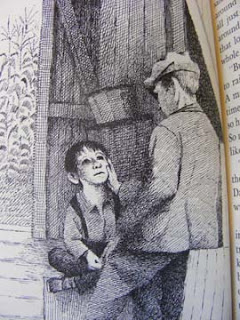 Peter Sieruta had written that Sendak’s early book illustrations were in various different styles, so I was pleased to see that for this book by DeJong the style of the drawings was recognizably and distinctly Sendak. What is decidedly un-Sendak is this author’s story. Adults in The Singing Hill are comforters and protectors. Here is the main character, little Ray (not yet school age), first with his mother (left), then with his father (below). 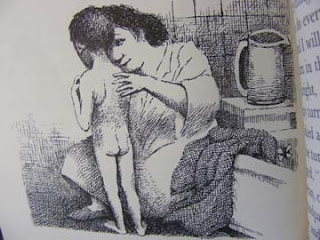 Naturally, Ray harbors secret worries from time to time. What child does not? His older brother and sister’s squabbling and teasing and tall tales feed some of his worries, while others arise simply from the situation of the moment, and there are adventures and secrets galore in the family's new life in the country, but along the way and in the end Ray’s parents come through for him.

This little book pleases me. It pleases me that the author dedicated it to the illustrator and that Sendak, exercising his always-wild imagination, was able to create these loving family portraits. He did, after all, have a lot of love in his life. He loved life, and life loved him back. 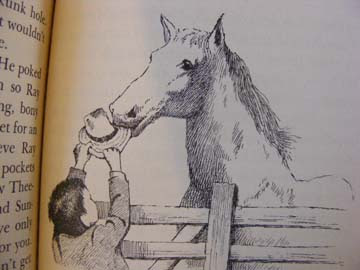 Nice to see these illustrations.. they are beautiful. We will miss him. I always think though, of the children of artists like him, that they are so lucky to have such a body of work done by their parent!

Sendak did not have children of his own. (Some gay men do, but he did not.) He did have a young woman caretaker toward the end of his life who stood somewhat in the place of a daughter.

Little Ray got into some pretty scary and dangerous situations in this story, but it was all for the sake of a horse, and the ending was very happy. I was surprised and delighted to have the story turn into a horse story! Nothing in the title had given me any expectation like that.

Thanks for your comment on my Sturgeon Bay post. Somehow, it ended up trapped by the spam filter. I just found it now and made sure it shows.

This is a tender tribute to Sendak. I think he would have liked it very much.

Thanks, Gerry. And dmarks, I'm glad my comment turned up. I thought maybe I hadn't been able to leave it.

This really is the best tribute to Sendak that I've read.

You are too kind, Helen. Many have written and spoken more eloquently than I on Sendak's life and work, but each of us from a different personal viewpoint. When I come back to this post, I read it now as a preview to my later tribute to Peter D. Seiruta, whom we also lost this year. Unlike Maurice Sendak, Peter and I were were Facebook friends and commented on each other's blogs, so I feel his lost more acutely.