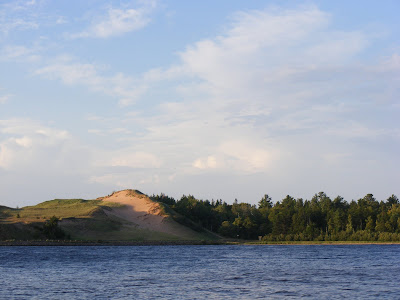 Alternative title: "Something More Than Good Intentions." Above are the eastern end of the Grand Sable Dunes seen from the east shore of Sable Lake, the small lake east of Grand Marais, Michigan. Even coming this far outside of town used to mean sliding around on shifting sands, but no longer. Can you see the road? Not really, but it’s there, between the dunes and the lake, and it’s smooth as silk. Last year when we visited, the paved road had been extended as far as Hurricane River. Apparently, soon after the bridge there was completed, the rest of the project zoomed forward.

“I hear H-58 is paved all the way to Munising now,” a friend commented as I was mentioning various changes we’d seen during our vacation along Lake Superior, admitting he’s “ambivalent” about this particular change. Yeah, me, too. I loved the safari aspect of the old sand trail, on which every trip was an adventure. As yesterday’s post indicated, however, there are still plenty of unpaved sand tracks offering adventure in Superior country, and I must say it’s a a whole lot easier to drive to Munising without first driving south 25 miles to M-28 and then taking the straight-as-a-string Seney stretch west.

My main complaint about the new road is not the paved surface but all the “No Parking” signs and the dearth of pull-off places. Curves and dips are lovely, but the feeling of being on a nonstop “people mover” is disturbing, especially when the road is within sight of magnificent Lake Superior, so near and yet so far away! Notice how there aren’t many photographs to accompany this stretch of road? What’s wrong with this lack of picture?

Further west, though, into the old, logged-over stumpfields, we managed to jump the conveyor belt, and I had a startling thought. 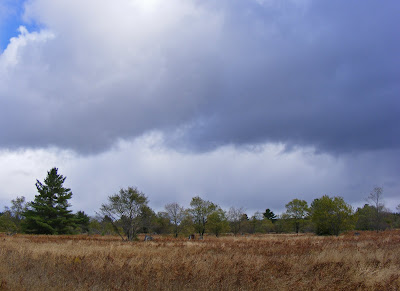 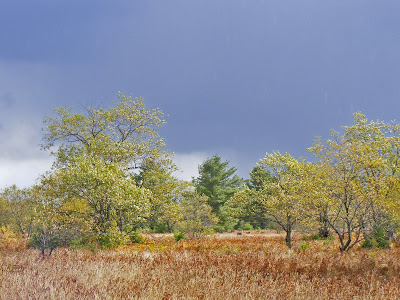 No one loves a raw, new clearcut, but had clearcutting never taken place, these beautiful open expanses with their lovely weathered stumps would not exist. You would rather have an unbroken stretch of forest canopy from one end of the U.P. to the other? Think about what you’d be missing.

There would not be sunlight for wild blueberries on the ground. 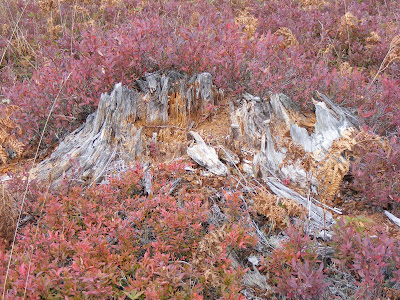 There would not be open sky above to let you see the sandhill cranes streaming overhead. 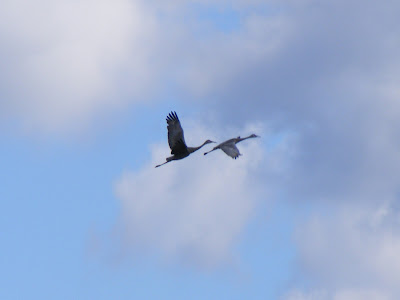 Everything is a double-edged sword. That’s my philosophy of life, and the logged-over areas of the North Country once again corroborate my belief.

We had to stop at Miner’s Castle, of course. The famous landmark has changed in recent years, one of its major turrets gone now, but the view is still breathtaking. 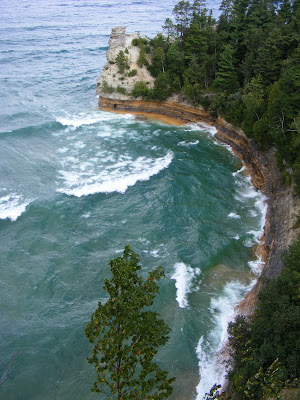 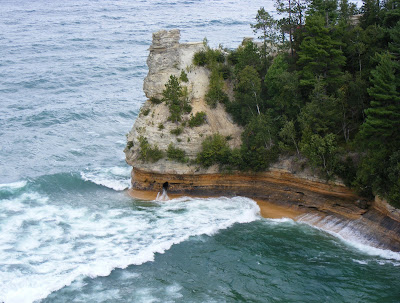 A pause in Munising, then on to Marquette, where the clouds vanished, leaving sunny blue skies for these rowers out on the bay. 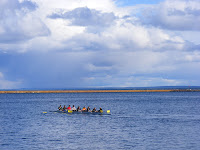 Canada geese seemed content in the sunshine and in no hurry to fly south. Sarah was a bit dubious about mounting the big rock, but when I told her “Up!” she played along. Do you think she knows that U-P spells UP? Probably not, but she's good at playing along with whatever we suggest. (Thought to develop in future: dogs don't differentiate between work and play.) 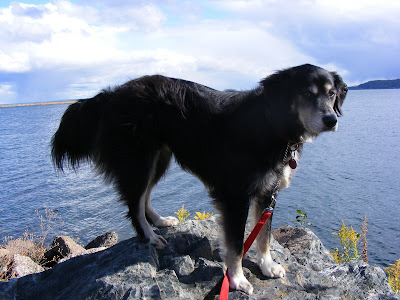 We visited Snowbound Books in Marquette, and Diane remembered me, though it’s been at least a couple of years since I’ve been there. The shop has been freshly painted and rearranged, with a few sidelines added, but retaining its wonderfully inviting, bookish feel. Sorry I don’t have pictures of the bookstore. I was running out of memory on my camera card, and besides, my mind was on—what else?--books!
Posted by P. J. Grath at 6:58 PM

Look at the waves at Munising! What a great trip!

Dawn, I confess I am revisiting these images pretty often myself, reliving the short getaway. But after closing today, I visited a friend who suggested a walk on her Lake Michigan beach. Maybe I can work that into my last Grand Marais post, a segue from one Great Lake to another....

I am having the best time looking at those pictures. You did well. I think I have to get up there this fall. I'm overdue for a U.P. fix. I will miss that sandpile of a road, too, but I am resigned.

Gerry, I'm glad you're enjoying the pictures. Just as your comment was coming in, I was hitting the "Publish" button for my last vacation post. Eight days away from home and four days reliving it on the blog makes a 12-day vacation, doesn't it?

Gerry, I'm glad you're enjoying the pictures. Just as your comment was coming in, I was hitting the "Publish" button for my last vacation post. Eight days away from home and four days reliving it on the blog makes a 12-day vacation, doesn't it?