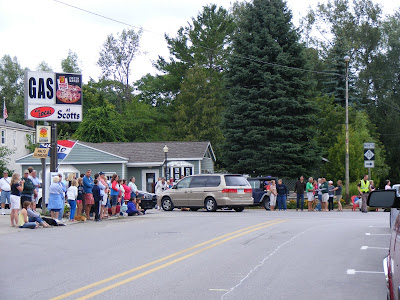 Anticipation for the dog parade begins as early as a year before the event. No sooner has one parade ended than folks begin to speculate on next year's theme and brainstorm on next year's costumes. On the big day itself, anticipation comes to a head, as these photographs illustrate. There are even dogs in the audience lining the streets of Northport. Some (not to mention any names) are dogs who can't be in the parade because they must be at their places of work. 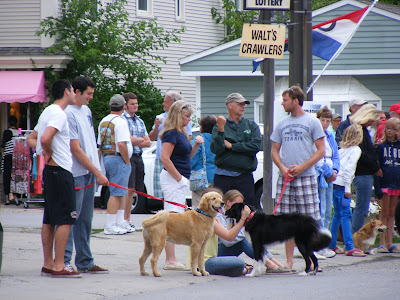 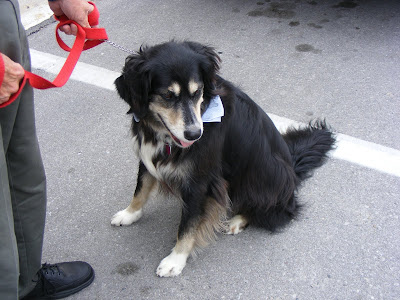 But all work comes to a halt as the parade winds its way through town. Old Jake beat the advance guard, as the oldest dog and the first one down the street. 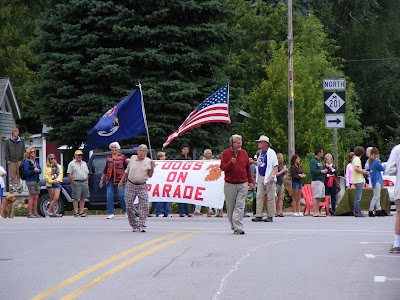 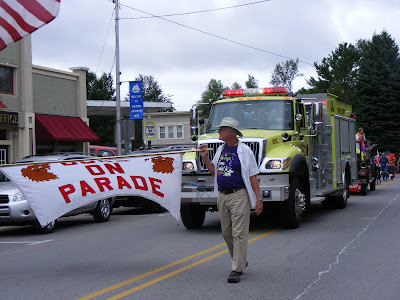 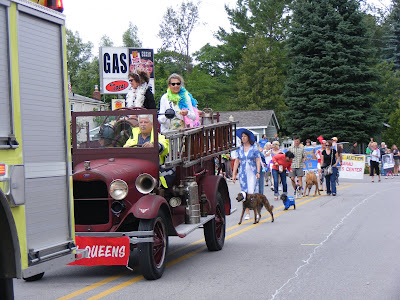 I found the dog costumed as a carpetbagger amusing. You do remember this year's theme, don't you? It was "Dog Gone With the Wind"! 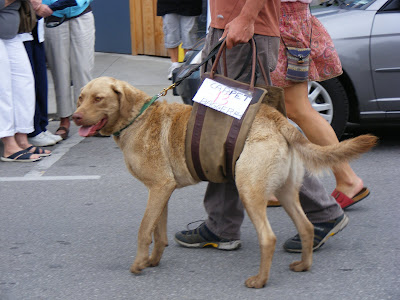 It wouldn't be a parade without a band, and the Northport Community Band pulled out all the stops, as always. 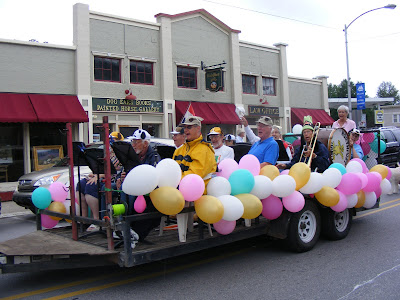 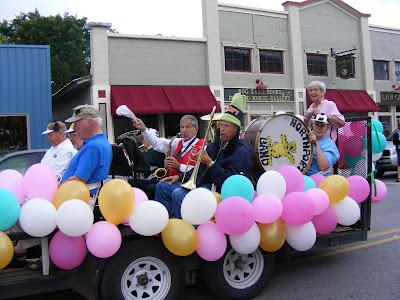 Overcast skies and a cool breeze helped keep dogs and their attendant walkers from being too uncomfortable in Civil War costumes. 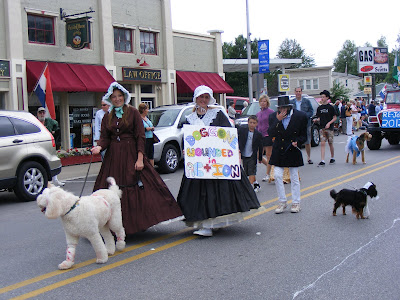 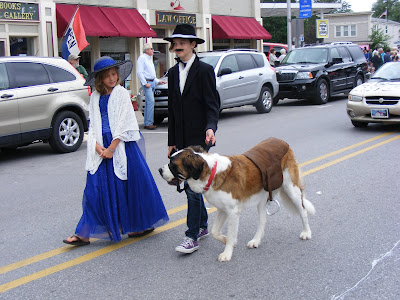 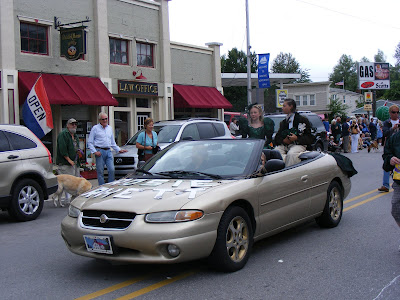 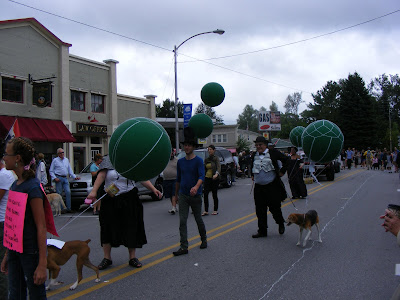 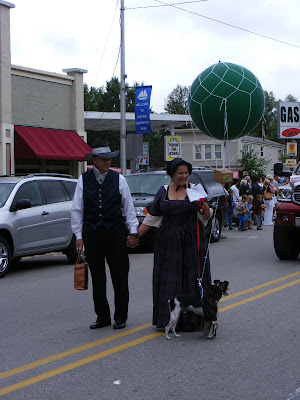 Finally, along came the Grand Marshall and the main float of this year's parade, a brilliant nod to Northport history: 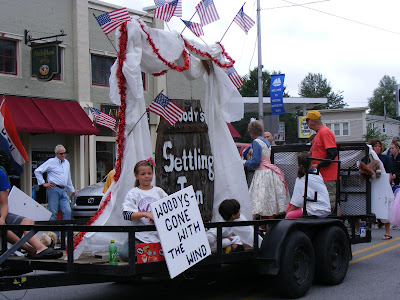 Friends of the Library made a splash, too, as they do every year-- 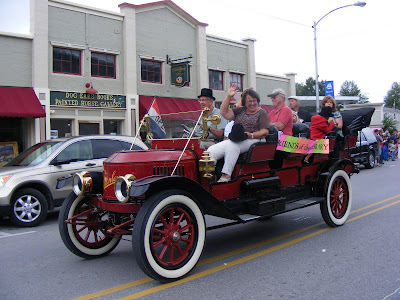 Humans in costume could have fun even if not walking a dog, as this Leland woman demonstrates. 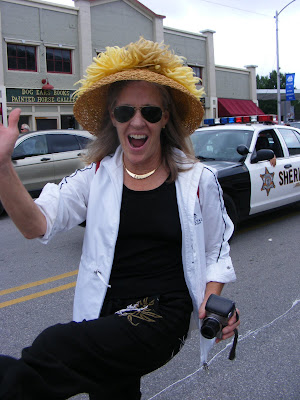 But there were plenty of dogs and kids and grownups in fancy dress. 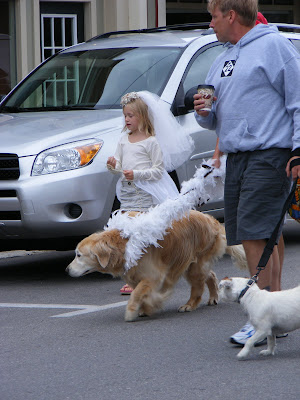 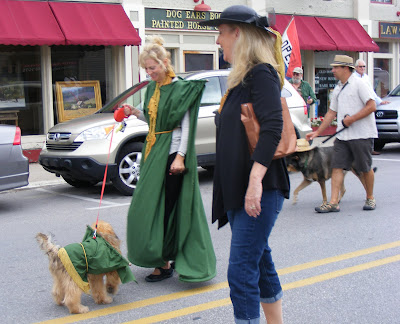 The dog parade is like Thanksgiving--all the preparation and waiting and excitement, and all too soon it's over, Dog Gone With the Wind! 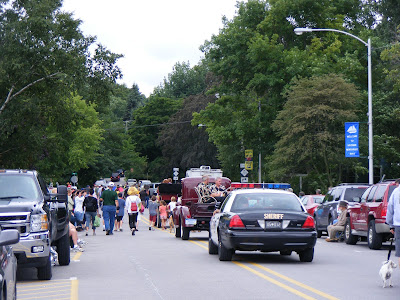 We stretched out the festivities at Dog Ears Books, however, with author John Mitchell on hand after the parade to add personal inscriptions to signed copies of his book, Grand Traverse, The Civil War Era. 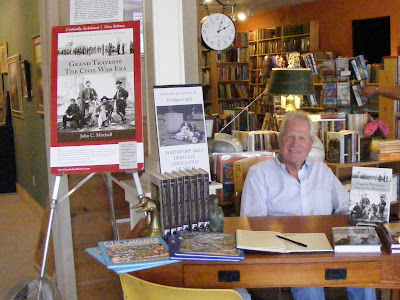 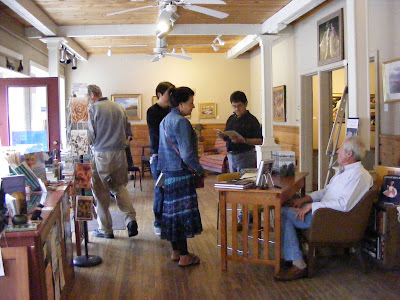 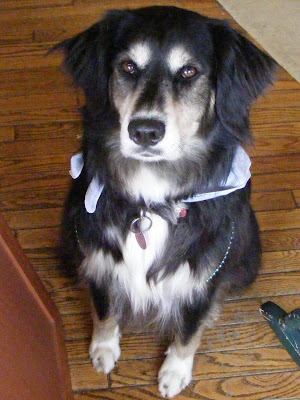 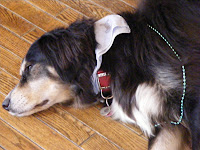 She and I both snagged some parade beads along the way. She also snagged some doggie treats, and the Grand Marshall threw me a Reese's peanut butter cup. It was an exciting day. By the time it was over, we were dog tired. But in a good way.

Excellent day! I noted the photographer managed to get the bookstore in the background on a couple of shots. Good marketing and glad you had fun. Thought of you during my less than exciting rainy Saturday.

Dawn, you noticed! Yes, the first year back on Waukazoo Street I stood in front of my building to take pictures, which of course then featured only the building across the street. Lesson learned. Cross the street! Get bookstore in the shots!