There Are No Small Meanings, Only Small Minds 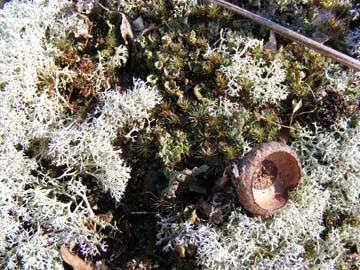 Survival often depends on a specific focus: a relationship, a belief, or a hope balanced on the edge of possibility. – Elizabeth Tova Bailey, The Sound of a Wild Snail Eating

Confined to bed by a mysterious illness and unable even to sit up, Bailey became fascinated by a small wild snail brought to her by a friend in a clay pot of woods violets. Observing the snail gave interest and focus to her interminable hours of solitary confinement and forced inactivity.

In solitude very far removed from that of Bailey’s sickroom isolation, I was studying alone one evening during my first year of graduate school in a small, almost empty apartment in a strange city. The minimal furnishings of my monkish space consisted of a wobbly-legged dinette table, two wooden chairs, a low coffee table holding my typewriter (I sat cross-legged on the floor to type) and, in the bedroom, a futon on the floor and cardboard boxes, on their sides, open end out, holding books. I was lying on the carpeted living room floor when a tiny, bright red mite, smaller than the head of a pin, appeared on the page I was reading, moving purposefully across the lines of type. Had I pricked my finger with a needle to draw blood, the insect would have matched that blood in color. Another living being! I was so pleased! The next day, as usual, I walked to campus. When I told my fellow students about the mite, they all understood.

Bailey’s situation was prolonged and extreme in comparison to mine, and her snail was more than a moment of cheer. It was quite literally her lifeline. Later in her recovery, she wrote of the snail to her doctor:

Along with a highly personal odyssey of immobility (if I may call it that), the author explores natural history and poetry, tracing what others have discovered and noted in the miraculous complexity of this one small, inconspicuous wild creature. The Sound of a Wild Snail Eating is a jewel of a book, destined to become a classic.

Wild snails in my neighborhood would do well to continue their hibernation a bit longer, but I have chosen today’s images (photos taken Saturday afternoon) with snail scale in mind. Perhaps a note on today's heading is appropriate here, as well, although anyone who has spent time in theatre will recognize the allusion. In the world of stage and greasepaint, one is often reminded, "There are no small parts, only small actors." Never a star, I drew strength from those words. 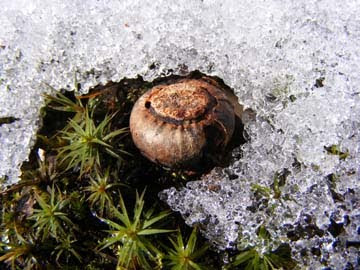 I suspect that not just the devil but the angels, too, dwell in the details. That mite going about its mitey business--what deserts it crossed, what adventures it had!

I'm imagining Bailey, or her agent, pitching the book. It's about being immobilized and watching this wild snail . . . here. Just read the first chapter, OK?

What a great quotation. When I was a teenager I had an albino freshwater snail that I'd enjoy watching while it ate. Its movements were so deliberate and focused. Sounds like a book I'd enjoy immensely.

Yes, Amy-Lynn, I think you would enjoy this book.