Madeline spent a long moment gazing at the town. She understood in a way she hadn’t before that if she drove down that hill, her life would change forever.
- Ellen Airgood, South of Superior

Disclosure: Ellen Airgood is a friend of many years, and I love Michigan’s Upper Peninsula, the U.P., passionately. There, now that’s out of the way, and I can start to tell you about Ellen’s debut novel, South of Superior, slated for June 9 release by Riverhead Books, a Viking/Penguin imprint. 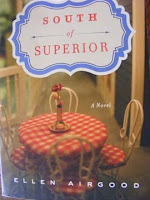 The main character in South of Superior, Madeline Stone, was born in the U.P. but has lived her life in Chicago, where we meet her as the story opens, one year after the death of her foster mother. Still grieving but engaged to be married and without a thought in her head of northern Michigan, Madeline receives a letter. Move to the U.P. to help take care of an old woman she doesn’t even know? Why would she even consider saying yes to such a request? Is she crazy? All Madeline knows for sure is that the life her fiancé has planned for them is one she cannot see herself inhabiting, that it doesn’t feel like it has anything to do with her. Soon she is driving north through Wisconsin in an old Buick loaded down with books, warm clothes and a cat, hoping the car will last long enough to get her to McAllaster, Michigan, a little town on Lake Superior modeled after the real town of Grand Marais. Upon arrival, she realizes that she has come to a place of “magic and perils and tests.”

Okay, my disclosure wasn’t full, after all: Grand Marais is our home away from home, a place David and I dearly love. I admit it. But Madeline Stone isn’t Ellen Airgood, and the other characters in this book, like Madeline, come straight out of Ellen’s head, as near as I can make out. It's within the scope of the novel that they are real. Get it? They are not actual Yoopers given different names to disguise their identities but real in the sense that they come to life on the pages. That is the magic, the miracle, of good fiction. Unwed mother Randi Hopkins, for example, calls forth conflicting feelings of judgment and acceptance from those around her. Then there’s Paul, working a job on the side to keep his little pizza restaurant open. The harsh climate and hard work and community and private struggles are real. I felt right at home in McAllaster and not only because I know Grand Marais, the town on which McAllaster is modeled. 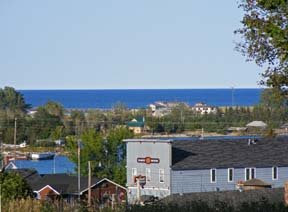 Maybe I still haven’t disclosed enough, but how much do I want to put “out there” for the world to see? I don’t live in the U.P. but in the northern lower peninsula, in a county that has become, like McAllaster, a haven for comfortable retirees and wealthy second (and third and fourth) homeowners, along with summer vacationers. Thirty years ago there was more room on the edge than there is today, but for people trying to make a living here it’s always been hard, as it is for the people in Airgood’s fictional McAllaster. I’m a bookseller in a small, struggling seasonal village, and my husband is an artist. The life Airgood describes is a life we know. We live it.

McAllaster had never noticed the Great Depression, Arbutus had told her, because everyone was dirt poor and starved, only they didn’t know it. But it was different now. Some people had managed to make a little money, just enough for it to go to their heads.

But no, this isn’t one of those simplistic stories where lines are drawn between Us and Them. One of the many things Madeline Stone learns as she gets to know the people of McAllaster is that individuals cannot be characterized according to how much money they have or how long they’ve lived in a place.

The central characters in this novel (like their creator) know about hard work first-hand. They accept it and don’t wish for handouts or pie in the sky. What throws them is what throws all of us from time to time, the unexpected events, the things you can neither anticipate nor control. These people South of Superior are guarding their soft spots, too--the memories that make them vulnerable and the inevitable regrets and unfulfilled longings that haunt every human life. And yes, this very guarding often creates more problems than it solves. A snap decision or a failure to decide, a moment’s attention or inattention, an old photograph, a popular song, a casserole: life’s events turn on small details, in northern Michigan as in any corner of the world, and author Airgood knows that. There is real life in this novel.

I love good regional fiction. Wait. No, I love fiction that pulls me into the place where the story is set, whether or not I know the place firsthand. Whether northern Michigan or Montana or Botswana or Siberia, New York or Paris or London or the coast of Italy—I want to be in the setting of the novel while I read, and that was certainly part of my great enjoyment of this particular novel. But the other, more important piece of living through reading is feeling that one is not only in a different place but inhabiting the characters’ lives, and the further I got into South of Superior the better I knew those people, from the inside as well as the outside. At the beginning we are thrown into Madeline’s life but don’t have much background with which to make sense of where we are. Gradually, as pieces of her past and present are revealed, we learn that there are huge gaps in Madeline’s own knowledge and that much of the story’s conflict is an internal struggle--to learn, to know, to accept and to forgive various people in her life, including herself.

I’m happy about the way this book is being marketed. Since I started to say I love “regional fiction,” let me say now that for too long the North has been seen only as “regional,” while Eastern, Western and Southern fiction has been recognized, for some reason, as “American.” It’s time for the rest of the country to recognize that the North is as American as anywhere else. Up North people worry about jobs, they agonize over whether or not to start a business, they have family members overseas in the armed services, and they fret about fuel in winter and nonstop work in summer and about how to raise their kids and work together in their neighborhoods and towns and cities just like everyone else. South of Superior is as much a novel for readers in south Florida or New South Wales as for those closer to home. As a bookseller, I'm joyously anticipating the chance to offer a novel that accurately and lovingly portrays, with all its shortcomings and struggles, a world I know to be true, a world where real people--ordinary people, if you will--live and quarrel and love and work and try their best to make something of their lives.

I didn’t want this story to be over, and when it ended I wanted to start reading it all over again from the beginning. I am eager to introduce these new beloved fictional friends to my bookstore friends and customers when the book comes out in June. And now Ellen is coming to Northport! The date is Friday, June 17th, just a little over two months away. Mark your calendar now! Until then, you can visit Ellen’s website and follow her on her blog. Can you tell that all of this makes me very happy?
Posted by P. J. Grath at 5:09 PM

I learned about Ellen, as I learn about so many fine writers, from you. I've been reading her blog. I can hardly wait to read this book.

I just checked out Ellen's website and blog for the first time, and she looks like a winning author. Thanks so much for exposing us to good books, Pamela. Karen

Don't be shy about spreading the word, either, Gerry and Karen. It's my pleasure to share this with you.

Pamela...I just went back and read more of Ellen's blog. When I read the "About Me" part, she said she was a diner owner. Is that the diner I asked you about where we got ice cream several times last summer? I wouldn't think there'd be two diners in Grand Marais. :-) Karen

Yes, Karen, it's West Bay Diner, and you're right--the only diner in town!

I can't wait to read it either! Haven't gotten to her web yet...too tired, still here at work, heading home to sick husband...whine...but I will. Love regional fiction myself.

Sorry your hubby is sick, Dawn. Mine seems to be coming down with a cold, and I hope to be as lucky in not getting this one as I was with the last.

You'll enjoy Ellen's book. It will take you back to your Yooper days!