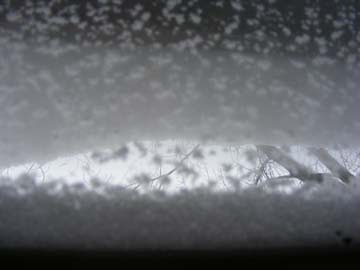 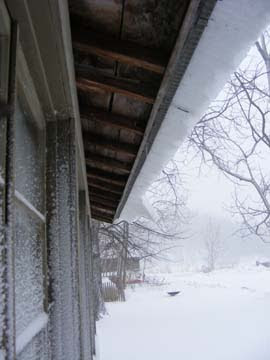 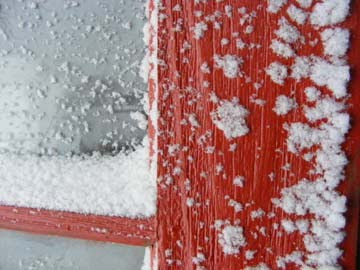 It was the first bear trap that Joseph had ever set, but he was thoroughly satisfied. He leaned over towards the partridgeberry bush, and, picking off two more branches, careful to disturb the crusted snow on them as little as possible, dropped the branches carefully over the trap. Out of the great, snowy silence, a sudden, sharp “Ca-ca-ca!” at his heels startled him. He pivoted about, to catch the gray wing flash of the Canada jay as she swept mockingly to a pine overhead. His boots must have polished the snow to glass underfoot as he worked at the trap. He slipped as he started to turn, lost his balance, fell—and with a mighty snap of great steel teeth, the trap closed over his left leg.

...He was seven miles from camp, and his trail was already obliterated by the snow that had fallen during the earlier part of the afternoon. No one would be sent out to search for him for four or five days....

The big storm was forecast, so there was plenty of time to prepare, plenty of time to lay in tea and chocolate and oranges, as well as time to select just the right long novel to while away a long Sunday indoors before the storm arrived right on schedule. What a difference for Sarah between Saturday and Sunday! 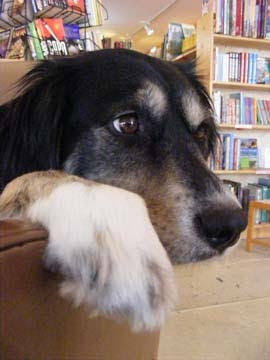 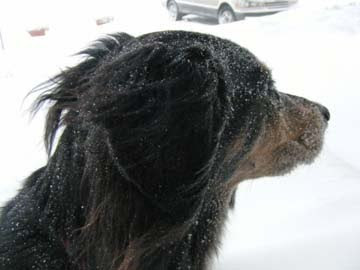 What a difference for me, too. This morning I can stay home with the aroma of homemade cinnamon rolls, anticipating the moment they come out of the oven, and looking forward to a long, cozy day with my pack.

The book I pulled off the shelf yesterday, started reading at the bookstore and brought home for the rest of the weekend is an old classic Michigan novel, Julie Antrocchi’s Wolves Against the Moon. You know how it is—somehow there are always books you haven’t gotten around to yet. Well, this one is perfect for a winter day at home: the action ranges from Quebec City to the Great Slave Lake, down through the Straits of Mackinac and all along the shoreline of Lake Michigan through Indiana to Chekagou. You do recognize that last place name, don't you?

You can read about the real man who is the main character in this novel here, where you will find that his life was a bit different from the fictional account. Would you mind? I don't--because Wolves Against the Moon was written and published as fiction. The author is very clear about this in her preface:

The narrator demands the freedom of action of the characters as they came to life and marched out, masters of themselves, upon the pages. The author hopes that the fictitious characters may seem fully as real as the authenticated ones. If some of the episodes seem overdramatic, this may also be ascribed to the “strangeness of truth.” The author has, if anything, underdrawn the amazing happenings in the old Northwest.

An added bonus is that I had a customer for this same book yesterday, and I insisted she take the copy with dust jacket and map endpapers. Map endpapers add so much to a story, I always think. But later I found in my much plainer copy a newspaper clipping from April 1947 about the Indiana Dunes state park, the area of dune country where much of the Bailly story takes place. The park had opened the summer of that year, and in subsequent years my family made many summer day trips to that Lake Michigan beach. Follow this link for a description and a photograph of the big bathhouse that I remember so well. Lake Michigan! The beach! The scary changing rooms with their clammy, wet cement floors and all those fleshy grown women!

The cinnamon rolls? They turned out great. And it feels great to be indoors today, too. 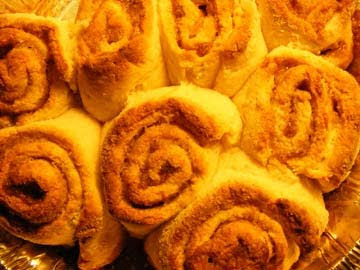 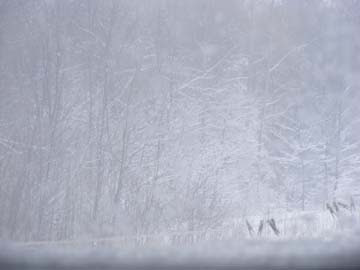 Postscript: The comments about Sarah’s pensive expression told me to show a more engaged aspect of her personality. Call her Snow Dog, or call her Princess of the Mountain—this girl loves the outdoors! 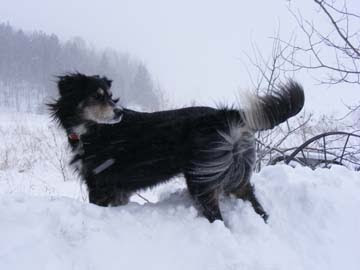 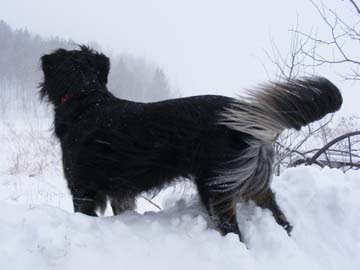 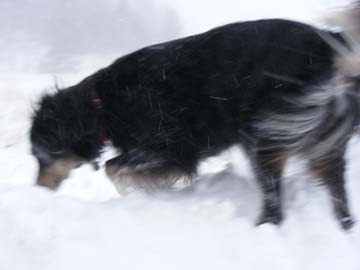 Such a pensive looking puppy, unable to go outside and frolic.

For a contrast, you might try the video that Neil Gaiman shot of his two white german shepherds in the blizzard out in Minnesota. It's in this blog entry.

I'm glad we arrived in Northport before the storm got here :)

Thanks for the link, Walt. I'll check it out. As for Sarah, her life would be so much more exciting if she could read! She's happy to be home today, with intermittent excursions outdoors. I'm glad you and Marjorie beat the storm to Northport, too. See you soon!

See, now, that's one of the differences between us. You lay in tea, chocolate and oranges. I lay in beer, potato chips and sour cream. I can't help it. When a blizzard is coming the first thing I think of is . . . Potato Chips! If I am going to freeze to death in the dark let it be with potato chips on my breath!

Over here on this side of the Bay things are going pretty well. We are plowed out and have power. This is good.

Hope Joseph makes it home. I like happy endings. Can't help that either. Besides, Sarah does look pensive, and she should not become depressed.

We're out of beer, Gerry, but we do have the main ingredient of hot toddy makings, i.e., whiskey. David asked if we had any cookies, so I brought in some of the dough I'd squirreled away the last time I made so much, and soon there will be more wonderful smells emanating from the kitchen.

Sarah is just back inside after another exciting sortie. When I post pictures of her in the snow, you'll see that she saves her pensive looks for indoors.

Glad you still have power Over There. We do, too. And a fire. And piles and piles of books!

Oh, wait! (I knew I was forgetting something.) Not to spoil the suspense, but the bit I quoted from the book occurred at the beginning of a chapter and pretty early in the novel, and Joseph is the main character.

Sigh. Potato chips, dip, baked goods, AND whiskey. These are the things that comfort a body in times of blizzardy trouble.

Your photos are lovely. I wish I had Sarah here (oh, the dognapping fantasies) in Chambana, where we just arrived and it is Very Snowy and the wind constantly moans as it blows through the trees and chinks in the house.

Dip? Who said anything about dip? Sounds good, though. Oh, that was Gerry. How about a big pan of fried potatoes, with a side of steak and mushrooms?

Just a thought, but we got our last dog, Nikki, at the Champaign County Humane Society. You're right in the neighborhood, GH.

That sounds like a good book with which to settle in during a storm. I can also smell your cinnamon rolls. They smell wonderful. I settled in with coffee, tea and wine during the storm. Each at its own perfect time. Am drinking tea right now--Egyptian licorice. Sorry to get you all excited about ball gladder news (as Barry calls it) when I was just posting more river photos. lol! There was a huge traffic jam over to the blog after I posted it. I suppose everyone thought the same as you. Won't know anything until after talking with the surgeon tomorrow.

If you were here this evening, Kathy, you'd be smelling the chocolate cookies that just came out of the oven. We're drinking Earl Grey decaf now. I love its perfume. Will be thinking of you tomorrow and certainly hope all goes well. Somehow I was thinking you had surgery scheduled for tomorrow. Anyway, again, a friend of ours came through the removal with flying colors, and I expect you to do the same. (Hi, Barry!)

Today was windy! I drank two cups of hot cocoa and ate plenty of chocolate. I was going to go out for a walk and take pictures if it was less windy down here. Gusts up to 45-50 mph here. Anyway, I've got all winter in the North Country to take some wintry pictures for all to see... :D

Thanks for the reminder. I need to put on my list "Buy cocoa." The wind seems to have calmed down this morning, but I'm procrastinating on getting dressed and braving the deep cold. Don't freeze your fingers when you take off your gloves to snap the shutter!

Yes, hot cocoa is essential for the winter. I am procrastinating on going outside too. I have some errands to run today and its going to be like jumping in the water when its cold... I just have to say 1, 2, 3... and go outside! :)

My one reward (when I finally nerve myself up) will be Sarah's bounding joy. I imagine your Dechen, like the wise cat that he is, will stay indoors where it's warm.

Yes, Dechen is an indoor cat. Although when I lived on Old Mission last year she loved being outside. Now that I am in a town, not so much. She is obviously a rural/country cat, haha! Dechen is usually waiting at the door for me when I return from the cold. She is so great!