Pages From My Checkered Past 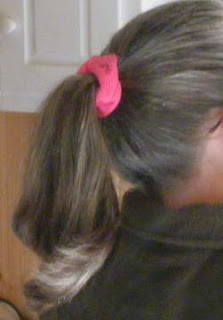 Where is my camera? Where are my pictures? If the camera and pictures show up, I'll add them later. For now, here are my scattered thoughts (first on present, then on past) and one recent picture, showing my true, perennial age: third grade!

Kathy from Up in the Yoop put up a post about her readership dropping by half when her mood dipped. I had an opposite experience this week on Facebook. It's hard to know what will spark comments, either on a blog or on Fb, but my suggestion that Northport Creek's name be changed to Wildcat Creek (in honor of our local teams) sparked a comet's tail of commentary. Some people had suggestions to propose in place of mine, some liked the current name, some told of older names--it just went on and on. I've had similar experiences on the blog, with some random post that felt very trivial to me generating lots of comments, while my (ahem!) very thoughtful mental meanderings "went south," to use Kathy's phrase.

So now for that backward look, whether anyone wants to follow my thoughts in this direction or not.

--Okay, I found one picture, the one depicting not presence but absence: 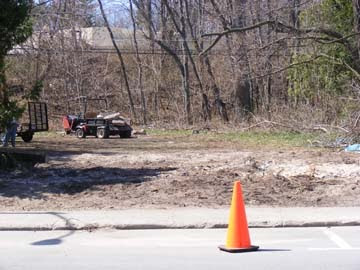 One thing not welcoming us back to Northport this year was the original (1993) home of Dog Ears Books, that little shed down at the other end of the block on Waukazoo Street. Ours was a simple beginning: no heat, no phone, no computer, not even insulation or water—just a few bare light bulbs hanging from the ceiling. David and I sawed boards and put up shelves (I became very handy with an electric screw gun), and when the sign went up—DOG EARS—early summer visitors imagined all kinds of possibilities, one of my favorites being some kind of “fair food,” on the order of elephant ears (but presumably not as large).

There were two sheds, actually, joined together by a false front, making it look, years later, as if a tree were growing up through the building. Not so. The tree grew in the space between the two sheds, but both are gone now, along with the tree. Well, it was time. The property hadn’t been used for years and was looking very derelict, and for me that chapter was closed a long time ago.

In 2003, on the 10th anniversary of Dog Ears Books, I put together what I called a “Nutshell History” (year-by-year highlights, one short paragraph per year), accompanied by photographs, testimonials, and a list of some of my favorite and recommended titles. All this turned up a couple of days ago as I was hunting for some old tax documents. So here today, “in no particular order” (as the list modestly described itself, is the “eclectic assortment of recommended titles...from the bookseller at Dog Ears Books.” I’d add a few more since then, but I still stand by these:

Well, Pamela, I am glad you have had an up week on Facebook. Life is certainly strange... Like you, it seems like some of my deepest blogs not getting much attention and the more trivial ones getting lots. Same on Facebook. Weird.

So did you notice that purpose decision to be a bit more vulnerable and honest with yesterday's post. Per our email last week.

I am going to go back to your book list and peruse it more later. I can't believe you listed Tom Brown Jr.'s book The Tracker. Did you know I went to his school out in New Jersey twice? Once for wilderness survival and the other time for "Philosophy", Native American Style. Thanks for this post!

Which posts get attention: I'm wondering if what we're noticing doesn't perhaps relate to a basic difference between reading online and reading print on paper. Again, somewhere in the last decade I read a book that focused in depth on this distinction, and I have not been able to retrieve the title of author's name yet. Material difference is that of emitted (screen) vs. reflected (page) light. What seems to follow from that difference is that screen attention span is shorter than page attention span. The scariest part is that the more time we spent in front of the screen, hopping from twig to twig, the more our brain changes, shortening our ability to follow complex narrative and argument. So if people aren't reading our "deepest" blogs, it might not mean that what we write is boring in its essence but that the medium is working against us.

You went to tracker school? That is so cool! You are the second person to tell me that, although the first was a few years ago. That book is a real American classic, don't you think?

What surprises me most are how many of those books I have not read. So now I have a handy list to consult the next time I'm feeling book-restless!

So many books, so few hammocks.

The only one I can't dredge up from my submerged memory banks is DELUGE, but it must have made a big impression on me to get on that list.

(I know what you mean about the hammocks.)

It's fun to read the list and see how many I've read. Not enough.

Dawn, the same would undoubtedly be true for me reading someone else's list of favorites.