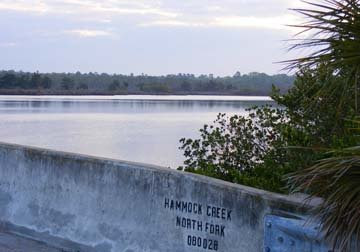 Spring has arrived in time for our final weeks here on the Gulf before returning to Michigan. Recent sunrises and sunsets have been spectacular, and the space shuttle take-off, which we watched from the North Fork bridge, was nothing less than fabulous. (“Nice launch!” one five-year-old said over and over in admiration and approval, as he waved good-by to the astronauts. The next morning people are still saying, “Hey, how’s it goin’? Great launch, wudnit?”) I must report, with a small twinge of regret, that we watched the launch without cameras, but it’s only a small twinge, because being there and seeing it were something we won’t soon forget. 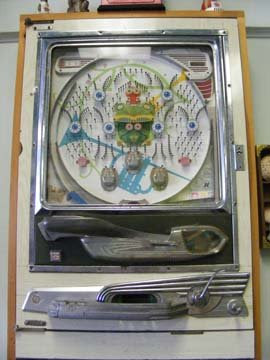 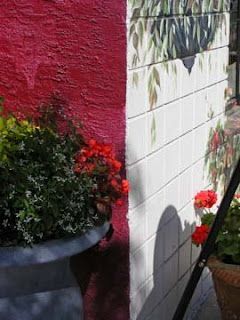 Minor delights did catch my eye in the past few days when I was camera-ready: an old-fashioned pinball machine on a café wall; the juxtaposition of painted and live plants at the entrance to a gallery; a green palmetto floating down a salt creek looking like some kind of sailing vegetable porcupine. Too bad I can’t send the smell of the ocean or the feel of the breeze. I gorge on the sights, smells, sounds and textures of the world around me. 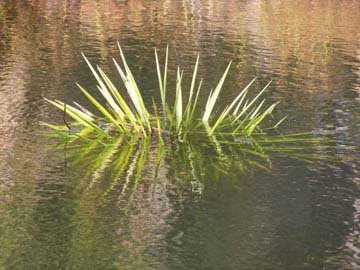 My book binge has not abated, either. Having read Paula Fox’s memoir, Borrowed Finery before reading her YA novels Monkey Island and The Village By the Sea added another background layer to fiction. In each, the coldness and unpredictability of the author’s mother, combined with her father’s weakness and absence, both of which repeatedly put young Paula at risk, are explained and overcome, translated and transformed. I realize now that I have handled books of hers before and that she is a Newbery winner, though I had not read any of her books before Borrowed Finery. So many avenues to discovery! How fortunate that there is not a single road one must either take or miss entirely!

The difference between Fox’s childhood and these two novels is that the literary protagonists have in the background two loving parents, though the mother and father in Monkey Island find themselves unable, for a time, to care for their child. I was reminded of Melanie Klein’s Love, Hate and Reparation (the title of the American edition, Love and Hate, omitted the most important aspect of the theory), in which the famed psychiatrist argued that all of us endlessly recreate and rewrite childhood hurts in an effort to make events come out differently. We seek, in other words, to undo the hurt. This is not to say that Fox’s stories are only interesting from a psychiatric standpoint. Far from it. She has a light and lovely genius for capturing a look or feeling in completely original but transparent language, and the adult reader (this one, anyway) inhabits the world of the girl Emma in the one book and the boy Clay in the other, perceiving the behavior of adults and the complexity of situations and emotions from the child’s perspective, as undoubtedly young readers would, also. It is a dangerous world Emma and Clay encounter, and Fox does not shy away from presenting the dangers, but we never feel dragged through slime. Human beings can be frightening, true. There are also those who are kind. And as the protagonists learn both these truths, they grow in appreciation for life’s ambiguity and contradictions, as did Paula Fox herself. Neither do they miss occasions for happiness along the difficult way. These stories are highly imaginative as well as real and honest and also redemptive. Great combination.

One thing I have to say in my defense (if I need one) for burying my nose in so many books is that my reading has been very eclectic and intentionally so. I may sometimes read two or three books in a row that come from the same shelf , so to speak, but then I make sure the next one is something entirely different. So after two YA novels, I turned next to, of all things, a book on business. It was much more than that, though.

True to Our Roots: Fermenting a Business Revolution, by Paul Dolan (president, Fetzer Vineyards), is as much about leadership and agriculture and wine and ethics and interpersonal communication and community and the good, meaningful life as it is about business. Are you interested in organic farming? In community decision-making? In how teams can function to achieve insight and excellence rather than stagnation and compromise? All this is covered in True to Our Roots, with an explanation at the end of the wine-making process, to boot. Makes me eager to get back to northern Michigan and visit the wineries in my neighborhood to see what they’ve been up to lately.

News from northern Michigan from Michael Sheehan is that this year’s Senior Spelling Bee will take place on Friday, May 1st, 1:00 p.m., at the Gilbert Lodge on Long Lake Road. See the TC senior website or Michael’s own for more details.

Another contest for a different age group is the annual Anne-Marie Oomen High School Poetry prize contest sponsored by the Dunes Review. Any high school student from the area south of the Mackinac Bridge and north of U.S. Highway 10 is eligible to enter. Poems (up to three) should be e-mailed to dunesreview@yahoo.com. Names should not appear on poems but should be included in a cover letter, along with name, contact information, poem titles, short bio and name of high school. The contest rules specify “no rhyming verse, please.” I wish the contest organizers had left style up to the poets, but rules is rules, kids. Does that mean they’re made to be broken? Not if you want to win a contest, I guess.

We saw Saturday’s sunset from Jenkins Creek and its afterglow from the road leading through Hernando Beach and back to Aripeka. 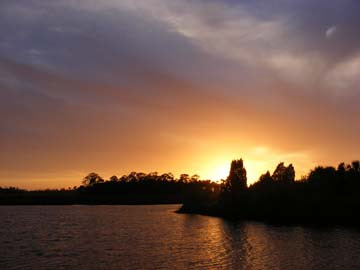 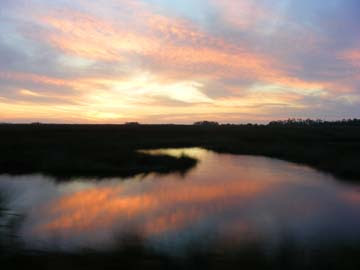 Wow, that last photo is amazing!

These two pictures are surely the inspiration for future paintings I would hope. Enjoy your stay but remember, Spring is knocking on the Leelanau door. Keith

The last one is my current desktop. I always hate to say good-by to the last one when I decide to change, but then I get just as attached to the new.

Keith, are the wild leeks up yet? Have you heard spring peepers? David has a hard time believing me when I say it isn't too early for those, but all it takes is one warm, sunny day, right?