Catsup and Puppies and Books and Flowers

What do you call it?

Catsup? Ketchup? Catch-Up! When I was a kid, in our family we said catsup. Just what it was to us. (Red catsup, yellow mustard, green (sweet) pickle relish. No onions. "Onions don't like me," our mother always said.) We never specified tomato catsup, either, just catsup, but one year in Kalamazoo I made something called elderberry catsup, a fantastic counterpoint to fall game dinners in Leelanau County. This year? Maybe a little red elderberry catsup again in my near future! 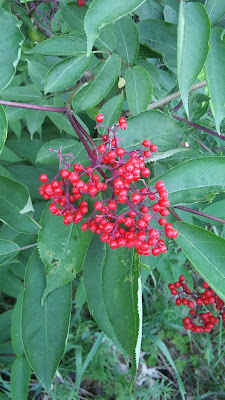 Okay, that whole line of what the Artist would have called quacking is going nowhere. I just needed an opening paragraph, so there you go. Take it or leave it.

I wrote on June 29 that Sunny Juliet and I were going to our first puppy class the next day, because I hadn’t received an e-mail that would have told me that dogs were not supposed to attend the first session! It was orientation for us “guardians,” as we’re called. Oops! Of the six dogs in the class, one other dog’s owners -- excuse me, guardians -- had also missed the e-mail and brought him, so two rowdy six-month-old pups had to be crated in separate rooms while we humans learned what was ahead for all of us.

This week Sunny and I went to the first real class. One dog and guardian pair hadn’t showed up, so there were only five dogs total, each in a separate lane, all facing the instructor, two of the dogs barkers. I cannot lie and say that Sunny is the class star. Far from it! (Though two of the young dogs or old pups, whatever you want to call them, have already been through an infant class and had a running start, so to speak.) But Sunny did not bark at all!She pulled terribly on her leash, but she didn’t bark! Big progress from where she started out in Arizona, as some of you may recall. By the end of the hour she had even settled down quite a bit, and the instructor assures me we’ll get to the desired “loose leash” in time. “Baby steps,” she said encouragingly. So I was happy and told Sunny over and over what a good girl she was. She is doing very, very well on responding to command words. Good dog!

The long drive to way south of Traverse City, an hour in a room full of dogs (the high-ceilinged room seems very full when a couple of the dogs are barking!), and another long ride home again takes a lot out of us both, and then I’m in a hurry to get up to Northport to my bookstore for what remains of the afternoon, SJ quite ready for some quiet crate time. In the evening we will be back together again and happy to play in the yard. And so, yes, day follows day relentlessly, the weeks racing by, summer in full blur-speed --. 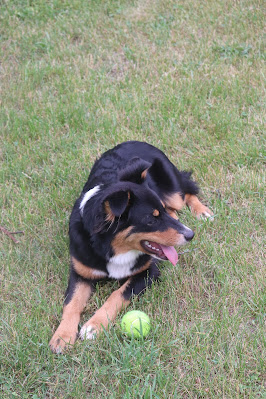 There There, by Tommy Orange, was a novel I had to put aside for a few weeks, after reading all but the last 40 or so pages. Orange is a marvelously gifted writer – no doubt about it. Here is a small part of one of my favorite passages:

…The drum group played on the first floor – in the community center. You walked into the room and, just as you did, they started singing. High-voiced wailing and howled harmonies that screamed through the boom of that big drum. Old songs that sang to the old sadness you always kept as close as skin without meaning to. The word triumph blipped in your head then. What was it doing there? You never used that word. This was what it sounded like to make it through these hundreds of American years, to sing through them. This was the sound of pain forgetting itself in song.

Tommy Orange, There There

My problem with the novel was not the author’s brilliant writing or his vivid characters or even the gritty urban lives and scenes. It was seeing where it was all going to end and not wanting to get there. What with my husband’s death, memorial gatherings, the ongoing political angst in our country, and never-ending COVID-19 concerns (let’s not even mention Ukraine or monkey pox, shall we?), I chose to postpone reading the final chapters until I felt emotionally able to do so. I will say that, in addition to the quality of the writing, this book is important in that it highlights an urban life lived by many Native Americans today, life that rarely appears in American literature, where it very much belongs.

There were a couple books that I did not read carefully but skimmed through and skipped around, so they are not on my list at all. One of these was Claire Bidwell Smith’s Anxiety: The Missing Stage of Grief. I gave it a look-through because grief as a subject matter always catches my attention these days, but I have not had the experience of anxiety the author says she found so often among her therapy clients and was only somewhat interested in that aspect because I have friends who, although not necessarily grieving, do suffer anxiety. But Smith makes the case that the anxiety component can come from long-ago, unresolved grief, and to me that sounds a little like some of Freud’s theories, in that supporting “evidence” can always be found, once the premise is accepted, while it seems immune to counter-examples. Who has not suffered some past loss – if not death, then something else to grieve? Handy explanation!  I did appreciate the author’s insight that the well-known attitudinal stages popularized by Elisabeth Kübler-Ross had to do with people facing their own deaths, not those mourning deaths of loved ones.

A book of letters from and to the artist Mary Cassatt and her circle of friends I read also selectively, not in its entirety. Some of it interested me, some of it not.

I finally read all the way to the last page of The Outlaw of Camargue – mostly for the setting, the Camargue, which I found appealing – though for a while I thought I might not bother. The characters never lived on the pages for me (descriptions of appearance and dress insufficient to make them come alive), the story line was more a thin excuse than a plot, and the defense of royalism left me cold (although heaven knows the Revolution was guilty of violent excess almost right from the beginning), so I set it aside for a while to read the charming God Returns to the Vuelta Abajo, after a couple of nights with Cyrano de Bergerac. The Camargue book is interesting, however, if approached as a travel narrative, so that’s where I have it shelved – in travel and history – though noted as fiction.

Cyrano – oh, my goodness! I have been reliving my own life lately, not only in photographs but also in letters, and after an emotional couple of hours reading from my own archive, how could I help being moved all over again by Cyrano’s story? And I’d forgotten the heartbreaking ending! Oh, heavens! My own love story was much, much happier --. Again, gratitude!

72.      Grann, David. Killers of the Flower Moon: The Osage Murders and the Birth of the FBI (nonfiction) 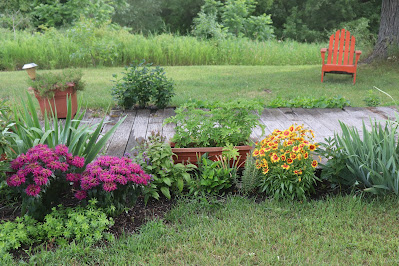 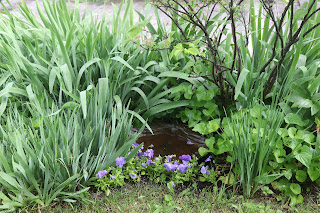 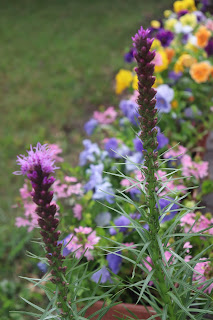 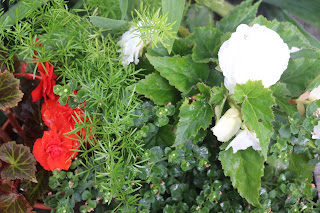 RE: Puppy Class
Sounds like an excellent start. After Finishing School, she will no doubt
debut as a canine librarian, the pride of N Michigan. You girl..dog!

So glad puppy school has begun for you and Sunny and it is going well. I knew it would because you gave her a great beginning in her personal infant class. Loved the flower and garden pictures. Laughed out loud at the ketchup intro. My family used to tease me that I ate a little food on my ketchup.

We'll see if Sunny is ready to be a bookstore dog next summer -- for the 30th anniversary of Dog Ears Books, by the way! Karen, I was going to say we hadn't done infant class, but now I see you said "personal." Ah, yes! Well, she seems to have turned a corner this past week and is much, much easier to get along with, a very good little companion.

So good to hear about Sunny Juliet and her A+ at the first class. The process sounds difficult but with a real light at the end of the tunnel!
Thanks for your comments on books. I’m copying them down👏! So nice to see your blogs…we’ve had visitors and have been out visiting - good to know about how your life is. Think of you so often!!

I don't know about A+ for Sunny in class, but I wouldn't give her less than a B- for her first time in class. The real question is, what grade would I give myself? C, maybe?

How funny, Pamela! My comment came through as …..(mystery music…) Anonymous!! ‘Twas me, Diddly Dee! Now, I don’t know why tou’d give yourself a C, but I think you’re being too hard on yourself. Like people, dogs seem to have a basic personality which (I’m just guessing….) can be altered partially with training, but doesn’t always want to follow what the owner wants. Sunny is SO pretty and lively! And it seems that she is a real good companion. (It’s Bean!)

Ah, Bean! You dear Bean! Yes, Sunny has a basic personality, as do I. Hers is very willful, mine more easy-going, and yet I have to take on the boss role with her. She IS a good companion when we are at home -- but at puppy class? She is TOTALLY distracted by OTHER PEOPLE!!! OTHER DOGS!!! Then I have to remind myself she's also only 7 months old.