Photographer and long-time bookstore customer Angie Wolney was at the Old Art Building in Leland last Thursday for our David Grath memorial gathering, and she shared a few of her photographs with me. The painting on the wall (right) above is one of David's, as you all no doubt recognize. The portrait of David (left), a gift to me by the artist who painted it, is by Joe Borri, and the mounted metal "Art is Life" disk was a gift to David by its maker, a veterinary medicine professor-turned-sculptor whose name does not appear on the piece. (I am trying to find that name in various collections of names, addresses, and phone numbers.)

I'm not sure if this is a "before" or "after" (I think "after"), but on the left you see two members of the Jeff Haas Quartet, percussionist Randy Marsh and flautist Nancy Stagnitta. (Jeff Haas on keyboard and Bruce Dondero on bass are not in this particular photo.) At center are two of David's friends who spoke at the event, Charlie Hall and Joe Tiedeck. To their right are Barb Tholin and Maiya Grath (David's youngest), and finally, far right, Tom Streasick and Judy Livingston. David's iconic "Grand Piano Canyon" is onstage on the easel to the left, David's painting and a portion of one of Jim Harrison's poems reproduced together on the poster on righthand right. Flowers under the lectern are by David Chrobak. Beyond stage to left (behind musicians) is a poster from Summer 1989 with a reproduction of one of David's paintings. Beyond stage to right is Joe's portrait of David and, behind Tom's head, another of David's paintings.

I love the photo Angie took with the OAB sign showcasing its 100th anniversary, the building in the background outlined in lights, guests at the memorial gathering spilling out the door. What a beautiful evening! And obviously, no photographer can resist Leland sunsets, either from the bridge, looking down the river to Fishtown, past the Cove (right) and Falling Waters (left), or straight over Lake Michigan.

Truth: For weeks I had been dreading the gatherings in Kalamazoo and Leland and only wanting to get beyond them, afraid my emotions would be too much for me, that I would be completely done in, a blubbering idiot. After the Kalamazoo evening went so well, my friend Laurie (emcee at both) asked me if I weren't now a little less nervous about Leland. I told her no, because David's daughter had organized everything in Kalamazoo, while Leland was all my doing! But both events came together beautifully, and in fact they helped me a lot. Seeing so many good friends together, having the family all together, listening to everyone's memories of my beloved was a heartwarming experience. So many people felt the loss of David that I knew I was, though still grieving, not at all alone.
When the time came for it to be all over and everyone to leave, I didn't want it to end. And so, four days later, with family was gone and flowers fading, I salvaged what I could from two arrangements and combined them with a few additions from around my yard. The reds glowed in the evening light.
Now, my store of memories further enriched, once again I can say that I have been and am a lucky woman. It isn't that I have finished mourning, but I am coming slowly back to life for at least part of most days. Well, that's one day, and the next brings a setback, but what more can I say? It's complicated. A fuller text of the memorial week can be found in my previous post, here.
If you haven't experienced the loss of someone whose heart was entwined in yours for many years, my reports on gratitude co-existing with mourning may seem an outrageous contradiction, but I can tell you that both feelings are real, and neither cancels out the other. I miss him grievously, every waking minute, and I am deeply grateful for our life together and for our loving family and friends. 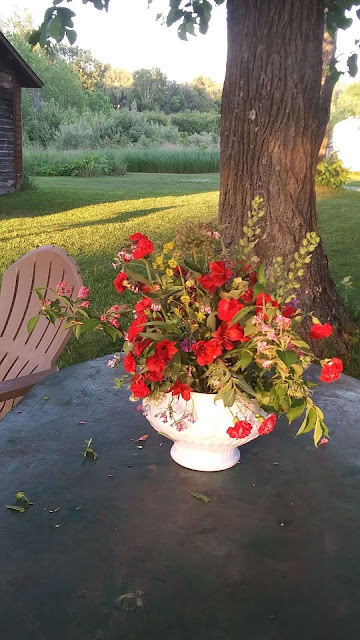