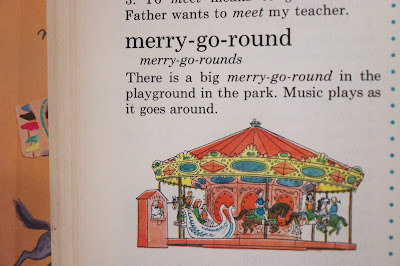 Remember the old Joni Mitchell song? If you’re too young (or need a refresher on some of the lyrics, as I did), go to the video here of Joni herself singing here.

My question is, how did she know all this when she was only 24 years old? The boy in the song is only 20 at the end of the song. Is he already, at age 20, dragging his feet “to slow the circles down”? Wow....

When we are young, anticipation can be more torture than pleasure: “Don’t wish your life away!” my mother said over and over, when I would express impatience for a coming event, and as I recall that impatience lasted into my early 20s. It’s a different story now, and the words have a new and deeper poignancy:

I loved the music and the poetry of “The Circle Game” when young, but it means much more to me now, the increasing speed of the carousel’s spinning a very real sensation, especially in summer. The hours and days and weeks, the sequence of flowers and fruits, the holidays, the entire season – it goes so fast, it’s hard to keep my head from spinning.

But then there is Jimmy Buffet’s song, “The Stories We Could Tell.” Jimmy’s analogy of the carousel (yes, he uses that word, too) is to a musician’s life on the road, which makes me think that Joni’s life at age 24 was much more hectic than mine, since she too would have been on the road, traveling from gig to gig, so maybe that’s why her carousel was going so fast. In his song, Buffet wonders if the traveling is worth it but decides “we do it for the stories we can tell.” So, while we are, yes, “captive,” as Mitchell notes, “on the carousel of time,” we gather a lot of stories as we go along, don’t we? Oh, if only there were time to stop and share more of them on quiet evenings instead of going so relentlessly round and round!

Recently I revisited Alexis de Toqueville’s expedition with friend Beaumont and two Ojibwe guides into the near-trackless wilds of Michigan wilderness past the tiny village of Saginaw. Even their intention to go as far as Saginaw was questioned and doubted by an innkeeper in Flint: Why would a couple of educated Europeans want to venture through the forest to Saginaw? Only 20 people lived there! It was the end of civilization! Does the eighteenth century seem like a long time ago to you? I think I would have preferred it to the nineteenth, given a chance to travel back in time in some other than way than through books.

I only lately “discovered” Penelope Lively and wonder what took me so long. I enjoyed Passing On (1989), liked How It All Began(2012) even more, and was absolutely enthralled by City of the Mind (1991), an exploration of London inhabitants across the years. Her cast stars architect Matthew Halland, a human being more aware than most of the layers of time in his surroundings.

…He is alone, and at the same time less alone. He sees that time is what we live in, but that it is also what we carry within us. Time is then, but it is also our own perpetual now. We bear it in our heads and on our backs; it is our freight, our baggage, our Old Man of the Sea. It grinds us down and buoys us up. We cannot shuffle it off; we would be adrift without it. We both take it with us and leave ourselves behind within it—flies in amber, fossilized admonitions and exemplars.

Language, meaning, the persistence of the past in the present, the terrors of the unknowable future – Matthew never sees only what is before his eyes but layers and layers behind and beneath. Lively’s narrative, too, jump-cuts from Matthew’s London, constantly tearing down old buildings to remake itself by building anew, to London during the Blitz, when survival was the city’s goal. All my philosophical obsessions are addressed in this novel, and yet it skips right along as unstoppably as time itself.

Leelanau County is far from London in a multiplicity of ways, and yet Leelanau too, like London, has its historical and archaeological and geologic layers. Once I made a remark to a publisher wanting to put together a book on the Sleeping Bear Dunes that it would be interesting to speculate what the landscape might look like when the Dunes are no more. She was shocked by the thought. Yet the Great Lakes were not always the five lakes we know in their present configuration, and if mountains are not eternal, how could always-shifting sand dunes be so?

In my last post, I mentioned issues (read “problematic”) I was having with the upgraded Blogger platform, namely the way it wouldn’t seem to let me add books I’d read recently to the top of my “Books Read 2021” list. In that post I included the books I would have added if not for the problem. But now I’m thinking that maybe it’s okay if I don’t keep those annual lists going constantly in the right-hand column of my blog page – where, I now realize, those who read on their phones don’t see it anyway. Maybe it will work just as well or better to include a small note of recently read books into each post. As an experiment, then, following on what I did last week, here are titles of books I’ve read since then. And I hope you making time – because we will never simply stumble over it and find it, like a gift left on our doorstep – to read and relax and listen to the birds this summer.

Waters, Alice, with Bob Carrau and Cristina Mueller. WE ARE WHAT WE EAT: A SLOW FOOD MANIFESTO (nonfiction)

Donaldson, Jean. THE CULTURE CLASH: A REVOLUTIONARY NEW WAY OF UNDERSTANDING THE RELATIONSHIP BETWEEN HUMANS AND DOMESTIC DOGS (nonfiction)

Ah, the little guy! Peasy, officially and legally a licensed Leelanau County dog now, has no idea what a large, unofficial fan club his story has generated! “How’s Peasy?” someone asks every day. 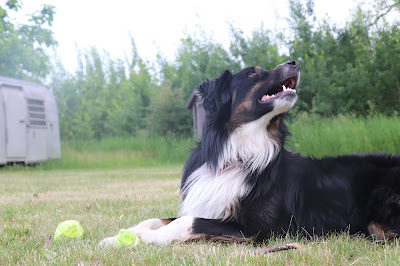 He is doing well. Still shy and skittish and basically unapproachable with strangers, he is happy and healthy and young and strong and -- with his family at home -- very affectionate and loving. It’s almost impossible to imagine these days that we came as close as we did to not bringing him from Arizona back with us to Michigan!

So on Friday, while Bruce was at the bookstore helm for several hours, the Artist and I made a foray into the wild traffic and crowds of Traverse City, marveling (rather horrified, actually) at all the new buildings and feeling like a couple of Rip Van Winkles.

But we managed to get our several errands done with maximum efficiency, one of mine being dog-shopping. -- Not shopping for another dog, but shopping for things for the dog we have: a new, “indestructible” ball to throw around the yard for him; the sturdy, long-lasting type of chew I bought for him at the feed store in Willcox, Arizona, that is so hard to find here (McGough’s feed store is the answer, and I bought three); a package of little soft treats; and a leather toy whose nose he managed to destroy minutes after having it in the backseat of the car. That’s okay. If he prefers his alligator -- or whatever it’s supposed to be -- without a nose, it’s his choice. It’s his toy.

But while he loves his new ball and the chew and the toy, the truth is he’s just as happy with an old plastic bottle. He is, after all, a dog through and through. 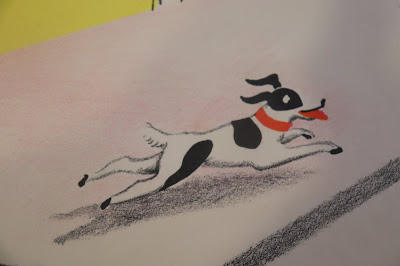