Until it does no longer more (an hour that comes eventually for us all), life goes on, here in the high desert and mountains as well as back in northern Michigan and everywhere else that that shelters family and friends. Sunrise, sunset, both moving north now that the equinox is past. Who knows how long we will be here or if we will be here again? But we are here now.

Spring has played hide-and-seek this year in Cochise County, Arizona (as it always does back in Leelanau County, Michigan), and I see in my photographs of previous springs that wildflower blooms are tardy this year, compared to the last two. This is also the dustiest year we (the Artist and I) have ever seen here, though not necessarily the dustiest that has ever been. Dry, dusty, and very windy. I attribute late wildflower bloom and more frequent dust storms to a common source, drought, but that is not one of my three topics for today, so let’s move on. 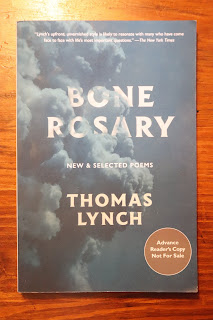 When a mature poet offers us “new and selected poems,” it’s cause for celebration, but such a best-of-plus album is not to be hurried through in an evening or two. Initially I wanted to publish a post about Thomas Lynch’s new book for St. Patrick’s Day. Then for the book’s March 23 release date. And now – well, here I am, still gratefully reflecting as I linger over pages and turn back and forth to re-read.

Reflection invades poems that first appear to be simple snapshots. All the “heaving, tidal pulses of creation” are here. Do they rise from quiet hours of preparing bodies (the poet a funeral director in the family business since 1973) or simply any Irish man or woman’s penchant for dreaming and regretting? Or, most likely, the gift of poetry itself, bestowed unpredictably, like grace and then refined and distilled by the earthly craftsman. Particular poems pull me back to church, to Michigan waters, and then across larger salt waters to the land of my mother’s father, land I’ve never seen,

between hayricks and Friesians with their calves

considering the innocence in all

God’s manifold creation but for Man,

and how he’d perish but for sin and mourning.

two parishes between here and the ocean:

a bellyful tonight is what he thought,

please God, and breakfast in the morning.

The Sin-eater fills his belly at the bedsides of the dead, consuming their various sins along with bread and beer provided by the family of the deceased, that their dear departed might not languish forever in purgatory. After he“feasted on Easter Duties missed,” along with more repulsive sins that upset his digestion and gave him bad dreams, from time to time he considered retirement (or raising his rates, at least) but feels his living to be a mission equal to that of the priests. Although the twenty-four pages of poems selected from an earlier collection, The Sin-Eater: A Breviary, initially struck me as longer than I wanted to spend with old Argyle, I find now that it is these poems that haunt me, much as Argyle himself was haunted by the dead whose sins he had consumed by their bedside.

Which is not to ignore new poems that stopped me in my tracks. America and Ireland; families and outsiders; landscapes, realities, and fantasies (the fantasy of “Casablanca”); the quick and the dead; cats, cows, dogs, and horses – not only the Bible-inspired but all Lynch’s poems are about “the spiritual life” as he understands it, which (he tells us himself) is faith in “the life of language and its power to make us known to one another and to ourselves,” a faith in the possibility of connection. And to a poet, more than the meanings of words matters in making connections with language. Vowel sounds matter, line lengths matter, enjambment or its absence, internal rhymes rather than an end-of-line rhyme scheme. There is so much here, so many levels, that the table at the rich ongoing feast is fuller every time one looks. Thus does art work miracles.

As I’ve already said, this is not a book to hurry through (no book of real poems is), and I salute not only poet Thomas Lynch but also Boston publisher David R. Godine. Thank you both so much! 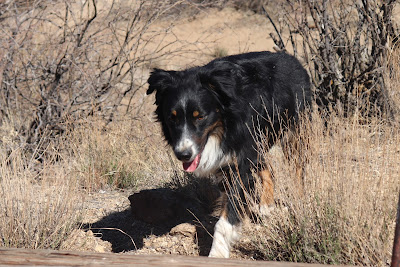 I’m not sure what to report about my rescue dog. “You’re a better dog every day,” the Artist tells little Peasy in all seriousness, and it’s true that my sweet Pea is much calmer and quieter in the mornings now (usually) ... and that we are able to take him with us in the car or leave him alone for hours at a time, as weather and inclination dictate ... and that the three of us adore our evening “pack time” cuddling and snuggling. Such a good dog in so many ways! But you know how some people will say, “I’m a people person”? Well, Peasy is not a people dog. He is in love with me and looks up to the Artist and is happy being part of a family and having a home but still very fearful and skittish of other humans. Not a take-anywhere dog like Sarah. So (words of my mother that I dreaded above all others), we’ll see.

Sometimes, if we have an early supper and don’t immediately sink into our reading chairs with current books, the Artist and I like to drive a few miles to the east and take quiet leave of another day with the long, open views down across the buttes of the Sulphur Springs Valley to the the Chiricahua Mountains and Cochise Stronghood in the Dragoons, driving back to the ghost town after sunset. I’ll let images tell the rest of the story and wish you a pleasant, restful, and safe spring break, however you will be spending it. 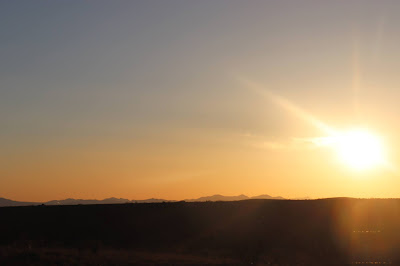 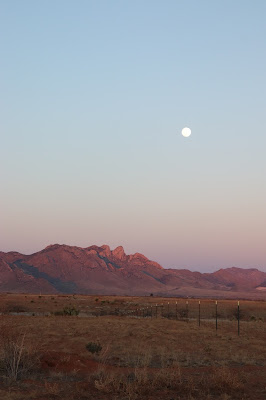 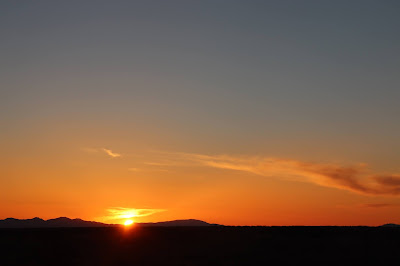 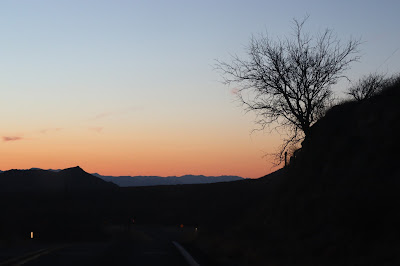 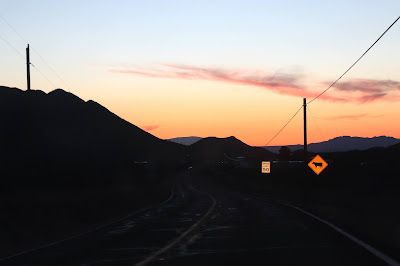 I love those sunsets out there, kind of like when we're at the lake we often take the boat out to the 'big water' where we can see the horizon and wait for the sunset, then put-put home enjoying the warm summer evening on the water.

As for your Sweet Pea, I know that a fearful dog needs lots of time and work and reassurance, wherever he ends up.

He's coming along in many ways, but the shyness persists....