“Life Was Simpler Then.” Was It? 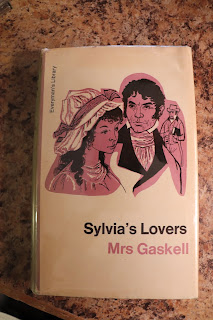 A book with a title like Sylvia’s Lovers, especially when the author’s name is given as “Mrs. Gaskell,” no first name whatsoever, seems to promise escape from our contemporary social strife, and all the more so as the story is set in another country, England, and well over 200 years ago. The setting is a small village called Monkshaven and the nearby northeastern shoreline. The local economy at that time was solidly based on whaling, though farming also went on in a small way, and naturally there was buying and selling. The River Dee divided the little town in have-littles and have-mores, the latter having made their fortunes in the whaling trade, while remnants of hereditary aristocrats kept aloof in their estates on the “wild bleak moors” outside town and inland from the sea cliffs. The novel opens just after the close of “the American war,” that is to say, our own successful Revolution.

But times are seldom simple to those in the midst of them, and the end of the eighteen century was no exception. England was still at war, this time with France, and troubled with a shortage of manpower for its navy. Where were men to be found to sail and fight? The military solution was press-gangs.

The sea-coast was divided into districts, under the charge of a captain in the navy, who again delegated subdistricts to lieutenants; and in this manner all homeward-bound vessels were watched and waited for, all ports were under supervision; and in a day, if need were, a large number of men could be added to the forces of his Majesty’s navy. … Men were kidnapped, literally disappeared and nothing was heard of them again. The street of a busy town was not safe from such press-gang captures…. Nor yet were lonely inland dwellers more secure; many a rustic went to a statute fair or “mop” [hiring fair], and never came home to tell of his hiring; many a stout young farmer vanished from his place by the hearth of his father, and was no more heard of by mother or lover; so great was the press for men to serve in the navy during the early years of the war with France, and after every great naval victory of that war.

While a strong young farmer might be grabbed by the navy and pressed into service, however, it will be quickly understood that experienced sailors taken from returning whaling vessels were the more highly sought catch. And so these ships, having been off to Greenland waters for all half the year, were particularly vulnerable as they returned home “laden with rich cargo,” for the press gangs awaited them “within a day’s distance of land” as they neared the end of their journey. The Americans got off easy, it looks like, compared to the way the English treated their own people!

Press gangs are introduced early into the story of Sylvia’s Lovers, shortly after we have learned that Monkshaven’s economy is based on whaling, and the first dramatic sequence related, though taking place “offstage,” tells of a returning whaler boarded by a press gang … the resistance of the sailors to being taken … the bravery of one young local man and violent death of another … and by the time of Darley’s funeral we have met all the principals of the story and gotten a good idea of local sentiment concerning government seizure of their men. Generally law-abiding and conservative as they are, yet the locals must live, and they live primarily by whaling and — surprise! — smuggling.

And then there was politics….

Politics in those days were tickle subjects to meddle with, even in the most private company. The nation was in a state of terror against France, and against any at home who might be supposed to sympathized with the enormities she had just been committing. The oppressive act against seditious meetings had been passed the year before…. Even the law authorities forgot to be impartial, but either their alarms or their interests made too many of them vehement partisans instead of calm arbiters, and thus destroyed the popular confidence in what should have been considered the supreme tribunal of justice.

Opinions on the war and on government policies and how justice was or was not served ran high. Thus while conversation might occasionally touch on topics of history of government, all involved "took care to be very sure of their listeners before such arguments touched on anything of the present day" and more often confined themselves to how many Frenchmen a single Englishman could “lick” or what name should be given to the royal baby soon expected.

On the matter of impressment, York’s fiercely independent residents were not bothered for a while after Darley’s death, but eventually the navy’s need, plus a desire for vengeance after humiliating treatment of a press gang by local merchant sailors, resulted in an inescapable cordon being drawn tight around the town of North Shields, where two hundred and fifty men were taken forcibly into the navy. The results reached as far as Monkshaven, such that when the whalers returned in autumn there was none of the usual festive gaiety and spending. Instead a mood of “gloomy anxiety” filled the town.

The shops were almost deserted; there was no unnecessary expenditure by the men; they dared not venture out to buy lavish presents for the wife or sweetheart or little children.


… Indeed, all along the coast of Yorkshire, it seemed as if a blight hung over the land and the people. Men dodged about their daily business with hatred and suspicion in their eyes….

Such is the situation halfway through the novel. I should also mention that by this point one of Sylvia’s “lovers,” a sailor on a whaling ship, has been taken by a press gang but is thought by all but the single man who knows better to have been drowned, that man being her other “lover,” a shopkeeper who has worked his way into a position of prosperity but who can neither win the heart of Sylvia nor see the more eager, willing heart right by his side in the shop. The plot is thick, with individual, social, and political conflict where I had to set it aside this morning.

An 18th-century Unitarian, Elizabeth Gaskell herself — because yes, she did have a first name — is interesting enough that you may want to read more about her.
And I should also give a plug for Everyman’s Library, a series similar to Modern Library. On the back of the dust jacket of my copy of Sylvia’s Lovers is this 1928 rave from Raymond Mortimer of the Sunday Times:

A cosmic convulsion might utterly destroy all the other printed works in the world, and still if a complete set of Everyman’s Library floated upon the waters enough would be preserved to carry on the unbroken tradition of literature.

There’s a reason modern classics are called classics and are always worth reading, no matter how many years go by. 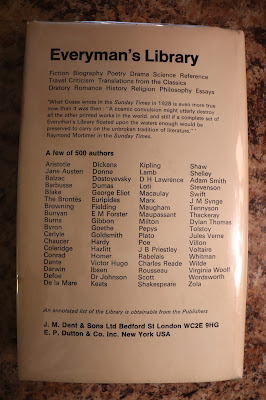