Death, donkeys, and books, that is. Let me explain.

We can probably agree that life is a mystery, and love is strange, but nothing is stranger or more mysterious than death, and not that every death feels the same, for each brings its own universe to bear upon the bereaved. When one’s mother dies, whatever her age, a watershed comes to divide life into before and after. And, as I’ve noticed with other people in their days of mourning, the most trivial and contingent encounters can become magnified into significance within the aura of death.

My mother would have been 96 years old in October. She was still living in her own home, doing her own laundry and fixing her own meals, very active socially and in her church (overlapping domains, those), enjoying meals out with friends, spending time with family, reading books and newspapers, working crossword puzzles, and caring for her two companion cats. We (daughters and sons-in-law) worried about her going up and down basement stairs to do laundry and tried to persuade her to think of selling the old family home and moving to an apartment, but she “wasn’t ready,” she said. And so one day her youngest daughter took her to the doctor (she was fine) and downtown to pay her property taxes, and later that day she talked to her middle daughter on the phone. I would have been calling or sending her a postcard from Lake Huron or both the next day but instead got a message that she had fallen asleep in her chair and not awakened.

A good, long life. A good, peaceful death. And yet, now, for her daughters, nothing will ever be the same again.

The Artist and I had looked forward to a little getaway after our work-filled summer, so we were over in Alpena, after an overnight in East Tawas and breakfast with friends, when the news came to us. We had crossed the state west to east on Tuesday, recrossed it from east to west on Wednesday, and covered most of the lower peninsula from north to south on Thursday. I took with me the book I’d taken to Lake Huron, A Manual for Cleaning Women, by Lucia Berlin. In every story that mentioned death, that event jumped out at me, but Berlin’s writing, so moving, affected me deeply on every page. Yet the sentence that engraved itself in my heart, because of the time of my reading, was a tearful exclamation from the author’s sister, dying of cancer, which Berlin made part of one story: “I’ll never see donkeys again!” 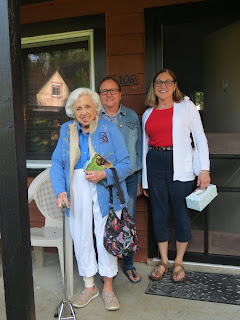 My mother will never see Michigan again. I’ll never see my mother at Sunrise Landing again. Donkeys…. Yes, I can easily imagine shedding tears at the thought of never seeing donkeys again, although in my case it would probably be horses. My mother, though — I don’t think she had time for a thought of anything she might never see again, dying peacefully in her sleep as she did.

My husband and I were staying in my mother’s house, the house she occupied for 68 years (I lived there for almost 16 myself), when I came to the end of Lucia Berlin’s book, and I needed something else for those dark but wide-awake 3 a.m. hours. My next choice might seem a strange one — a murder mystery, Critical Mass, by Sara Paretsky -- but circumstances made it a logical choice. Not only are Paretsky’s novels are all set in the Chicago area (my mother lived 45 miles SW of the city), but my mother and one sister and I (the other had a scheduling conflict) had gone to see and hear Sarah Paretsky in person onstage in Traverse City where she appeared as part of the National Writers Series in the fall of 2013.
This particular volume was also a copy signed by the author and with one of my mother’s address labels on the front-facing endpaper. So whenever I picked up the book, and as I turned the pages, I was reading a book my mother had held and read, written by an author we had gone together to hear speak, and when Paretsky described farms, cornfields, and small towns south of Chicago in the novel, the terrain described (minus murdered bodies) evoked memories of my Illinois girlhood, 4-H and all, and all of us were connected by the physical book as well as the story it told.

Years ago, someone I knew only slightly wrote a quasi-philosophical paper around the time of her father’s death, and I was perplexed by some of the books she mentioned in the paper, books that spoke to her at that time in tones of deep significance but that seemed to me tangential at best to her theme. I understand her state of mind better now. In such circumstances, everything is highlighted, foregrounded, important — but by “everything,” I don’t mean contemporary world events as much as the weather, the season, chance encounters and random remarks.

Both of these books are well worth reading, whether or not you pick them up in a state of grief. For me, though, they will always have added depth, due to the associations that will always cling to them for me. 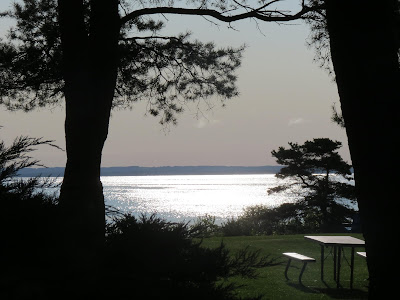 Warm remembrances. Your mom had a death, many envy. Be grateful for that. And she left behind much more than a hole in your heart. As years pass, you’ll discover what made the woman so dear AND sometimes so annoying. Your love and respect for her will deepen.

Today would have been my mother's 89th birthday. Like your mom, she resisted giving up her little freedoms, but my mom was not healthy in her last years. She died in a resthome, only 3 hours from me moving her to her home to die. Miss her still. Thought of her all the time I was in Ukraine. I know that she enjoyed the trip as much as I did, cause she and dad are with me everyday.

On another note. Sam and I volunteered with Sara Paretsky in California. She was a kick. Thank you for reminding me.

No words can really help. So I send virtual hugs.