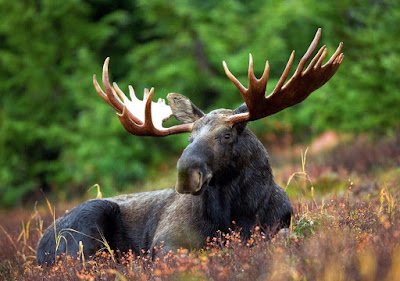 Can those of you who live in or know Leelanau Township imagine it with a moose population of 1500? Where would they all sleep? Okay, that’s just being silly, but the overpopulation problem is real, as the wolf population on the island is now reduced to two, and those two — mother and son are also sister and brother — cannot reproduce. Elderly besides, they are unable, without help from other wolves (presently unavailable), to take down moose and survive instead on a diet of small mammals and the occasional moose that dies of natural causes. 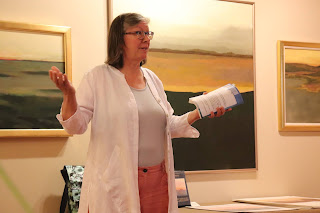 My TEA guest this week (that's Thursday Evening Authors, the literary series celebrating my bookstore's 25th anniversary), author Loreen Niewenhuis, told us that one devastating cause of wolf die-off was canine parvovirus. A domestic dog infected with the virus was brought to the island, and the infection spread through the two then-resident wolf packs, killing large numbers of animals. Another problem was inbreeding. In colder years, and with fewer humans living on the Lake Superior shore, wolves could cross back and forth from the island to the mainland. Illness, inbreeding, climate change -- all have contributed to killing off wolves on Isle Royale.

Poor wolves, you may be thinking, but the moose have problems of their own. Think of overcrowded human cities and endemic poverty. Also, moose cows commonly produce twins. Without predation by a healthy wolf pack, the moose population is on the rise. (If you missed Loreen Dog Ears Books’ TEA this week, you can read a bit about the problem here.) Moose love balsam fir. The trees don’t get very tall, as the moose browse their tops. What would happen if too many moose “deforested” the island?

Since I’ve been reading Collapse: How Societies Decide To Fail or Succeed, by Jared Diamond (and I wonder if the title was chosen or guided by the publisher, because it hardly seems the Easter Islanders made a conscious decision to starve) and can’t help seeing parallels between human populations and societies and those of our animal relatives. With those thoughts in mind, this morning I was not only haunted by problems of human civilization but also haunted by moose. Maybe I am just haunted in general by the challenges of life on this beautiful, tough, fragile, dearly beloved green and blue planet of ours.

Loreen Niewenhuis has spent the month of May on Isle Royale for four years and will go again in 2019 as part of a 61-year study, the “longest continuous study of any predator-prey system in the world.” The current plan is to introduce new wolves onto the island, in hopes of bringing the wolf-moose system back into some kind of “balance,” although Loreen says that one thing the Isle Royale study shows very clearly is that the idea of “balance” in nature is more fiction than fact.

I don't know how to wrap up or conclude this post, either. I'm sure the haunting will continue for a long time, maybe for the rest of my life, though I will probably haunt the moose and wolves only in the pages of books and leave the big adventures to people like Loreen. 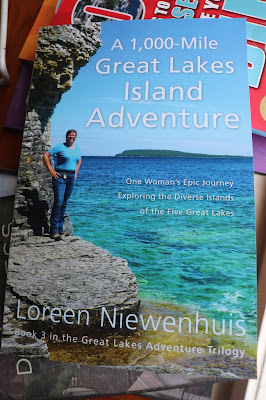 What an interesting, and sad, problem to study. And what a perfect place to study it. Glad she's able to go and bring back the information, and the sense of adventure, to all of us.