Stops and Thoughts Along Life's Roads 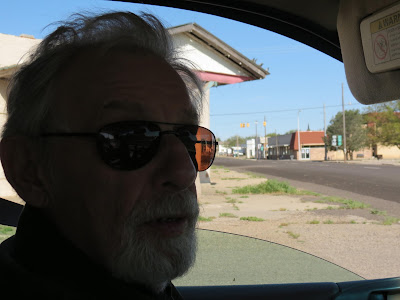 When our pack is on the road, obviously we don’t stop in every single little town along the way. That would be impossible even when if we always eschewed interstate routes and took nothing but two-lane highways, because what if there were a little town every 20 or 30 miles? It would take forever to travel just from Northport to Grand Rapids! But you know I am a big fan of both two-lane roads and small towns, and we’ve seen quite a few of them in the past several days. 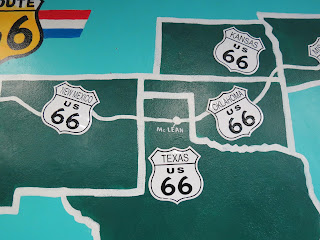 From Arizona to Missouri (and beyond, but we’re only as far as Missouri at present), many towns bypassed by interstate highways and left to die on the vine beat the drum for old Route 66. After all, if they were on that old road, they’ve at least got that to spin, though it won’t bring enough business to revitalize all the boarded-up restaurants and abandoned, derelict motels once so lively with families on the move. Because the interstate wasn’t the only element of “progress” working against the little towns. Cars became faster and covered more miles a day. Motor homes became popular. When one era segues into another, changes don’t occur singly. Instead, each one brings on others, resulting in a landslide effect. 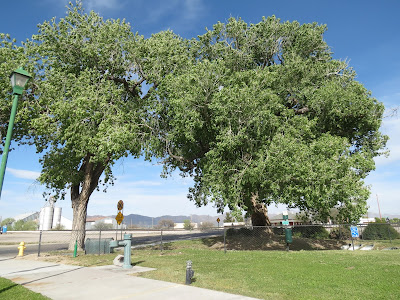 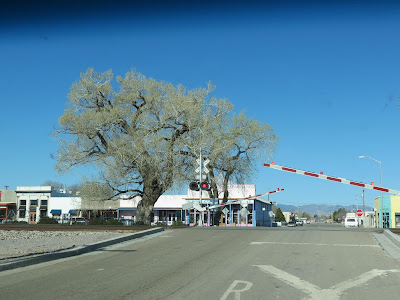 Willcox, Arizona, was passed by when I-10 came along, and the passenger train that roars through doesn't stop at Willcox any more, either. Most people never see more of Willcox than the gas stations and fast food joints at the interstate exchange. One of my friends from Tucson said that’s all she had ever seen, and I told her she must take Rex Allen Drive, old Hwy 186, to the “old town” across from Railway Park. There are four wineries with tasting rooms within walking distance of the park. There is a movie theatre. There are new shops this year that weren’t there three years ago. The Rex Allen Museum is worth a visit even if you’re not a fan of Western movies and draw a blank when someone says the name “Rex Allen” to you. And anyway (my ace), Willcox is, after all, the gateway to the Chiricahua National Monument! So slow down, stop, stay a while!

Then there is Santa Rosa, New Mexico. I’ve written about Santa Rosa before, too, so I won’t repeat everything I’ve written before. You can follow the link to read my take on Santa Rosa and/or go to the town’s website to see what they find noteworthy about themselves. 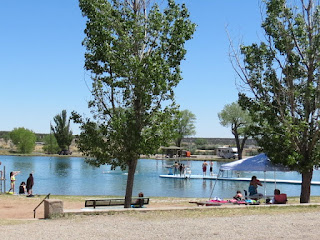 While I don’t want to repeat myself too much, however, I have to say again (now that I’ve brought it up) how utterly charming I find Santa Rosa, and I’m pleased to report that this time around, to my great satisfaction, the Artist felt the magic, too. We drove around town, as we have developed the habit of doing (this is our third or fourth visit), admiring stone walls and adobe brick homes -- driving by one of my favorite little houses again, too -- and speculating on that. I commented that Santa Rosa, though obviously struggling economically, has all kinds of potential and a lot of already actualized lovely features. Besides its Route 66 history (which is, after all, hardly unique to Santa Rosa) and beautiful old civic buildings, the little town is naturally blessed with the Pecos River, El Rito Creek, spring-fed Park Lake, and the famous Blue Hole, an artesian well popular with serious divers and fun-loving families alike. 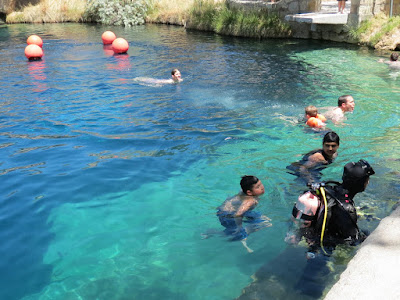 On this particular trip, we came through Santa Rosa on a warm, sunny day and found both Park Lake and the Blue Hole swarming with happy people. Both places were such a pleasant scenes, it was hard to tear ourselves away, and we have still never made it north of town to the Santa Rosa State Park, where the really big lake is. If we hadn’t been making our way east in a window of clear weather, following tornadoes the week before, the Artist said he would have liked to stay and spend a couple of days in Santa Rosa. “We’ll have to come back,” we said to each other. The next time I’ll have a bathing suit with me, for sure! And I hope we're there when the corner cafe on courthouse square will be open, because the old business was closed on our first visit, on our second time through (in January) we were a few days too early for the new Grand Opening, and this time we were there on the wrong day. But Santa Rosa, we shall return! 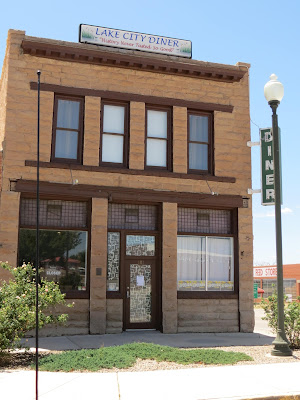 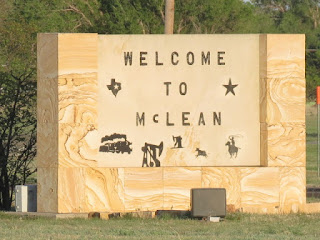 Back on the Big Road (sigh!), we made it all the way to McLean, Texas, by the end of our driving day. When we arrived there were no cars in the parking lot and a sign on the door telling us what phone number to call. "What if they don't take dogs?" I asked, then answered my own question: "They'd be fools to turn us away!" 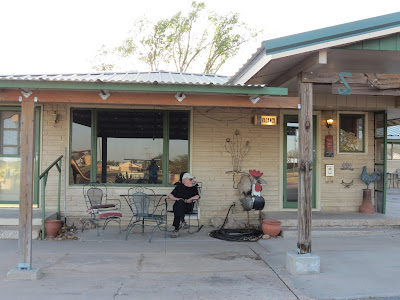 As it turned out, however, we got the last available room! A wedding party had booked the rest and would arrive after the reception. David asked if it would be a raucous evening but was told no, they were a religious family. And indeed, we had a calm, tranquil stay. 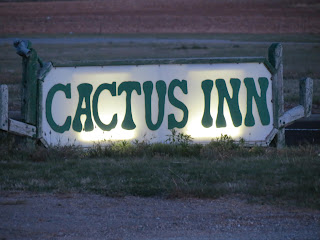 What a sweet little place! The room was huge, towels enormous and soft and thick, and the in-room coffee pot made twelve full cups! We sat outside in the last light of the day and felt perfectly content. “This is perfect,” we agreed. 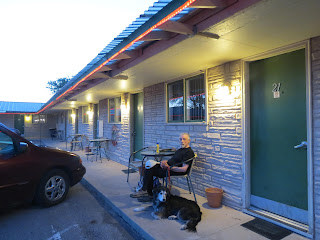 In the morning we made our way downtown for breakfast, and we did find a restaurant open and started our day with a hearty meal. There was also another little combination cafe/store, a regular grocery store, one gas station, and a museum (not open on Sunday morning). 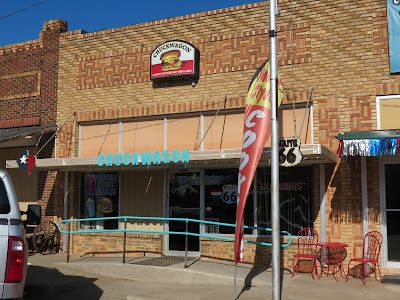 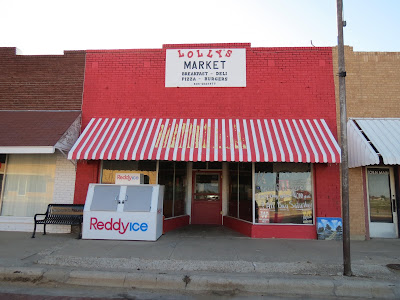 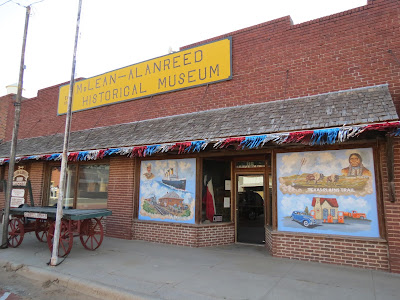 But oh, the empty storefronts! What a heartbreak! I remember Northport’s dark days and how woebegone everyone was, and it was nothing like this! 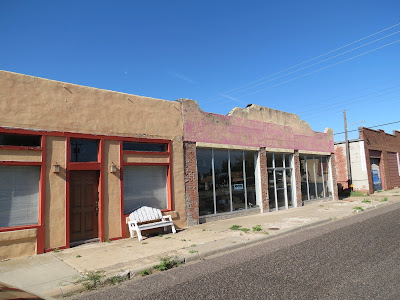 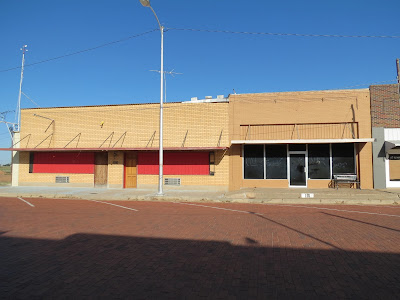 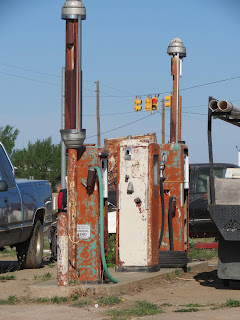 Before leaving, we bought gas in McLean, as we had in Santa Rosa, although we knew it would probably be cheaper at a big interstate exchange, because we wanted to do our part, and as we made our way down the road, we brainstormed ideas for revitalizing small towns across America. We had some good ideas, too. But I wonder. Are we dreaming of a past that will never live again, an America our grandchildren will never know? A place with vibrant small town life from coast to coast and border to border? I have a lot more to say and write on this subject, but now it's morning and time to get back on the road again. 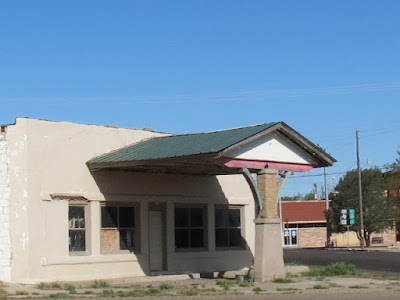