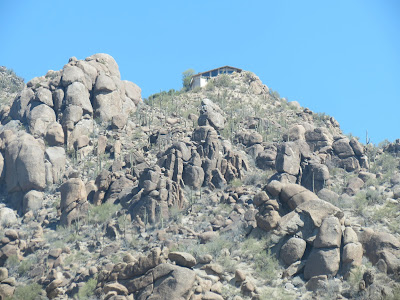 My eyes were wide open from the day's start, when Sarah and I took a walk around Carefree, and I took note of blooming saguaro. Then my friend wanted to take us on a tour of Stagecoach Pass, where the houses are built right into the rocky side of Black Mountain. Holy cow! It’s as if people set about building houses in Cochise County’s Texas Canyon! The architects and builders must really know what they’re doing to do these jobs that look, on the surface, close to impossible. When we said good-bye to my dear friend (our lovely hostess), we left on the Carefree Highway west and then north on expressway in the direction of Flagstaff.

Although on I-17 we found ourselves at elevations of between 4,000 and 5,000 feet above sea level -- a little scary -- we elected to stay on that road rather than leave it for Sedona and Oak Creek Canyon. The latter is a beautiful drive, but we had already enjoyed it three years ago. Also, it’s so popular that there’s almost nowhere to slow down, let alone stop, on the winding two-lane road. And anyway, the views along the faster road were still spectacular, in a different way, in every direction. 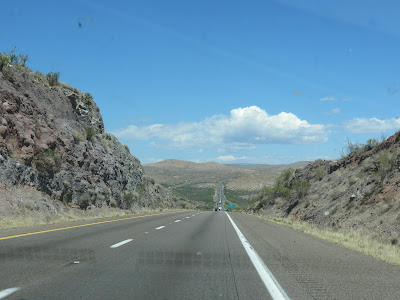 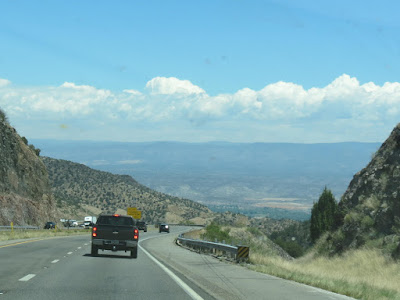 One thing we’d forgotten was snow-covered mountains north of Flagstaff, so when they appeared in front of us, we were as amazed as if we’d never seen them before. 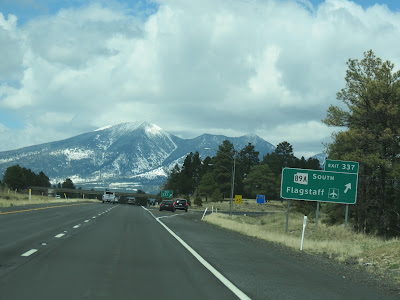 Flagstaff is at over 6,000 feet in elevation, and the San Francisco Peaks to the north top 12,000 feet.We were so mentally exhausted from the drive and the eye-popping views that it didn’t seem at all crazy to stop and get a motel at 2 p.m., and the view from our very reasonably priced motel room, as it turned out, was dramatic, too. 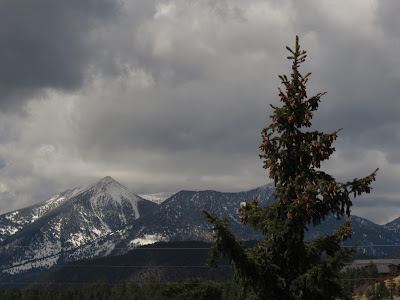 After a little rest break, we set out to explore, because downtown Flagstaff is fascinating, too, with stunning old buildings and lively sidewalks and alleys. 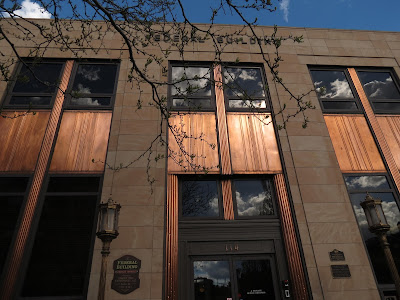 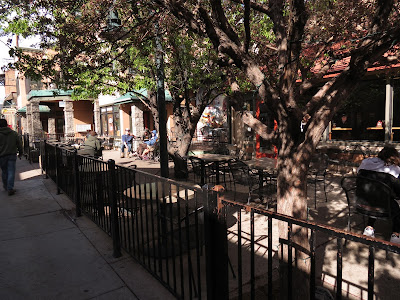 We peeked into galleries, perused restaurant menus posted on windows, and then -- 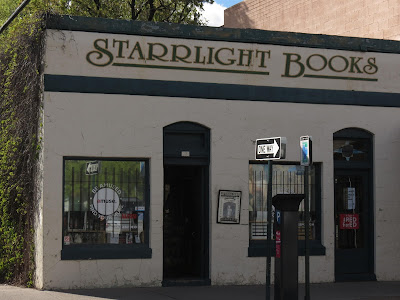 Bingo! Old books! And the door (left) was open!

Proprietor Hugh Fogel, whose business card calls him 'Creative Director,' has owned Starrlight books only since September. (I didn't ask and haven't investigated but wonder if the former owner was named Starr) He has been told that summertime is "the season" in Flagstaff, but now in early May, Flagstaff is like Northport, Michigan, with chilly air wafting through fragrant pines and junipers, a time of anticipation for tourist town small business. Well I know that feeling! 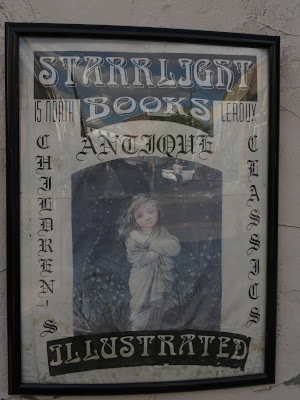 Our book ardor, however, had not been cooled by the weather. The cool, high-altitude air was stimulating -- as I say, it felt like Michigan -- and we were stimulated as well by shelves and shelves of old books, with a few new ones mixed in. I bought half a dozen volumes, and the Artist and I will definitely return to Starrlight whenever we are back in Flagstaff. Which inspires me to inaugurate something I should have done in this blog years ago. Here it is:

Excellent! Someday I hope to visit Flagstaff again. Hope they are still there!

What a great idea - posting locations of bookstores! Love the photos too - wonderful out west, isn't it?

As you know, Deborah, I've been writing about bookstores we visit for years. It just occurred to me (finally) that I should give the addresses, so other people can find them easily.

Dawn, Flagstaff is a great town in so many ways, isn't it? There was at least one other bookstore, over and down a block, but we didn't get back to check it out. You know me and used books!