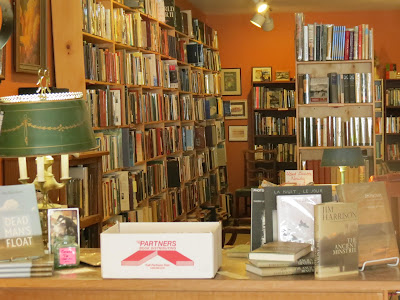 First times are marked in the moment and often memorialized in snapshots. A first haircut, first bicycle, first date, first job, first car. Many are landmarks in life's landscape -- for me, my first garden, Traverse City, 1970; first bookstore, Northport, 1993 (and a score of more personal dates).

It is often only in retrospect that we recognize a last time. The last trip to the U.P. in the old truck. A last trip on a favorite country road, lined the next time with subdivisions, shopping centers, and mini-malls. The last letter from a friend before receiving news of her death or a last evening spent with other old friends, gone too soon.

(When something or someone is a treasured part of one’s life and memories, the last time always comes too soon.)

I began ordering new books from Partners Book Distributing, down in Holt, Michigan, in the late 1990s. Until then, I had bought and sold only used books, but every summer there was heavy demand for nature field guides – more than I could supply with used versions, or maybe I didn’t have the specific guide a customer wanted -- and finally it occurred to me to remedy the situation in the only sensible manner. Partners was the distributor of new books for the Great Lakes region. They were not tiny -- but neither were they a global, engulf-and-devour presence in the world. When you called, real human beings answered the phone. It was always a pleasure. It wasn’t long before I was inspired to order a few children’s books with Michigan themes. Then fiction and poetry and memoirs....

Some people don’t believe in middlemen, but I do. Without book distributors, a bookstore would have to maintain separate accounts for every publisher, large and small, and every self-published author whose books were worth stocking. Say I want to order only one or two copies of a book. Will the publisher extend a discount for a single book? Ha! The sad truth is that without distributors, there are many books a bookstore cannot stock. And books need visibility! Placing an order with a distributor makes it possible for me to order as many or as few of each title as I need, flexibility which is absolutely critical for small operations like mine.

Independent bookstores. Small regional publishers. New authors without name recognition. All of us depend on book distributors, and in the Great Lakes Region (with a second division in the West), Partners was the gold standard.

On March 30, UPS delivered a box to Dog Ears Books from Partners. I opened it eagerly, happily, as if it were a Christmas present, even though I knew what I had ordered. (Opening a box of books is always exciting.) I could not see into the future, close as it was.

Two days later, on Friday, April first, there was a strange message in my e-mail from someone with my larger, national distributor, assuring me that they would try to supply as many as possible of the titles Partners “had carried,” though they would be unable to pick up each and every one. Had? What could that mean? What was going on?

I called Partners and asked for my favorite salesman. “Is this an April fool’s joke?” I asked. Sadly, he told me it was not. That very day was the last day of business for Partners, and the box I had received on Wednesday was the last I would ever have from them.

Stunned, I called a friend with a new small publishing house. He was in shock, too. And we were not alone. A self-published children’s book author who had been thrilled to have Partners agree to carry her book knew nothing of the closing until she heard it from me. Now she’s completely at sea. Regional authors, publishers, and bookstore owners were all blindsided and devastated. None of us knows yet quite how far-reaching will be the effects, but we know they’ll be significant, and we can’t believe they will be good for any of us.

I don’t clear out my inbox as often or as thoroughly as perhaps I should (I am not the world’s most efficient business person -- and too bad about that, but I am what I am), so I looked and found “Ye Olde Partners Page” from March 24. Here’s one line from that page:

Tune in next week for the quixotic conclusion of Great Lakes Alien Lawman!

Only, as it turned out, there was no “next week."

I never imagined that these old friends, these valued partners in my book world, would ride off into the sunset before I did. What will the sales and warehouse staff do now? And what will the rest of us do without them? 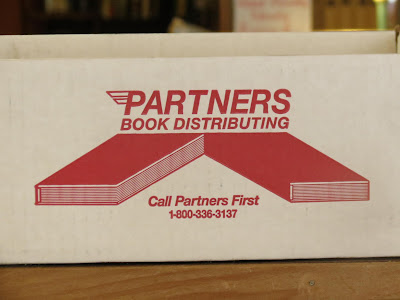