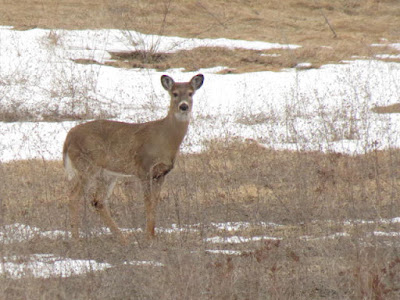 I'll ask you to picture most of today's post in your mind, as I have no decent photographs of my coyote encounters and went out walking without my camera on Sunday morning.

Coyotes are common in our area, though they were less so in the past of living memory. Deer are more common, too, than they used to be. If it seems a paradox – wildlife increasing along with suburban-type spread – think of all the new lawns and gardens carved out of former forest as a never-empty buffet table spread for wild deer. Is it any wonder they approach the houses? And with the deer come their predators.

In general, of course, there is more wildlife around us than we ever see. Few people in Michigan have ever seen a vole, and yet it is the most common mammal (woodland and meadow) in the state. I have only seen two – and neither for more than half a minute, if that. Fuller and rounder in body than a field mouse, with a pudgy little face, the vole is as shy as a Borrower. Caught out in the open, seen, he is seized by panic and cannot disappear fast enough. Yet when we go walking in the country we are strolling over countless vole highways.

The presence of larger mammals such deer and coyotes, is more obvious. It’s a rare walk along a dirt road that fails to turn up deer tracks or coyote scat. Deep, sharply outlined hoofprints with sand and dust thrown up tell you that deer ran across the road very recently. How many were there? Were they being pursued, or did they scent your approach? That greyish coyote scat is old, not from this morning. Later in the summer fresh scat will usually contain (and it’s surprising when you see this for the first time) cherry pits, but fresh cherries are a long way off in mid-March. This is scanty scat. Was it a young coyote or only a very hungry one?

Along a line of giant old pines, trees collaborating with the wind off the lake to produce a symphony, nature’s power their theme, on the ground between the pines and first row of cherry trees lies half a deer leg. Bent delicately at what would be called the ankle if this were a human leg, the hoof is a healthy black, fur still intact, while above the joint the bone is almost completely exposed. Only a few shreds of red meat remain. And yet, though the remainder of the carcass is nowhere in sight, this tattered, bloody remnant manages to project the spirit of the living deer. Before death came life.

These are the signs. This is the drama of prey and predator, of nature red in tooth and claw but, for all that running and killing, animals only doing what they must to survive. Hatred has no part of this drama, which is not a question of war or demonization. And so, even a scene of carnage carries a sense of peace. Somewhere nearby are pups with warm, fat, full bellies, and soon there will be new fawns born.

At night the coyote chorus seems gathered beneath the bedroom window to serenade us. They sound closer than they are, but in the early morning, from an east-facing window, it is not uncommon to see a lone coyote making its way back through the orchard from the creek, returning to a den along the edge of the woods. A den, like tracks and scat, can be read as active or abandoned, according to the freshness around the opening, although giving any den a wide berth is never a mistake. One animal might have dug it last year and another taken it over for winter quarters.

Human beings rarely surprise wild animals attuned by necessity to everything going on around them, but once a coyote and I surprised each other. It was on an old cleared lane through the woods, a lane that descended into old woods from higher cleared ground, tilled fields, and my dog was still behind me, up on that open, higher ground. Since on our walks together she never allows herself to be left behind, I went alone down into the woods, confident that she would follow in her own good time. And there coming toward me in that wide, open, clear green swathe cut through the woods, expecting me as little as I had expected him, trotted a confident young coyote. We both stopped and faced each other silently, watchfully, unmoving, across the distance separating us. Then, as if by mutual consent, each of us turned back to go the way we had come.  Regaining the high ground, I went another way with my dog that day. Where the coyote went or what he did was his business.

I have seen other coyotes, and one other time the animal stared at me. It was on a hill just past our barn, in winter. Sarah was a puppy, new to our household, and for some reason I had taken her out on a leash that morning. She was fascinated by the coyote that looked through us with its blank, wild stare, standing its ground. I waved my arms and yelled at it to leave but had to take a few running steps to goad the animal into a gentle, reluctant, loping retreat, frequently interrupted by halts and backward glances.

Sarah was young then, and we had conversations with friends and veterinarians about dog vs. wild encounters. “Wild always wins” was the chilling verdict from one vet. Now, as then, I prefer the words of cowboy poet Max Black’s “Ode to a Border Collie,” which states that the border collie “makes coyotes tremble.” Sarah is a mix of border collie and Australian shepherd, and she’s grown into a big girl.

Not that I wish the coyotes bad luck with their hunting. I just don’t want them messin’ with us, and so far they have not. Peaceful coexistence is close enough. 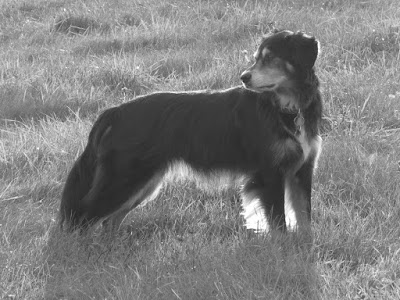 Such a beauty that Sarah girl. I can just see her staring coolly at a coyote.

Early one morning back in January Miss Sadie, the Cowboy and I were on the bluff above the beach when a canid of some sort trotted across the snow volcanoes. It was very large, with a bushy tail and a very healthy coat. It noticed us and paused. We noticed it and froze. It gave us that cool look. We were all very quiet. It turned and trotted on about its business. We went home in a meditative mood. I had it in mind to go back down alone to take photos of the tracks, but thought better of it. I have no idea if it was a coyote or a large dog or . . . it couldn't have been a wolf. But my alarm system did not know that.

Our northern Michigan coyotes are so big and healthy that many visitors will not believe they are not wolves. The first time I saw a pair, I couldn't believe they weren't wolves, either. Fascinating, aren't they?

Deer and coyote seem to adapt to the human and our infrastructure better than most wild animals. Just driving into town in the wee
morning hours, I will see one or the other several times a year.
The Native American culture, with their keen eye for and understanding of nature, reserve a special place for the Raven and
Coyote, probably based on their seeming cleverness. Most tribes from
the Midwest to the west include 'Coyote' in their myths. Here the
Nez Perce give him a critical role in creation and the art of
getting along. Some years back, the neighbor boy brought back a
litter of coyote pups wrapped in a blanket. Like most canines they
were really cute furry bright eyed innocent babies. The father was
of course horrified and the pups returned to their den where hopefully they grew up and pestered the ground squirrels...and I wonder if one of that progeny may have run across the road, like
his kin I often see.

BB, I wonder if it's better than other large mammals. The voles and mice and squirrels seem to like living near us just fine, too.