Dark Days but “Nothing Darker...” 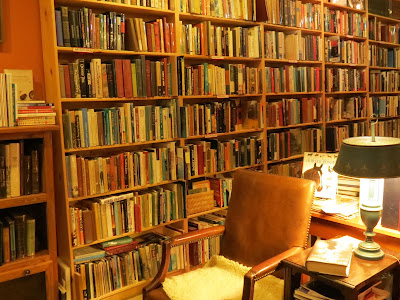 “There is nothing darker than a dark screen.”
-      Gary Frost, book conservator

Winter is a dark time in the northern hemisphere. Monday morning’s sunrise did not break through heavy clouds along the horizon until 9:15 a.m., and not for long did the sun’s visible presence cheer the frozen landscape. All day falling snow shifted direction constantly in the wind and formed deep drifts on the ground.

Dark winter days and nights, thanks to electric lights (or, in an emergency, candles and kerosene lamps), are good for reading, of course, and I’ll be the first to admit that winter reading for me is often escapism. In the pages of a book I am no longer in cold northern Michigan but in sunny California or sunny Provence or even wintry medieval China – since winters of another time and place don’t chill me as does the one outside my door. And then, unreconstructed bibliophile that I shall remain as long as I draw breath, I take from the shelf Julia Miller’s Books Will Speak Plain: A Handbook for Identifying and Describing Historical Bindings (I have written about this book before -- see this post, if interested) and among the wealth of scholarly and practical detail in those pages I also find the author’s firmly stated opinions on the value of physical books. It was from a much longer quotation in Julia Miller’s book that I took today’s opening epigram.

(And yes, I am well aware of the irony of posting what follows online to be read by viewers of screens, but this is the public forum available to me, an unknown bookseller in a small northern Michigan village.)

Darkness and books together bring to mind what we were taught in my young school days to call “the Dark Ages,” those long centuries of war and plague that stretched, in my old high school lessons, from the Fall of the Roman Empire to the dawn of the Renaissance. We know that books and learning did not disappear entirely during the period, that literacy and even creativity were preserved and even flourished in the libraries of monasteries throughout Europe.

But do you imagine early Holy Land texts only as scrolls? Newer works produced in medieval monasteries only in manuscript form? Dr. Miller makes the case that what we consider a codex, “sheets of papyrus or parchment [that] carried information on both sides and [that] were attached together through some means,” probably dates as far back as the second century of the Common Era. Not a single example of a second-century codex has been found with an intact covering, but Miller speculates that what we today call a book’s binding might well have been separated from an ancient text when it was discovered and that ancient bindings, not recognized as such and/or not considered important by archaeologists, may yet exist in museum collections -- warehoused, forgotten, and far from the text they once protected. So the book as we know it may be older than we generally think.

Miller cites the work of John Sharpe, who saw the nascent codex form in crudely made papyrus notebooks and multi-leaved wooden tablets from the first century. Second-century poets did not consider codices to be, strictly speaking, “books” (one wonders what would they make of e-books!), but the format clearly existed, both in single-quire and multi-quire form. After all, Miller writes,

Perhaps scribes simply realized that the bound page format was easier to use, could carry more text by being written on both sides, was easier to store, and could be more easily referenced.

It is much later in her own book that Miller makes a plea for preservation not only of physical texts but also for conservation of physical bindings. Part of her plea for books is a cry of alarm:

The preservation of our past, present, and future intellectual heritage has become a pressing problem to the intellectual property managers of public and private information collections. The gap between generating the written record and finding the means of maintaining and preserving it adequately has been a problem throughout the history of the physical artifact record. A new problem arises with a new way of storing information: more and more of the content of once-traditional libraries and archives is moving onto electronic storage systems.

It is in this context and this chapter, on the following page of Books Will Speak Plain, that Miller quotes Frost at length, italicizing one of his sentences in the first of three paragraphs from ‘Medieval Bookbinding”:

Only passing nostalgia for the book is typically considered, without serious thought given for any attributes of print that cannot be supplanted by on-line reading.

Impossible that the only value people see in a physical book is nostalgia for a quaint, outmoded object. Isn't it?

As much worse-than-usual winter business darkness falls on my oh-so-modest bookshop in northern Michigan, such that I cannot tell if it is experiencing a brief eclipse or entering irreversible last days, my personal devotion to the printed and bound word remains steady. Not that I offer my clientele fragments of ancient parchment or illuminated medieval manuscripts. While most of my inventory is ordinary, however, I do have a small selection of more special items – signed modern firsts, beautifully bound classics, 19th-century survivals, some rare and curious titles – but I see the value in my collection more in its existence than in its present bottom-line market value.

For example, on my own shelves at home is a volume containing John Locke’s Two Treatises on Government. If I were unable to get to a library, if the digital world were to go dark, or if some future despot were to decide Locke’s ideas too dangerous to be accessible to the public, as long as my body and spirit are united in this world I like to think I can open my book – something as much my possession as the shoes I wear -- and read the words Locke wrote in the 17th century (first published in 1690), words that helped to shape our own nation almost a hundred years later.

Not long ago I was offered several boxes of books by a couple who explained that they were “going digital.” I have more than one friend who stores “books” in a remote “cloud.” A law librarian tells me that more and more information is unavailable to students and practitioners in print form, and he worries that much is being be lost. Failure to update online information is another deep problem for any knowledge quest.

I see the value of having a backup system, but digital storage is not backup if it is one’s only system, not itself backed up with a medium like that used by so-called “dark” medieval culture – to quote Gary Frost again,

a medium that [is] eye readable, interfaced by the reader alone, and physically accessed by direct manipulation.

Not all books need to be preserved forever. That I’m sure we all recognize. But can we truly and securely possess any book without owning its physical presence? In Locke’s Second Treatise he discusses money as something unlike venison or acorns, something can be “kept without spoiling.” The same is true of physical books, given adequate care, as is shown by the survival of so many of them through the centuries.

Dr. Miller’s area of scholarly expertise is historical bindings, and much of her plea for conservation has to do with the outward covering -- the clothing, if you will – of books, but she clearly recognizes the value of content, as well, and its increasingly precarious position in today’s world:

At the same time that collections managers are balancing many responsibilities to their patrons and their collections, they also have to contend with the inherent vulnerability of the digital record. The Internet as the global storehouse for intellectual property has a very big problem, and that is that access to it can be ended at the whim of a terrorist or a dictator or a natural disaster. We all fear a system containing our intellectual heritage that may in future be able to be altered or information removed, where access can be denied for political reasons. We know it has happened in the past with the hand-written and printed record, and there is no reason to suppose the cyber-intellectual record will be any more secure from manipulation; it may be more vulnerable. [My emphases added]

And so I continue to believe in the value of my chosen way of life and in the physical book. More than that, I believe that every bookstore in the world and every library of physical books, whether public or private, has inestimable value not only for the present but for the unforeseeable future.

While Europe descended into centuries of chaos, many books survived and even multiplied. In 21st-century Michigan, when the power goes out and batteries go dead, physical books can be read at night by lamp or candle, in daytime by daylight alone. In the search for energy independence, it is important to remember devices and inventions whose use requires no fossil fuels, no batteries, no power grid.

Let me close by repeating today's opening quote, in hopes it will be seared into a few brains:

“There is nothing darker than a dark screen.”
-      Gary Frost, book conservator