Gliding From One to the Next

If David and I had university positions, teaching art and philosophy, we would surely have earned sabbatical by now, the academic world’s recognition of the fact that those engaged in teaching need occasional time away for their own research and creative projects. Working in retail as we do, i.e., selling books and paintings, can be as intense as teaching (we’ve both taught, so we do know both worlds); this winter, therefore, David and I are giving ourselves sabbatical. Our businesses will be closed from the first of January to the end of April. We’ll be recharging our spirits and focusing on our own work, coming back in the spring energized and with renewed enthusiasm for our Northport world.

The other day, after David gave me a little pep talk (something I needed during a slow holiday shopping season), reminding me of all the loyal Dog Ears Books customers who turn out for my author events and buy books when they come, I looked back at the roster for the past year. Our bookstore events really were remarkably successful – and a lot of fun!

The event year began early in the season, in May 2014, with photographer Ken Scott and the best-selling book of the year – I’m sure this was true throughout the county, as well as in Northport – The Ice Caves of Leelanau. Wow! The 100 copies in my first order were all promised before Ken’s appearance date! Then the printer was late with the books, and half my customers (I love ‘em!) sweetly offered to wait a week for theirs! The ice caves themselves had been the phenomenon of the preceding winter; the book was a phenomenon that came on in spring and kept going strong through December.

The next month, June, was almost more excitement than this bookseller could absorb. Thirteen (yes, 13) poets came to Northport from all over the state of Michigan to read their work from the beautiful new book, Poetry in Michigan, Michigan in Poetry. Poets in attendance were Angela Williams, Mary Ann Samyn, Joy Gaines-Friedler, David James, Dennis Hinrichsen, Patricia Clark, Linda Nemec-Foster, Keith Taylor, Anne-Marie Oomen, Alison Swan, D.R. James, Teresa Scollon, and Bill Olsen. (Audience in attendance was so numerous that the crowd spilled out into the artist David Grath’s studio and out onto the sidewalk.) Samyn, Oomen, and Scollon had previously read work at Dog Ears Books, but the rest were here for the first time; Olsen is one of the two editors of the collection. Along with celebrating poetry in Michigan, we were also celebrating (unbelievably, to me) the 21st anniversary of my bookstore, first opened down the street in 1993. What an evening! I saw stars for weeks afterward....

In July I took a breather from bookstore events but let myself get strong-armed into doing a 5-minute reading on live radio, when the “Roundup Radio Show” came to the Northport Community Arts Center auditorium. Bill Dunjen’s invitation was completely spur-of-the-moment, and my first impulse was to decline, but I rallied, found a passage from Ellen Airgood’s South of Superior, did a few quick run-throughs, and the little gig went very well. People I never see in my bookstore were stopping me at the post office and in the grocery store days later to congratulate me on that one brief performance. Visibility. Presence. Taking the bull by the horns. An indie bookseller can’t let a chance like that get away. I was also happy to promote Ellen’s book, which I love, love, love! (I’ve read it four times.)

Another literary item on my July calendar was a gathering of fiction-writing friends, all women, who came to my old farmhouse for an al fresco luncheon that stretched to dinnertime. Each writer read from current work-in-progress and reported on publishing status – which sounds (and is) quite serious, but we also drank several bottles of wine and laughed a whole lot. 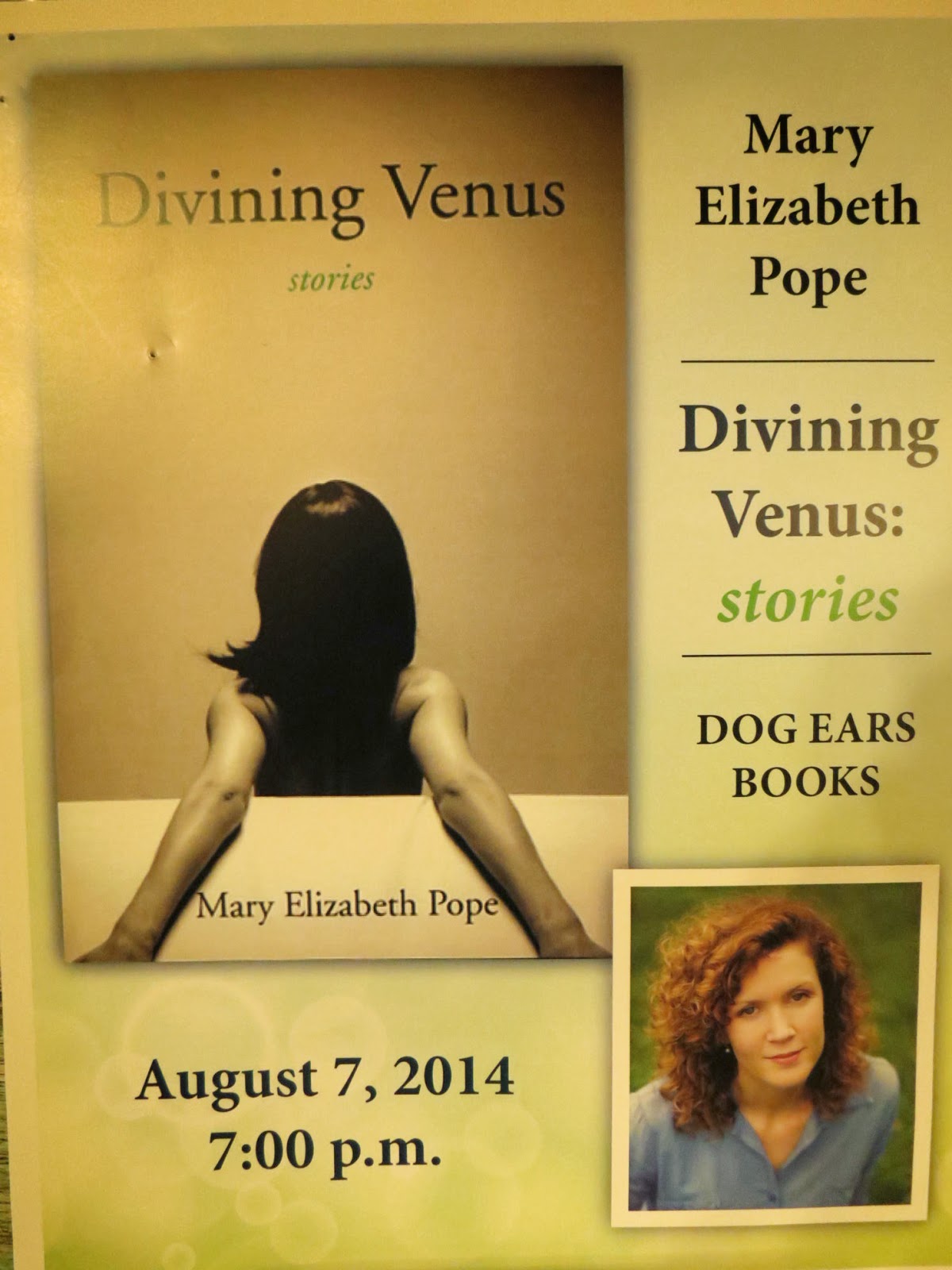 Mary Beth Pope is no stranger to Northport, having worked one summer selling donuts at Barb’s Bakery, but she’s moved on since then, teaching English at Emmanuel College in Boston, where she received tenure this past year. Mary Beth took time out from work on her novel-in-progress to read for our bookstore audience from her short story collection, Divining Venus. It was, I’m pleased to report, yet another standing-room-only crowd. Mary Beth had a good time, too. That’s the way we like it – happy writers and happy customers.

Excitement continued in September. Besides the second Leelanau UnCaged street fair in Northport, Dog Ears Books hosted a book launch party for Newbery-winning author Lynne Rae Perkins and her latest book, Nuts to You. Lynne Rae is a deservedly popular guest author, so I ordered a healthy number of books in advance of her appearance, a number she and I both thought would be sufficient. Advance sales, however, made serious inroads into my stock, so I placed a second order – then a third – and then we still sold out of books on September 19! Later holiday sales of Nuts to You were not hurt at all when the press found out that the Obama family bought a copy on their annual indie bookstore shopping expedition.

I had really thought September would close out the 2014 bookstore event year. One event each for the months of May, June, August and September felt like a manageable schedule, much better than some years past when I’d tried to have three events in a two-week time period. A good year, I thought. Then I heard from Traverse City writer Jerry Dennis about a new venture he and artist Glenn Wolff had underway. With Jerry’s wife, Gail Dennis, as creative director, the three were launching their own independent publishing company, Big Maple Press, and the first two books being issued were new paperback “Indie Bookstore Editions” of  It’s Raining Frogs and Fishes and A Bird in the Waterfall (with a third “wonders-of-nature” title coming in 2015). Jerry Dennis and Glenn Wolff at Dog Ears Books? Of course! Any time they want to come! And so we had another book party in early December.


John Mitchell’s best-selling Grand Traverse: The Civil War Era has been around since 2011, but when John offered to come in for a couple of hours two days before Christmas and sign books for customers, I was not about to turn him down. There are still people in our own township who have not yet read the book, and a couple of them came for signed copies. I think the woman who made a 325-mile round trip, though, may have been the most excited about the opportunity. She had called the previous week to ask my hours for Christmas week and mentioned John’s book. When I told her that he would be at the bookstore in person, her resolve to make the journey strengthened. It was her first visit to Northport, but something tells me it won’t be her last.

My own special treat was conversation with John about his most recent research trip to Cuba and Trinidad for his next book. We even had time before customers arrived for a quick tour through his fascinating travel photographs, as I never turn down a chance for vicarious travel, either.

The Year to Come

Dog Ears Books will be 22 years old this coming year and while my main focus as 2014 winds down is on winter sabbatical, I’ve also been working with authors to put together the 2015 bookstore event schedule. Already the summer calendar looks full! Here’s how it’s shaping up --

In June we’ll have Holly Wren Spaulding, a Hopwood award-winning poet, reading from and signing her new collection of poems and offering a hands-on workshop in short poetic forms. In July we’ll host Loreen Niewenhuis, with her third Great Lakes adventure book, A 1,000-Mile Great Lakes Island Adventure. World War II is the theme for August, with Barbara Stark-Nemon and her novel, Even in Darkness, and Luisa Lang Owen, whose memoir is entitled Casualty of War: A Childhood Remembered.

We hope to schedule a visit from our dear friend and author Ellen Airgood from the Upper Peninsula early in the summer. Her new YA novel, The Education of Ivy Blake, a sequel to Prairie Evers, is due for release in June, so she’ll be putting tour dates together before then. We also hope to meet author David Greenwald (finally!) and introduce him to Northport. The third title in Greenwald’s “Jenny-Dog and the Son of Light” trilogy (first two titles were Frozen Moon and Cody) will appear in 2015. And of course there’s that third, as-yet-untitled “wonders-of-nature” book of essays by Jerry Dennis, with beautiful illustrations by Glenn Wolff. Jerry and Glenn will be in Northport again, for sure.

It looks great, doesn’t it? I’m so excited about all these writers and their books! I look forward to welcoming the authors (and artist!) to Northport, again or for the first time, and to welcoming my customer friends to meet these special guests. Into another year, together we will celebrate printed words and images linking minds across distance and time.

May your new year be happy and healthy, peaceful and prosperous, and may it always be filled with the magic of books.

Wow! What big news you've shared! I'm happy you and David are taking a bookstore sabbatical. You've certainly more than earned it. I hope you have a restful and productive four months away from the store. Will your blog take a break too? All the best, Pamela.

Thanks, Karen. I'll post here from time to time during the winter, as the spirit moves me.

I love getting your blog updates on my phone! It makes me feel close to NP while away. I defended my dissertation in Dec., and since I wrote much of it there (and it includes a citation of your fantastic post on "young adult" lit recently), I'm grateful. For your sabbatical, I suggest Azar Nafisi's (The Republic of Imagination)book (if you haven't yet read it)on America's need for fiction. :)Happy trails, Lucia
P.S. is there any discounting of David's paintings this week?!

Lucia! Congratulations! Doesn't it feel unbelievable to have your dissertation and defense behind you? (I'm honored to be cited!) Thanks for the book recommendation. It isn't one I've yet read.

You'd have to ask David about sale prices. He hasn't announced any, as far as I know.

Bonne St. Sylvestre le 31 et Bonne Annee! We wish you, David, and Sarah a terrific time away on your sabbatical.
Ed & Don

Ed and Don, our warmest wishes for the new year to you in return! We look forward to seeing you again in the spring here in Northport.

I'm very happy that you will get to take a break! Enjoy. Write about it. We'll all look forward to seeing what you and David and Sarah do. The time will fly by, and then it will be spring!

Dawn, David and I agreed that this morning's sunrise looked a lot like spring -- not in the right position, of course, but the pinks and golds and light blues were springlike. Then David said he's already looking forward to coming home in the spring. Oddly, I am, too. But that doesn't mean we're not both looking forward to our sabbatical time away. I will certainly be sharing some of that time here on my blog, too.