When Characters Do and Don’t Become Long-Time Friends


Sarah must be often puzzled by her human housemates. She may recognize occasional value in the movies we watch, because once in a while a dog or other interesting animal appears on the screen, giving voice to feelings not completely beyond her ken. (She looks up then and watches the screen with alert attention.) But what does she make of all the hours we sit quietly reading? For that matter, what does she make of our endless conversations? Dinner, now, that makes sense, but why do they sit at the table and keep making noises at each other long after they’re done eating? They take turns, but it isn’t as if they’re throwing a ball back and forth or anything. What is the point?

Over the weekend, David read to me from the New Yorker, I read to him from Julia Child’s My Life in France, and we watched several more episodes of “Doc Martin” on DVD, our vicarious winter travel to a little seaside village in Cornwall. After a cozy Sunday Cornish binge, David commented on how different watching a series is from watching a 90-minute movie, because with the movie you meet the characters and leave them an hour and a half later, while with the series you meet them again and again, in different situations. Between episodes you wonder and speculate and worry about them. (“What do you suppose...?” we often say to each other, trying to predict a future development between characters.)  I remarked that this has always been a good part of why people follow soap operas. David observed that even in the case of Burt, a character he doesn’t find particularly appealing, he doesn’t want to see anything bad happen to him. We have entered into this little village world, gotten to know these people, and have learned to care about them.

It occurred to me that there is a parallel here with literature, namely one of the differences between novels and short stories. That is, even a long short story, unless it has characters or settings that appear in other stories by the author, gives a reader only a single chance to connect to its world. The collection by Elizabeth Strout titled Olive Kitteridge is an exception, reading more like a novel, and The Wild Upriver, too, by James McVey, while lacking the “closure” of a typical novel, has continuity from one story to the next by virtue of its single character presented in chronological episodes. Usually, however, like a movie, the short story is experienced in a single sitting, and however powerful, however moving it is, when we reach the end of the story, we close the book and leave its world behind. The only way to encounter the characters again is by choosing to re-read the story. We may remember the story and its characters, but we don’t expect future developments. It’s over.

By contrast, the experience of reading a novel can easily command a reader’s attention day after day, sometimes for weeks. We read a few pages or chapters and lay the book aside, but in the interval between readings we wonder what will happen next and are impatient to re-enter the increasingly familiar fictional world. We miss the characters while between “episodes.”

Of course, fictional friends are not perfect. (No friends are, and we are not perfect ourselves.) David can get impatient with Dr. Ellingham’s lack of a sense of humor and his inability to smile. Martin did smile when dancing with Louisa (or “Louiser,” as the other characters call her) at their wedding reception, but he didn’t “show his teeth,” as David wants him to do, and once he told a joke to a patient, but without a smile the patient wasn’t sure it was a joke at first, and neither were we. What bothers me most about Martin is the way he seems to feel nothing at all for dogs. He is similarly immune to the beauty of horses, but dogs? Can a man be fully human who has no feeling for dogs? Humans co-evolved with dogs! What’s odd is that dogs seem to like him, though, and that gives me hope. I’m giving this crusty friend a chance. He had a difficult childhood....

There’s no shortcut to a long friendship. On the other hand, over many years there’s time for a friendship to ebb and flow, wax and wane, and to go through rough patches or periods of neglect, historical fluctuations in attention that a single brief conversational encounter cannot accommodate. If you meet someone only once, for half an hour or half a day, the encounter must have a certain intensity to leave any permanent mark. It demands a sharper continued focus for the length of its shorter existence.

A short story is much more like a movie than is a novel. If your attention wanders in the movie theatre, you’re likely to miss key elements that leave you in the dark in more ways than one. In a film, as in a short story, every word and every image has to count to achieve the overall effect. It isn’t like a novel, where – as in life – the narrator and characters can wander off onto side roads, for no other reason than that the side road presented attractive temptations and they have plenty of time.

Audiences for movies and serial television programs have no problem shifting from the long-term, getting-to-know-you quality of the series to the single-shot drama of film because they don’t expect of one medium what only the other delivers. No one expects a book of poems to be a novel, either, I’m sure (although here, too, Anne-Marie Oomen’s Uncoded Woman is a striking exception, the protagonist’s life unfolded chronologically from one poem to the next), and so no one criticizes a book of poetry for not being a novel. (They may avoid the poetry because it isn’t a novel, isn’t a narrative, but that’s something else again, a side road I won’t go down today.) Well, a short story does not “fail” to be a novel, either. Its essential qualities are quite different.

Characterized by economical narrative, often lyrical imagery, and usually a singular pivotal event in a character’s life, short stories do not generally introduce us to characters who will become long-term fictional friends. But short acquaintances can be memorable, too, even unforgettable. 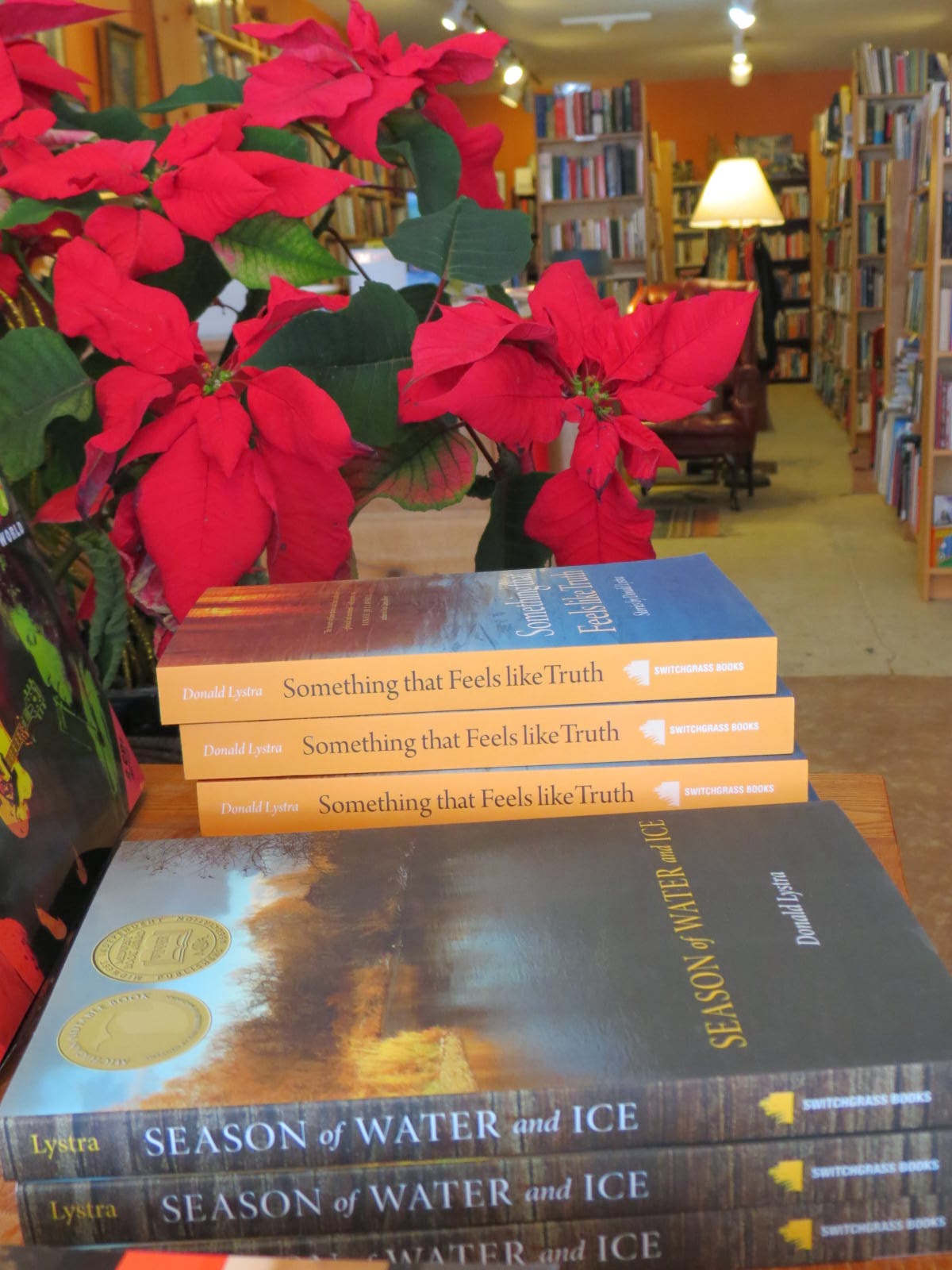 Some authors generously give us both options. Leelanau County's own Donald Lystra (we share him with Ann Arbor), author of the award-winning Season of Water and Ice, has captured another Michigan Notable Book award with his recent collection of short stories, Something That Feels like Truth. Bonnie Jo Campbell is another Michigan author who has written and published fiction in both short and long form. I'll be reading more short fiction this winter, no doubt, in the intervals between episodes of Swann's Way, so look for this topic to come up again soon.

Did Sunday and Monday constitute our January thaw? What do you think? And what do you think about short fiction? You may, as I do, love the place where you live, but I for one would not turn down a week in Florence, Italy, would you? The two women we spoke with in "the scary place," that tiny mountain hamlet in the wilds of southcentral France -- I'll never see them again and did not even get their names, but our meeting stands out in my travel memory book. 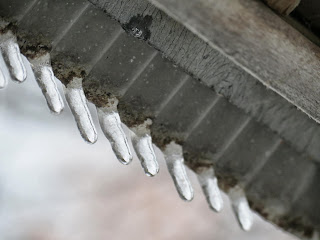 Pamela, Martin Clunes, the actor who plays Doc Martin, is a well known dog lover. He made a documentary series, A Man And His Dogs, which is being repeated here on television at the moment. He has also written a book about his own dogs called It's A Dog's Life. He said in an interview that when they are filming Doc Martin out of doors there is usually a small crowd of spectators, some having brought their dogs. He said he can't resist going up and talking to every dog who comes to see him. It must be difficult for him to play the part of a man who doesn't like dogs, especially when they so obviously like him!

That landscape could get to be a longtime friend, that's for sure. I'd like to weave it into a tapestry. (I have fits of Craft Obsession in the winter. Not to worry. It will pass.)

Sometimes I think writers create such a distinct sense of place that all their work, no matter the length, seems to be part of the whole - a familiar place I'm glad to visit again, even if I don't know who might have moved into town since my last trip.

Kathy, I'm relieved about Martin Clunes, though still worried about Doc Martin. Thanks for the good news there!

Gerry, your comment today, as is often the case with your observations, strikes me as very poetic. Also, there's nothing wrong with crafts. I don't have the nimble fingers for crafts but enjoy other people's work, especially quilts and knitted caps and socks.

I loved this essay/post. Steve

Hey, Steve! Nice to see you here! Thanks for the comment, too, and now I'll admit that I am more than halfway through the first draft of a new short story. Hence the lack of a new blog post....