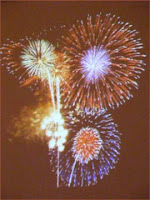 Indoors and outdoors could not have been more different today in downtown Traverse City. On the streets, in trucks and cars, white knuckles gripped steering wheels, while windblown pedestrians on the sidewalks bent forward and made themselves into tight bundles, conserving as much body heat as possible. At the same time, inside the Traverse City Opera House, the mood was celebratory as the National Writers Series unveiled its fourth season, opening this year (for the first time) with a media launch luncheon. I was pleased to be invited, to say the least. 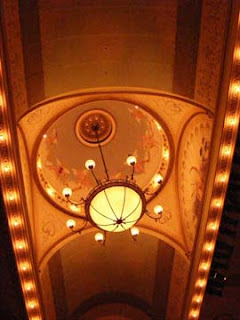 The Opera House is beautiful. Whenever I’m there, I can’t help looking up. The Traverse City Pie Company did a stellar job with the buffet lunch, too. The focus of the event, however—and justly so—was the announcement of this season’s guest authors. What a line-up! You can (and should) link to the NWS website for the full schedule, but I can’t help saying how thrilled I am that there is a philosopher coming this year: Michael Sandel, communitarian ethicist from Harvard. Among fiction writers, the one who stands out most sharply for me is Geraldine Brooks, author of four novels, because I have read three of the four. 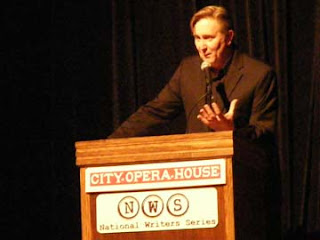 Doug Stanton, a Traverse City native and a nationally best-selling author himself, was clearly very happy to share the history of the series, its mission statement, and plans for the future, particularly the 2012 schedule. Doug and Anne Stanton (she a dedicated journalist whose features we have missed ever since she left Northern Express to team up and work with her husband) are a powerhouse pair of writers. They write with passion, not with ego, and they work like bricklayers at their craft. Over the years, the more I have gotten to know the Stantons, the more I admire them. This is a bit of a digression from news of the NWS, but I can’t help it. Doug and Anne don’t blow their own horns, so this is my salute to them for all the wonderful work they do, their writing and everything else they do for the greater Traverse City community and all of northern Michigan. Bringing nationally recognized authors to our region—what a fabulous idea! And  then they went on and made it happen!

The mission of the NWS is twofold, focusing on students and community. After expenses for the series are paid, every penny earned goes into college scholarships. Another wrinkle on the community side is that book clubs of five or more members can get a 10% discount on tickets when ordering together. 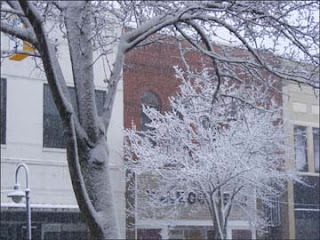 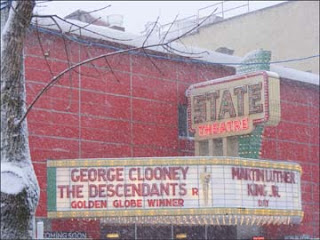 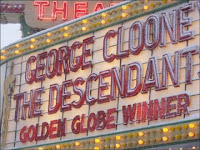 It was good to see old friends and reconnect with people I’ve met only recently, and afterward I didn’t mind at all going out into the blizzard and making my way down Front Street to meet David at Horizon Books, taking in the wintry urban scene along the way.
Even the marquee letters on the State Theatre held snow, and trees on the north side of the street looked as if they had been coated bottom to top, every last twig, with spray starch. It was quite a day.


P.S. Maybe my headline wasn't clear. What I meant is that the National Writers Series has put northern Michigan on the national literary map.
Posted by P. J. Grath at 4:12 PM

Sounds like a great series! And the opera house is beautiful, thanks for taking us with you!! Getting ready now to go out into our own freezing weather, conserving body heat on my commute...

Do they ever air these NWS events on C-Span?

What a wonderful opportunity for Northern Michigan. And I LOVE that first shot...it's so intriguing.

C-Span? We don't have TV. Check the website and see if you can find out. I'm glad I was able to attend yesterday and give you all the news hot off the press. Or off the stage, I guess I should say.

There is always something going on in that block of the Little Big City on the Bay. Nice photos from the Opera House.

Lots going on all over Traverse City. And surrounding area. And over in Antrim County, too, from what I read on Torch Lake Views.

The question from dmarks kept going round and round in my head last night. There may be some confusion over the series title. "National" refers to the status of the writers who come to Traverse City for the National Writers Series. The series itself is homegrown, not part of some nation-wide tour. Geraldine Brooks, for example, is doing a nation-wide book tour that will take her to Chicago, and from there she will depart from her tour schedule to appear on the Opera House stage in Traverse City under the aegis of the NWS. So, probably not going to find these appearances on national television. Yet! In the future? Who knows?

Correction on the book club discount: Book club members who purchase tickets together for five or more events in the series are eligible for 10% off the $15/each ticket price.

Happily we have tickets to see Anna Quinlen, front row (in the balcony)!

The Sisters are hoping to interview Anna, very exciting.

The Grand Traverse Region is a great place for blooming bibliophiles!

That does sound exciting! Our five-member book group will go for Alan Cheuse and Geraldine Brooks (we've read one of her novels together and will read a nonfiction book of hers for May), and David and I will go to see and hear Michael Sandel. Got all tickets for those two events yesterday (Tuesday). I am also making a few contacts to get Northport students involved in the scholarship competition.