Beginning, Somewhat Confusedly, in a Dark Wood with Robert Burns

When I had journeyed half of our life’s way,

I found myself within a shadowed forest,

for I had lost the path that does not stray.


Ah, it is hard to speak of what it was,

that savage forest, dense and difficult,

which even in recall renews my fear:


so bitter—death is hardly more severe!

But to retell the good discovered there,

I’ll also tell the other things I saw. 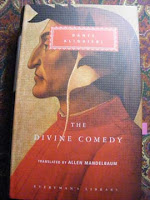 Yes, I began the new year this morning by preparing to descend into Dante’s “Inferno,” as our small, intrepid band will be discussing this section of The Divine Comedy in less than three weeks. We are reading Allen Mandelbaum’s translation, and he dedicates this first book to “Elisa Jane Mandelbaum and her generation,” with the epigraph: A RIVEDER LE STELLE (“And beheld once again the stars”). My apologies to poet and translator for my difficulties with formating stanzas and indentations.
Eugenio Montale, whose essay introduces the volume, gives a complicated argument concluding, “Dante cannot be repeated.” Who would attempt to refute such a statement? I can’t help wondering, however, if any great writer or artist or work of art can be "repeated." Emulated, borrowed from, etc., but repeated? Surely not. Another question is posed as to whether or not the poem may be considered an epic, though it strays from the epic form by mixing styles and not maintaining a tragic tone throughout, and there are many questions about the historicity of the work. Finally, Montale approaches the possibility of miracles. Might not Beatrice actually have appeared after death to the poet? Might not the work itself constitute a miracle? Montale has no problem allowing these possibilities. 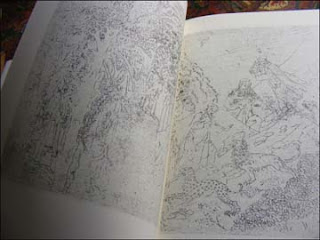 Historical questions are inevitable when dealing with Dante, as they are with Shakespeare My own preference is to meet the work on its own ground, and by “its own ground” I mean not only (but not excluding, either) the ground which gave it forth but also that on which it has lived through the ages and continues to live today, part of a universal human experience, anchored firmly—despite the allegorical title of the entire work and of its three books—in life on this earth, both sensual and cultural, social and individual. Who “of a certain age” has not been metaphorically lost at least once in a shadowed forest, a dark wood?
Our discussion group host has asked each of us to examine the successive rings of the Inferno and determine where we might be currently headed, on the basis of how we have lived and are living our lives--then, how in the coming year we might change course to avoid such a grim fate! This is one question we will be keeping in mind as we read. Another thought assignment is to reflect as we read on why Dante undertook the work. What was his aim?
Another “thick” midwinter book I pulled out for reading at this turning time is Wing-Tsit Chan’s A Source Book in Chinese History, turning first to Mencius (371-289? BCE), many of whose ideas put me in mind of Aristotle, but I'll save reflecting on that for another day.
Before closing, though, can I possibly turn from the old year to the new without Robert Burns? That (ç) was, of course, a rhetorical question, as is this (è): “Should auld acquaintance be forgot,/And never brought to min’?” You know the answer. Nay, lassie, nay, laddie, we’ll no’ forget!

For auld lang syne, my dear, 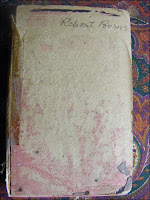 My little book of the poems of Robert Burns lost its cover long before it came into my hands. The front hinge is completely destroyed. I wrote the name myself with ballpoint pen on the remains of the front board. A “reading” copy is all it is, i.e., without any value as an object, valuable only for its contents. But oh, what contents! And seriously? I wouldna gie it up for ony bright, new book! 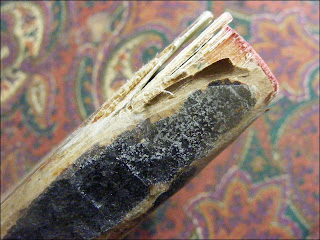 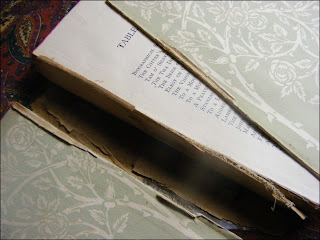 It occurs to me that I am intellectually lazy. I wonder if it's too late to start building up those flabby brain muscles? Dante--for fun.

Dante - was not fun the only time I tried reading it long years ago...but I can see how you might enjoy it. And I agree that no work, art or otherwise, can be repeated be it writing or painting or photography...the 'light' is always changing and nothing is ever exactly the same.

"As sails inflated by the wind collapse,
Entangled in a heap, when the mast cracks,
So that ferocious beast fell to the ground."

The INFERNO, particularly in the Mandelbaum translation, is far from tedious! Although I would hardly call you lazy, Gerry, the way you keep your ear to the pulse of Antrim County and don’t let the rest of us miss a moment of what’s going on over there, either.

Dawn, I gave up last year with a boring prose translation. This time around is completely different. And you have enlarged for me the range of work that cannot be repeated until I think NOTHING can be made the same twice over, any more than we can step in the same river twice.

You wrote in a book! Gasp!

I also love Dan Fogelberg's "Same Old Lang Syne" song, which is one of the very few New Years songs, and is a little related to the well known "Auld Lang Syne"

Helen, I didn't write IN the book but only on the poor, pathetic, bare cardboard that was once part of a proud, full binding. I am NOT writing in my Dante! It is a brand-new copy, has a ribbon bookmark, and I will soon have it bristling like a hedgehog with Post-It notes marking pages. But do I ever write in books? Sometimes, yes! A SOURCEBOOK IN CHINESE PHILOSOPHY has many underlinings and a few marginal notes. My philosophy books are tools....

dmarks, I don't know that song but will check it out on your recommendation. You always have links to interesting secondary and tertiary levels of cultural reference.

I was thinking about echoing Gerry in being intellectually lazy, but maybe better not say that. I wish you good luck with Dante. I can see that diving into the underworlds will inspire you. Perhaps you will even sketch a drawing of what you discover! Happy extended New Year, dear friend.

Thanks for the good wishes, Kathy, and more of the same to you! Isn't it encouraging at this ending/beginning time to have so many good wishes flying around? As for drawing, I only do that as a meditation focus, which means (for me, at least) drawing something actually in front of me, not what arises in my imagination, which I try to keep quiet with pencil in hand. What I mean by that will become clearer as the year unfolds.

I like your drawing explanation. It will be interesting to see what presents itself as a meditation focus.

I began my Mandelbaum edition a few nights back. Cantos 1,2 before my attention span deficit flared up. Then...leopard, lion, she-wolf?
A quick google-442,000'cheatsheets' on the imagery of
those three carnivores...so I picked up Nicholas Wade's 'The Faith Insinct'. I rather enjoyed
his 'Before The Dawn' (no imagery?)
I will return to Dante, interested in his near contemporary opinions
on Frederick II, that unique anachronism of the age....
meanwhile I look forward to your
Inferno reports as inspiration and
much-needed crutch!

My response to 'BB's online search: TOO MUCH INFORMATION! The endnotes are plenty for me, and I don't read every single one of those. Reading poetry is like reading in a second language: you need to let it envelope you and not try to look up every other word, which is a surefire way never to catch the rhythm and music of the language. That, at least, is my opinion. My "classmates" in the reading group are more studious and do much more background reading than I bring to our discussions.

My Grandmother (Dad's Mom) was a Burns. Dad's middle name was Burns. Story has it....
Probably explains a lot.

We broke the line by not including Burns in any of our boy's names.

Well, be sure to pass the story on so that another generation can start up again with the name. I'm curious why you didn't use it.