Continued from Yesterday (or, This I Believe) 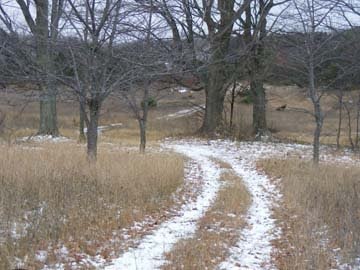 I began writing this as a comment replying to Gerry’s comment, but it got so long it seemed to deserve a separate post. This is what comes of having Bruce in the bookstore while I’m working on book orders (really!) at home! The article under discussion is from this week’s Northern Express.

Gerry, I’ve been musing on your phrase “romanticize forgiveness” and wondering (1) what that would mean, (2) if it’s bad, and (3) if I do it. But maybe my position will be clearer if I don’t attempt to answer those questions directly, instead just saying what I believe.

As a pragmatist, I believe in what works. My philosophical preference is for solutions that work, in contrast to ideologies that don’t (and that tend to drive people to polar standoffs). As a romantic, I believe there is beauty in the world--in people, in very ordinary corners of daily life, as well as in magnificent scenery—and that love has real power to change hearts. Putting together pragmatism and romanticism, I believe that love, listening, caring and forgiveness work much more often than most human beings--me included--put them into practice.

From earliest childhood, I have found forgiveness one of the biggest challenges in life, and I don't think I'm alone. It is so much easier to be outraged, to take a stand on the moral high ground and hand down judgments, to harden one’s heart against those whom we see as wrongdoers. Ideologies justify this stance. Pragmatism argues against it, simply because it leaves everything as it was rather than changing the world.

Many years ago I stumbled by accident on an enormous insight. It was in the days of long telephone cords (remember those?), and mine had taken a lot of abuse, as various people in the household, in search of privacy, had pulled the cord around corners and through doorways, twisting and stretching it until the wires inside the plastic finally gave way. This was also in the days when the phone company came to the house and fixed things on their dime. (This is probably hard for young people to believe, but it happened.) So, anyway, there I was at home with a harried phone company employee working over my phone and becoming, it seemed, more and more angry by the minute. Soon he was practically shouting about people “purposely destroying” phone company equipment. He had a particular axe to grind against “welfare mothers.” I was not a welfare mother but wondered what that had to do with anything. What if I had been? And why would anyone destroy their own phone on purpose? Was this man crazy? He was so loud and threatening, and I was so frightened at being alone in the house with him, that I moved to the other side of the dining room table so as to have a big piece of furniture between us. He quivered with rage, I shook with fear. And why we were such deadly enemies, I had no idea! Where had this furious battle come from?

As I say, the next move was not one my conscious mind recommended. Unlike Vogl, I did not think through the situation to reach a decision. In the heat of the moment, pressed to the wall, cornered, desperate, I heard words come out of my mouth before I knew they were there: “You must be having a really bad day!”

He collapsed like a punctured balloon. His dog had died the night before. The phone company had guys working double and triple shifts, trying to keep up with all the students moving into dorms for the new semester. It all poured out. Gradually, both of us stopped shaking. Crisis averted. That strange, surprising episode has stayed with me over the years. He needed to have both his grief and his hard work recognized by another human being. That was all it took.

I don’t even remember if he apologized. When I tell this story, people often ask the question. No matter how overworked and grief-stricken he was feeling, they say, it wasn’t my fault, and he shouldn’t have taken it out on me. All I can say is that I was not the conscious target of his behavior and that the two of us somehow broke through the emotional impasse. Neither of us deserves “credit,” really, if anyone wants to give a moral score for the incident. Who cares? We got past anger and fear to sympathy and understanding, and I’m pretty sure he went on with his day more relaxed than he’d been before our encounter.

Forgiveness can’t be a blank check extending into the future, and it isn’t up to me to forgive a wrong done to someone else. I also don’t buy the recent idea that forgiveness has nothing to do with the person forgiven but is only “about” the forgiver (I’m probably wandering far afield here—forgive me!), as in “I forgive you because I’m getting on with my life, but don’t expect me to have any further contact with a slimeball like you!” That’s forgiveness? I don’t think so! I think you and I would agree, Gerry, that a sincere apology and change of heart are often preconditions, if you will, when the stakes are high, but I also suspect you believe, as I do, that people’s hearts can be opened to make apologies and amends if they are approached in the way Vogl approached her neighbor.

I’ve said that I believe in this kind of approach but that it is difficult for me to practice. The effort is much more than it took in adolescence not to keep “envying girls with nice noses” (Amy’s burden in Little Women, remember?). There are books that help me, both in the reading and the re-reading. I need a lot of reminders. But there’s nothing like having real-life models. Vogl looked to Martin Luther King, Jr., and to Barack Obama. Vogl herself has now become such a model for me.
Posted by P. J. Grath at 7:14 AM

I read Northern Express, but somehow I missed this article. Glad I caught it.

Back from Thanksgiving with Rob the Firefighter and the Lady Alicia and see that I have some writing to do!

My "romanticize forgiveness" was a disclaimer: While I believe that forgiveness is powerful, I don't believe that when A forguves B the sun comes out, birds sing in the trees, and we all live happily ever after. Maybe what I'm thinking (I sometimes figure that out as I write) is that forgiveness isn't so much an action as a path, or a long process of coming to terms with what is. Anyway, while I recognize and appreciate your romanticism, I don't mistake it for sentimentality, and I don't think you romanticize forgiveness. (I suspect it might be not "bad" but not pragmatic either if you did!) Never know where I'm going to end up when I visit Books in Northport.

Hope everyone else had a good Thanksgiving, too. What a wonderful holiday--all about being together and enjoying good food!

Gerry, your explanation is pretty much what I thought you had in mind, but I'm glad you used the phrase, as it spurred my thinking. I never know where I'm going to end up, either, when I start writing. Now, after all my years of study and three degrees in philosophy, finally I know what I am: a romantic pragmatist. Thanks to you!