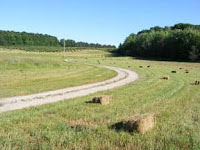 Vicariously in New York with Emily (see yesterday’s post), I learned that it was Marcella Hahner, buyer for the Book Section of Marshall Field’s in Chicago, who originally came up with the idea of inviting authors to the store to sign books.

“When I met Marcella only a little over ten years after the establishment of the department, she had built it into the biggest retail book business in the world…. She had established and she maintained her absolute sovereignty over publishers by the artful device of selling more of their books than any other retailer even approached. Every bookseller the country over based his order on the number of volumes Mrs. Hahner had requested.” Who knew? One little woman in the Second City led the way.

While Mrs. Hahner did invite authors to Marshall Field’s Book Section to sign their books, the signings were not generally public events but intimate tea parties held in the buyer’s office. If Mrs. Hahner liked the author (and she usually did) and trusted him (always “him”) around young women, Emily was invited, meeting many famous writers of the era. (So much for those snooty friends of hers who left her out of their dinner dance party, I thought with satisfaction as I read this chapter.) But in 1918 Marcella Hahner inaugurated a Book Fair at the store, with 56 publishers and many live authors. “The authors spoke and autographed their books for thousands of people, most of whom until Marcella brought their attention to the matter had never owned nor particularly wanted to own an autographed copy of anything.” 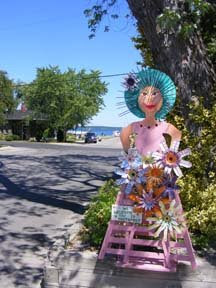 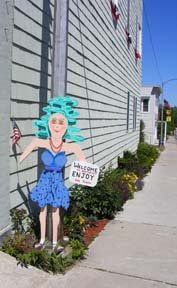 I had to tear myself away from housecleaning and reading (which was more difficult?) to get up to Northport about mid-afternoon, checking with Bruce on bookstore happenings of the day before making my usual rounds of the village with Sarah. Thanks to the creative and industrious David Chrobak, there are new ladies around town, colorful and stylish, welcoming visitors for the week of the 4th and beyond. Here are a couple of them. (No one ever knows what David will come up with next.) It was a busy late afternoon at Dog Ears Books, too, visiting with and selling books to out-of-town customers and planning with Woody for a show in the gallery in three weeks’ time. 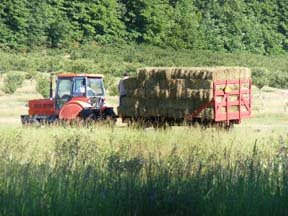 Later, back home, I found a hay crew in the fields, loading wagons with hay bailed only hours before. Yes, the sun shines, so….

We’re all trying to “make hay” this time of year, which reminds me to remind everyone that Saturday is the Promise picnic and silent auction at Marina Park. The Promise scholarship program for Northport graduates is off to a good start and deserves continuing support. Check their website (Northport Promise) for more information and for a list of items included in the auction. 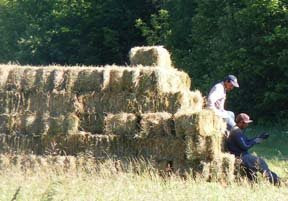