What Can I Call This Potluck of a Post?

It post is a miscellany, but I'll back and start with our 2021 trip to Bisbee, which is where my eye was drawn to that Kafka book set against a brown paper-covered display window. Some of you might remember a time when I warned against going to Bisbee on a Monday. Lesson learned. So this year we prudently waited until Tuesday to make the trek -- and found the town was closed up just as tight! The high point of the trip was being allowed to sit on the outdoor gallery of the public library (library itself closed; pickup only) to try to read a New York Times (available nowhere else in the county) in the wind. 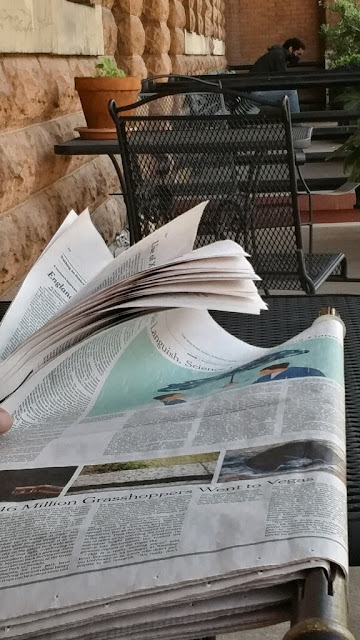 There are always interesting sights to see while walking around Bisbee, however, so the long drive was not a complete loss. There was that Kafka book in the window, after all. Not many posters advertising events, but a utility pole studded with staples caught my eye. And I don't remember this attractive building from other visits to Bisbee.

The amazing part of this thin-on-plot story is that we didn’t acquire a single book the whole day. Library, FOL bookstore, and Meridian Books (down the Rabbit Hole), all highlights of former trips to the county seat, were each and every one closed and locked. But yes, we do have plenty to read as it is.

Reading -- and a Book Review

In general, I’m not one to observe a lot of official days and weeks and months, but I’ve made more of an effort for Black History, Women’s History, and National Poetry Month this year – really, don’t you think history should be inclusive every month of the year and that poetry should be part of our daily lives? Anyway, be that as it may, think what you will, I’ve been reading Thomas Lynch, Jim Harrison (always), Judy Juanita (below), Marge Piercy, and Anne Sexton the past couple of weeks, and it’s Judy Juanita I want to write about today.

When a young friend asked me once, “What were the Sixties really like?” I told her it depends on who you were, how old you were, and where in the world and country you happened to be. Virgin Soul, Judy Juanita’s semi-autobiographical novel, published in 2013, was my first introduction to her writing, when an ARC from the publicist found its way to me at Dog Ears Books. Like her fictional protagonist, Juanita found herself “where it’s at” during her junior year of college. She had joined the Black Panther Party in 1967, and when Huey Newton was jailed he appointed her editor-in-chief of the Panthers’ newspaper, which began as a strike journal, resulting in the first Black Studies program in the United States. Since then Juanita has published a number of plays, poems, and essays, and now a new book of her poetry, Manhattan, My Ass, You’re in Oakland. 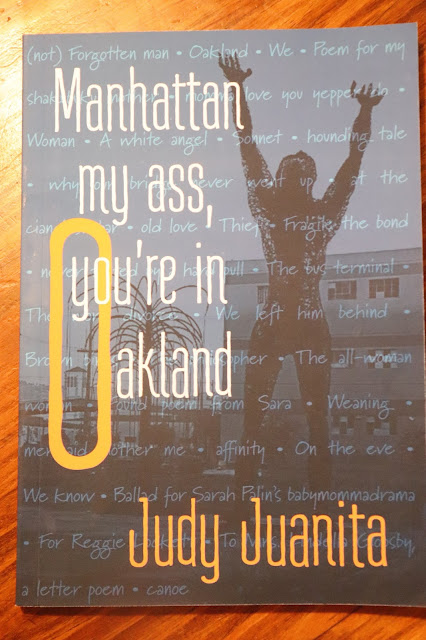 The title is a preview of the poems in the book: Here is a poet who pulls no punches. Whether her subject is love, sex, or friendships, violence against women or racial injustice, her distinctive voice tells the story in a way you’ve never heard it before and might not have the nerve yourself to repeat. She has the nerve, though. Her voice is clear and unhesitating, her command of a variety of poetic forms sure, as she uses those forms in her own new ways. Juanita has performed her poetry on occasion, and though I’ve never seen her in person or heard her with my ears, I hear her voice in my mind when I read her work. I’m not alone, either. Kirkus Reviews has called her poetry “unsettling, important, and unforgettable.” 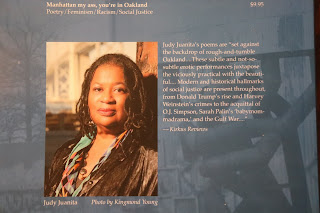 Manhattan, My Ass, You’re in Oakland

It isn't only books that take me to exciting places, though, and the Artist and I don’t have to drive all the way to Bisbee to have a good time. This past weekend was once again WJRA – Willcox Junior Rodeo Association meeting out at Quail Park. As we were leaving, after a very satisfying couple of hours watching and admiring and walking around with my camera (see my completely incomplete visual story here), I said with a happy sigh, “There’s nothing about it that I don’t like!” My happiness of the day included a very dusty little dog that reminded me of a smaller and much older and wiser version of Peasy. “Wouldn’t this be the perfect life for Mr. Pea?” I asked earnestly.

For now, however, we are making the most of our silly little snuggle-bug, whose "pack time" personality could never have been guessed by the skittish, fearful performance he put on in that cold, bare cell at the pound.

Bisbee! I just finished a J.A. Vance book - because of your long-ago recommendations - and the investigator, J.P. Beaumont and his wife Mel, traveled to Bisbee on a path to a cold-case murder. It was called ‘’Second Watch’’ and had several plots going with twists in each one. Bisbee, Seattle and an island home they went to off the WA coast, all become lively parts of the book. Thanks, Pamela for the suggestion! I have a sample of her ‘’Dance of the Bones’’ to see if I ge that one, also. That photo of the house which is now a recording studio is just beautiful. And your live-wire Monsieur Peasy is keeping you busy - and entertained, it looks like!

Bean!!! I haven't gotten into the Beaumont series yet. Am sticking with Sheriff Brady for now, as Cochise County is where I am, but I do have friends in Seattle, and it's interesting that Beaumont gets down to Bisbee. I just now (Thursday evening) posted again about my current reading and my thoughts about Peasy. Every day is a mystery and an adventure, it seems, with surprises around every corner -- and not only in books, either! Glad you like J.A. Dance. xxxooo!!!