When Letters -- on Paper -- Were Everything 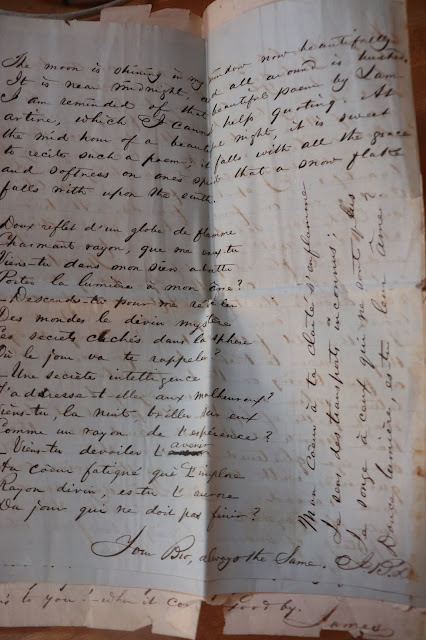 Reading a diary from before the Civil War, I am struck by the number of letters the young male diarist tells of regularly writing and receiving. His lawyer brother in New Orleans seems to have written to Silas almost every day, and it was a rare day that Silas did not write to James or to Warren or to one of his sisters back home and perhaps also to the editor of a local newspaper. And all his correspondence was, of course, conducted in longhand (Does anyone still say ‘longhand’? Or was it only necessary to make the distinction when secretaries took dictation in shorthand?), with every cranny of space filled.

I have trouble considering anything a book if the words aren't on paper. Likewise a letter. E-mail messages can be important and precious -- I don't pooh-pooh them. But they are not letters. And a "diary" kept in digital format? Really?

Silas did not write in his diary every day, but when he did, it was in addition to letters he had also written that same day. The diary he kept for himself; the letters were to and for others. Way back then, without cell phones or e-mail or so-called social media, letters were the way he and others kept in continuous contact with family and friends. His letters to newspaper editors, less frequent, were a way to voice his opinions publicly, as he also did in amateur debates and public addresses. 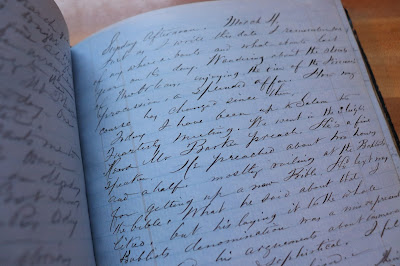 The debates in which he participated, like his letters, were as much public entertainment as they were communication. Conversation, reading books, and playing musical instruments were ways to pass a quiet lamplit evening at home in those days, and letter-writing was another way, but Silas also made preparation for a debate or for offering a public address by writing longhand notes in the pages of his diary, another occupation that filled his evening hours and also served as preparation to reaching out to others, near and far. Back then, townsfolk and country people regularly traveled to schoolhouses, village halls, and churches for evenings spent listening to debates, public addresses, and sermons. Yes, even sermons were entertainment in those days, with visiting sermonizers critiqued afterward in depth by audience members -- often as much or more for performance quality as for theology, judging from Silas’s diary.

In our time, now the third decade of the 21st century (can you believe it?), a general “felt need” for handwritten correspondence seems almost to have disappeared. We have public forums for our every thought and deed in social media, the instant gratification of texting (often with almost instant replies), and none of it requires paper or stamps, let alone a trip to the post office. But if letters are classed by collectors as ephemera, what can digital exchanges be called? Even if the storage media are somehow preserved, is there any guarantee it will be readable in future? Whereas I can take in my hands Silas’s diary and the handful of private letters tucked into the diary pages, all written over a century and a half ago, and read them as if they were written yesterday, how many of the thoughts and experiences shared on Facebook will anyone be able to visit a century and a half from now? 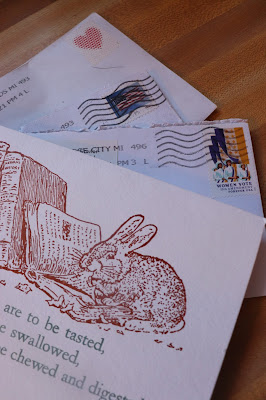 As thrilling as it is for me to time-travel via Silas’s diary, it is just as thrilling or more so to find a letter in my own mailbox, written to me by a sister or a friend, bearing postage and return address and cancellation that tell of its journey and the thought that went into someone caring enough to reach out to me over hundreds of miles. I can tear the envelope open in haste or slit it carefully with a knife, read the letter immediately or tuck it away and carry it with me to enjoy later – or I can do both, reading it eagerly at once and folding it away to read again an hour later, beginning already to form in my mind the reply that will eventually becomposed and sent off, a personal, intimate, committed-to-paper, taken-time-to-write missive sent to one person alone -- although perhaps to be shared with a partner or friend at the other end, too, because once the letter reaches its destination it belongs to the recipient. The gift has been given. 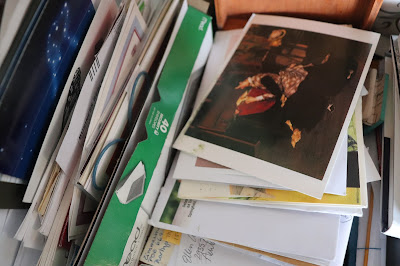 Then there are the enclosures that letters may contain, as delightful in their way as the letters themselves. This old bit of "ephemera" captured my attention, and I wish I still had new snapshots every week to send with my own letters. Sadly, our photographs are another thing we rarely commit to paper any more. 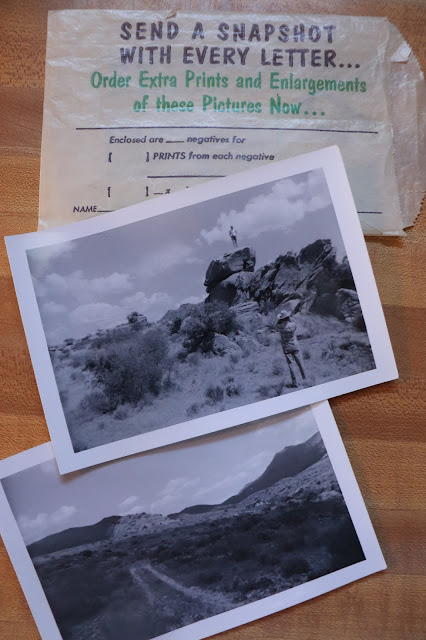 The biggest problem for me with Sundays is that there is not even the possibility of finding a letter in the mailbox. Monday’s return to mundane, everyday life does not trouble me at all, because the postal carrier may bring me news and thoughts from someone I love.

One friend back in northern Michigan who shares my enthusiasm for written correspondence is doing more than writing letters: she has started a movement for slow correspondence called Leelanau Letter Writers. You don’t have to live in Leelanau County, Michigan, to join. There are no membership fees, no meetings.

You may also elect to join the LLW pen pal group, but you don’t even have to do that. Just let it be your inspiration to write and mail letters. Will you write about what’s really on your mind? What will that be? You need share that only with your recipient. It's that personal. Who will receive the next letter you write? No need to tell me -- just write and send that letter. On paper. 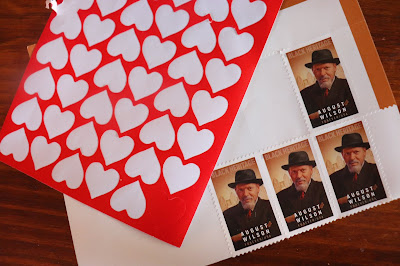 Oh yes. Real letters, it's so wonderfully warm to open the mailbox and find a real letter. I promise to send one tomorrow.

Dawn, I am disciplining myself today. I have vowed to do housework until noon and not walk down to the mailbox until then!

Thank you, Marilyn -- and for all you are doing with LLW!

Oh my!! Handwritten letters! I love 💕 thinking of receiving such a thing, but it has been many years since that has happened. I remember when I first moved away from Rhode Island (goodness...1965) to Michigan, MSU, and I would write long letters to family and friends. Many people, receiving the letters never answered or just sent a note card in response. I wondered if they didn’t like mine, so I kind of stopped sending them. I relied on telephone calls for family (...paying the charges), and calling when I was in the state of R.I. Life has moved forward and now here we are in a text and email way of communication.
We as a family, 2 of four siblings and 3 cousins, during this pandemic, have enjoyed sending long emails of our silly, funny or odd days, and it has made us feel very connected. The younger members (we’re in our late 50’s-70’s) prefer short texts, i-messages or verbal messages of 2-3 minutes. Hmmm.
I wonder if I started a letter-writing campaign among those I think would respond - would they like that? I think I’ll try! Thanks, LLW & Marilyn! You have encouraged me! I’ll let you know what pops up in my mailbox!! 😀 !

Bean, I know you and I wrote letters when you were in El Paso and then out in (city?) California, because you asked me to send you the Help Wanted column from the Traverse City Record-Eagle. Back in those days, R-E's Help Wanted list was a very short column, and half the jobs listed were for baby-sitters. And then you wrote to me from South America, too. Before Brazil -- ???

Not all my friends are letter-writers. With some I only e-mail. My sisters and I do it all, however -- snail mail (letters, cards, packages), e-mail, texts, and calls.

First-class letter postage was 4 cents back when I was first sending letters, and the 4-cent stamps were magenta in color and featured the head of Abraham Lincoln. That dates me, doesn't it?

Let me know how your experiment goes!

(And please note that I find it hard to communicate with you without exclamation marks!!! xxxooo

Baby-sitting and waitressing and maybe secretaries, if you’ve got shorthand! Those were the days 🎶 (daze) my friends 🎶 ! Yes, we wote for a while when I was in Bogota, Colombia. Yes! You’re right...past lives seem like an old movie! When Antonio first brought me to São Paulo, in 1975, I was a ‘tainted lady’ with two husbands behind me,,,,but, hey! 43 years later, we’ve been together, and his three siblings aren’t with their original mate....Life 🎶, that’s what people say 🎶
So, right now, there isn’t time for letter-writing because we’ll be flying up to Noo Yawk this Sat. May 1!! I’m trying not to take stuff, but my best friend came by with 15 books!! I want them ALL! Can. Not. Four, 4, quatre, floors to climb. HEAVY written on 🧳 luggage!
But I promise to let you know if I find letter-mates ‘out there’ - Haha - even You!
Lovely to be in touch with you again! We’re trying to see all family & friends before we go, and I’m packing & unpacking things, so I’ll say ‘Sayonara’ until we get to our Brooklyn place....if we get up the stairs!! XXXOOO!

We've been wondering when you would be going back to Brooklyn. We should be in Michigan ourselves by the first of May, and I hope, hope, hope to see you there in July!

Ah, yes! Boxes of books can be heavy! I'll be taking some back for my bookstore, but we won't be packing a lot of clothes.

Thank you so much for taking time to leave lines of words and music for me here, Jeanie! xxxooo!!!