As we near and finally cross the state line from New Mexico into Arizona, I feel my smile will crack my face. When we pass the first little Arizona ghost town, Steins, one we have ever only seen from I-10, the sight of it makes me want to laugh out loud. The peaks of Dos Cabezas are visible from the edge of New Mexico, too, if you know where to look. Happy sight! Though the naked eye's spotting of them would not mean much in a phone or camera image.

Arriving at the cabin midday on Tuesday (five days after leaving our Michigan home), the Artist immediately set about the mundane tasks of reactivating electricity and water while I carried bags and boxes in from the car. Peasy watched our every move intently. Did he experience the same comfortable familiarity I felt? Everywhere I looked were dear little pockets, such as the little desk holding my field guides, watched over by a 2021 horse calendar whose pages I eagerly turned from May to November. Of course, there was sweeping and dusting to do, but it was a pleasure, part of making myself at home again in the cabin. 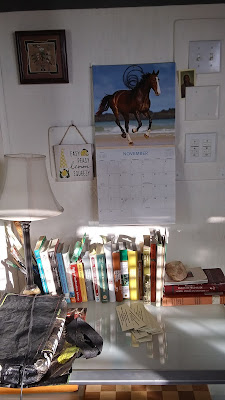 One small part of the happiness of unpacking was finding my camera, which I was certain I had brought along but hadn’t been able to find on the trip itself, reliant on phone alone for images along the long, long trail west. And so, unaccustomed to carrying the camera, I neglected to take it out with me on Wednesday morning, when Peasy and I met our friends, Therese and her dogs, for a long-awaited reunion, but here is a phone image from Friday’s get-together that we can pretend was from Wednesday.

And then the rains came! First sprinkles, as I was working in the backyard to clear it of four-foot-high weeds that had grown up into a forest during the summer. Then a downpour! And then a text came from Therese: “Rainbow alert!” I found it the most spectacular rainbow I have ever seen (though it’s possible that rainbows fade in memory and that others in the past have been equally spectacular), stretching full and bright from one end to the other, with a fainter second rainbow arching above the first. Oh, for a wide angle lens! As it was, Therese captured by far the better image from her house. 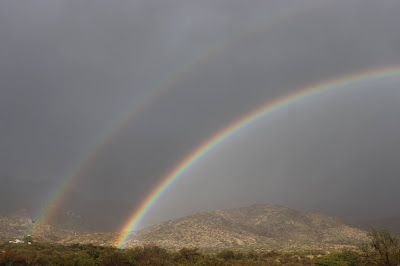 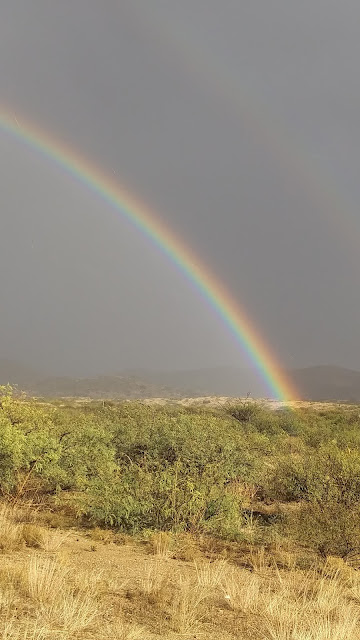 Thursday. Thanksgiving! Before going to dinner with our neighbors, I began a list of things I was thankful for, and with each item added I thought of five more. As my friend Juleen and I have often agreed, each of us can say truly, I am a lucky woman! I was that day and still am supremely grateful that the Artist and I and our little special needs dog are all still alive and together and here for another winter in Dos Cabezas, seasonal retirement for the Artist and me, homecoming for our wild desert dog. And I must say that Peasy clearly remembered not only Therese’s dogs but Therese herself and showed not a shred of nervousness when he approached her fearlessly for a treat from her hand! Like a normal dog!

Dinner with neighbors on Thanksgiving was lovely, the beautiful holiday table overlooked by a piece of art over the mantel by our hostess, her COVID project. Feathers and birds are souls we lost, winging their way to heaven by way of the peaks of Dos Cabezas. 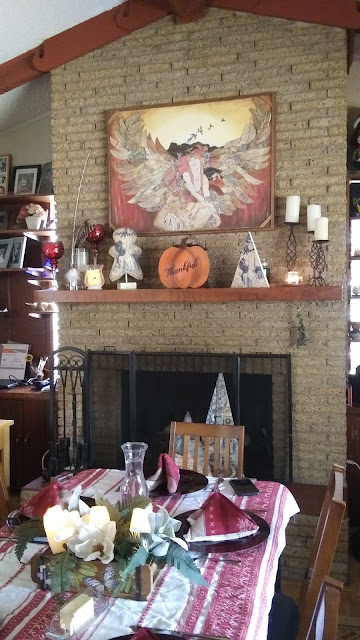 Again on Friday, this time without a planned rendez-vous, Peasy and I encountered our friends once more down in the wash -- that is to say, Peasy and Molly found each other on the range, which always means a lot more exercise for both of them -- and thanks to that chance encounter, also, I was invited to help set up the Christmas “tree” in the little cabin down the road that will be the scene of a holiday arts and crafts sale this coming weekend.

Pine trees do grow at higher elevations in Cochise County, Arizona, but down here on the high desert floor the favored plant for a Christmas tree is the dry stalk of a century plant, Agave americana, which you’ll remember is a member of the asparagus family. First we measured the space between floor and ceiling and sawed the bottom of the stalk to accommodate the space. Then we set up sawhorses on the porch to string the lights – a new experience for me (I’ve only seen the finished product until now) but one my friend Therese has done many times before. A bucket weighted down with rocks and sand holds the “tree” in place, and it will look even more beautiful decorated with ornaments. 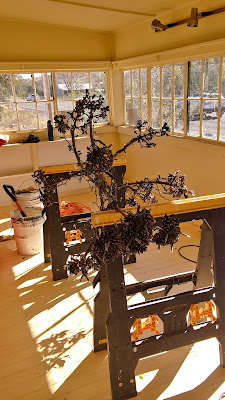 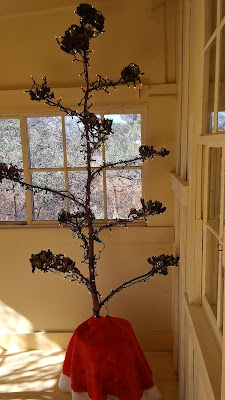 Meanwhile we are here. Enjoying reunions. Settling in. Acclimating to the altitude. Recovering from our long, long journey. 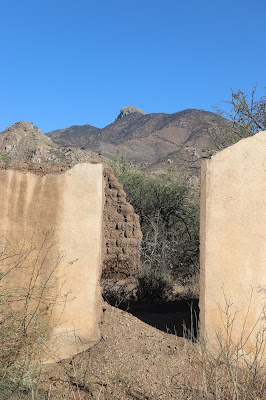 Beautiful country and beautiful accompanying comments. Gee and Wow! Lucky you three in that land of such amazing beauty! Yes, your neighbor deserves the Rainbow Prize! It made me smile and be happy for all of you who are there!

Jeanie, I know you have returned to summer down south of the equator, so I hope all is well with the family there and that you will have a joyous holiday season together.