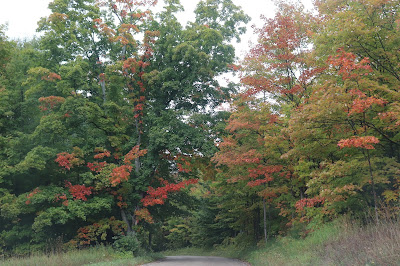 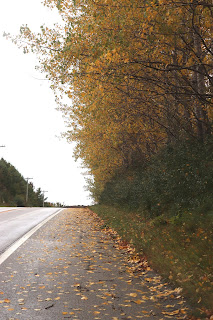 [Orig. written 10/4, revised & published 10/6.]
Apple harvest is underway, field corn looks good in the land, and leaves are turning – popples to gold, maples to orange and red, ash to every color from banana-butternut to deep purple. October is here, a month of transition and variability, when any day of any week might steal a march from any other month of the year. What now? What next? In 2020, we ask those questions with more than the usual urgency, not only of the weather and the autumn season but also with respect to COVID-19 and toxic American politics, two parallel pandemics that have converged this week in the nation’s capitol. With more life behind us than ahead of us, the Artist and I wonder what we will see in what time remains to us. 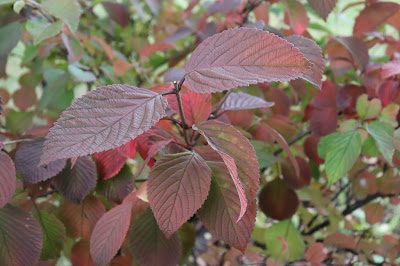 Sunday morning could not have been gloomier: cold, wet, dreary, grey. I forced myself to get up and dressed ... to peel apples ... to cook up a pot of applesauce and get it processed in jars. My other self-assignment for the day was to clean the refrigerator, and I almost cancelled that plan, because -- Who would know? Who would care? But I reminded myself that it takes less time to clean the refrigerator than it does to postpone the job, and after it was done I opened the door a few times to admire my very minor household accomplishment. Sometimes we need to give ourselves positive reinforcement wherever we can find it. I made applesauce! I cleaned the refrigerator! I did not hide my head under the covers all day! 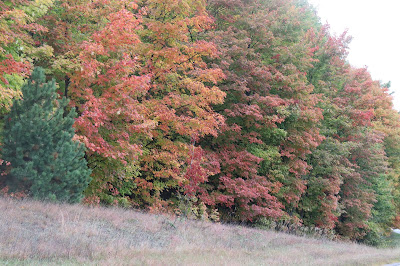 It was a mostly gloomy day, however, certainly not one I'd want to repeat Bill Murray-fashion as Groundhog Day, although that is one of my all-time favorite movies. Could I learn something important by living last Sunday over and over? Maybe "let go" of a friend's comment that disappointed and saddened me? But then, on the other hand, there was a long conversation with another friend, a dear, dear person, and we both felt better after that. [Note to self: call and write to friends more often!]

An inspiring little paperback I read cover to cover over the weekend was Jimmy Carter's Why Not the Best? which takes its title from an encounter young Carter had with Admiral Rickover. Instead of praising the young man for his class standing, the admiral asked if Carter had always done his best, and Carter had to admit that he had not always. "Why not?" the admiral demanded. 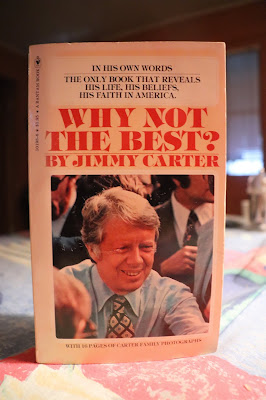 In this 1976 autobiography, Carter writes in detail about his childhood and family, his Navy career, his run for the governorship of Georgia, and finally, as he resolves to make a bid for the presidency, his belief that the American people deserve and will respond to honesty in their political leaders. There is an entire chapter on what was a very crooked election process in part of Georgia and Carter's role in cleaning that up, a volunteer mission he continues around the world to this day, and that was very enlightening, but the thing that impressed me most was how, when he decided to run for elected office -- eventually for the presidency -- he set himself to learn what he would need to know in that office. He read and studied. The energy plan he put forward as president was no half-baked opinion off the top of his head but a comprehensive program carefully formulated after much study and consultation. That is, he took the job of president seriously before he ever ran for the office. He resolved -- I'm saying this; he did not -- to do his best. I think the title of his book was meant to ask why Americans should not demand the best of everyone in government -- and of ourselves.

Carter is often called, by those who find his presidency unimpressive, our best former president. I think history will look upon him more favorably. I make no secret of my admiration for him. 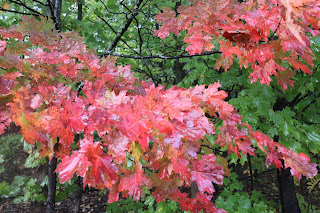 A black woman being interviewed on the radio (and I'm sorry I did not make a note of her name) referred to "the two pandemics" we are dealing with in the United States right now, and I borrowed her idea for my opening paragraph today. As difficult as it is living with sensible COVID-19 social restrictions, to me the obvious fact that we are not "united" on that or any other question right now feels far worse. Hateful bellows or smirking, snide remarks: neither helps anyone feel better. The friend whose comment knocked me sideways on Sunday thinks I'm too generous in my thoughts and should instead wish bad things on those whose politics and social practices I abhor. Oh, friend, do you think it comes easily to me, not wishing evil on evil-doers, trying not to hate? You little realize how hard I struggle, on a daily basis -- an hourly basis! My sense of outrage is no less keen than yours! And I do hate -- do truly hate -- all appeals to our baser natures and all encouragement to hate! Does that sound like a contradiction?

When it comes right down to it, though, most of us are conservative on some questions and liberal on others. On certain complex issues we may not have reached a settled position but are still trying to sort out everything involved. And that I don’t see as a contradiction. Computer algorithms can afford to be purely rule-driven, because the world of a computer program is limited from the outset, each program modeling a piece or an aspect of the larger world for some specific purpose. Real life is more complicated, because nothing in our many-colored world is left out!

Moreover, human beings live in a world of contingency. We find ourselves in some situations as a result result of our own prior choices, it’s true, but many situations result from choices other people have made or even from natural processes we could not have foreseen. Partisan, knee-jerk responses, therefore, whether always ‘liberal’ or always ‘conservative,’ too often miss the mark. What good are our own brains, the meaty ones inside our bony skulls, if we are going to run a preset program to yield a programmatic answer to any and every situation? Sometimes – shock! -- it even may even make sense to change our minds! (What a concept, eh?) On some issues both “sides” have important things to say, serious considerations we need to take into account, and there are many issues with more than two “sides,” although our two-party political system has a hard time accommodating and acknowledging that truth.

Here, though, is the bottom line: How should we treat this precious earth we could never ourselves have created? How should we treat one another while we are here? And what kind of country do we want to bequeath to future generations? We Americans are in a pivotal moment right now, one that will all too soon be history and one that the future will judge us by.

Long after we have returned to dust, the consequences of our decisions will be playing out. We won't see the harvest, but it will come. 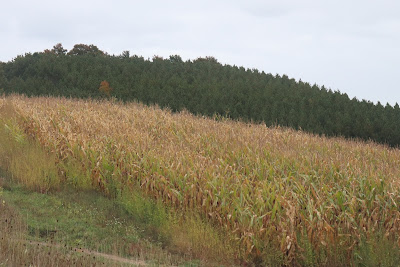 I feel so sad almost all the time these days. I don't feel safe expressing my opinions in many places, even to some of my family. There are so many things I want to do that I'm holding off on waiting for some resolution to this virus. We've been so careful, but we made a mistake when we opened our home to husband's brother when he was released from the hospital. He was here for a week, each day getting more and more sick, until he collapsed on Friday and was taken by EMT to the hospital where he tested positive for covid. Now Bruce has tested positive for covid. I'm still negative, but will be tested again later this week. I'm exhausted just thinking about the next couple weeks. And sad about the state of our country.

Oh, Dawn, I am so, SO SORRY about your husband and brother-in-law and the new worry you have now on top of all the pre-existing worries! I hope Bruce's case will be as mild as it can be and that you will continue to test negative, but oh, my heart aches for you! We had a scare ourselves not long ago. Our friend's illness turned out to be food poisoning, so he was fine by morning, but it was a very sleepless, anxiety-filled night before we got the reassuring news, and now we have ramped our caution levels back up to where they were when this thing started out.

I don't think I worry over-much about expressing my opinions, but I do censor the emotional delivery, because what would be my natural first response is often very ungenerous and, if I hope to keep dialogue open, counter-productive. Almost everyone, I think, feels beleaguered.

Both pandemics have dragged on a long time already, so it's no wonder people feel exhausted -- because along with the virus and the political divisions and the impending election (contested before it's even occurred), all the ordinary pains and griefs and challenges and difficulties of life keep happening, too. Not an easy time!

On a more positive note, my friend's husband who was hospitalized in Sao Paulo, Brazil, for two weeks with COVID made a full recovery, as did my friend from her somewhat milder case, and I will be hoping for the best for your family. Glad you have the comfort of Katie, too, that dear little dog girl!

My 'alert, light went on at the mention of 'Groundhog Day'. One of my
top five (and I'm no movie fan). If I run across it, even in mid play, I sit glued to the screen. Hilarious, but poignant-it just says something to me.
Not necessarily-
"Phil: "What would you do if you were stuck in one place and every day was exactly the same and nothing that you did mattered?" Ralph: "That about sums it up for me."
-it didn't matter, but Phil stuck with it grew in many wasy and finally the calendar flipped to Feb 3 and all was well with the world. Yay!

BB, I feel the SAME WAY about that movie! Whatever scene I walk in on, I have to stay for all the rest, no matter how often I've seen it. The very first time, about the fourth iteration of the repeating day, I thought, "Oh, no, this isn't going to work. They're going too far." But we were in a theatre and had paid admission, so we stayed, and as it went on, the day over and over but the character trying something different each time he lived the day, I was more and more delighted. By the way, I feel the same way about "Moonstruck" with Cher and Nicholas Cage and all the wonderful actors. Not one flaw that I can see in that movie. "It's temporary!" (the pinky ring) "EVERYTHING is temporary!"