Into the Spring with Darwin

…Our resting house was so dirty that I preferred sleeping outside; on these journeys the first night is generally very uncomfortable, because one is not accustomed to the tickling and biting of the fleas. I am sure, in the morning, there was not a space on my legs of the size of a shilling, which had not its little red mark where the flea had feasted.

- Charles Darwin, Voyage of the Beagle

All the way back from Arizona to Michigan and still now here at home, I have been reading Darwin, often reading pages aloud to David at bedtime and once, when traffic was at a standstill on 131N due to an accident up ahead, in the car (although in general on the road I prefer looking out the window to reading). Two or three people — all of them readers, too — have asked me if the book isn’t rather boring. Not at all!

Voyage was written for a general audience, not as a scientific treatise, and so while there are pages of detailed descriptions of shellfish or birds or geological features, there is also a great deal more, because Darwin, I have learned to my great delight, was interested in everything, and he was not above being amazed, a quality I find most endearing. (He often uses exclamation marks!) I think he would have been a wonderful traveling companion, nothing beneath his notice, his mind combing the ground at his feet and then leaping up and around to conjecture about the same ground in earlier ages. His thoughts would follow in general outline some of the conversations the Artist and I have as we travel, though naturally his thought would be much deeper and richer and more knowledgeable than ours.

Before getting into this book, I never realized what an incredibly active adventure Darwin had during the four years he was with the Beagle. Officially “with” the Beagle, that is, because although — and because — he was the scientist of the expedition, he spent much of his time on land, exploring pampas and jungles and mountains and shores while the Beagle was off mapping coastline contours. Sometimes on horseback, riding into the South American interior, and sometimes on foot, or even hands and knees, “scrambling,” as he put it, up mountains, Darwin’s work took him to all manner of land and society. He slept outdoors, on the beach, in tents, in the haciendas of the wealthiest and the hovels of the poorest.

The difficulties of his travels and work were not without a price, either. Following his return to England, he never traveled again and accomplished his great work (and married and fathered many children) despite a life of near-invalidism, probably brought on by Chagas’ disease, not diagnosed during his lifetime, but caused by a parasite related to the one that carries African sleeping sickness. It took an expert in tropical diseases from Hebrew University in Jerusalem in 1959 to review Darwin’s symptoms and argue against the prevailing opinion that the great scientist’s illness was psychosomatic.

What with his debilitating illness and his important work, however, I can’t imagine that Darwin had much time to worry about whether people thought he wasn’t really sick. He began to arrange his notes from the voyage in 1854 and finally published The Origin of Species in 1859. And apparently that more theoretical book did not strike people as “boring,” either: its first printing of 1250 copies sold out on the first day it appeared.

Darwin was in his early twenties when he sailed from England to South America, the Artist and I much older as we set out by car on the first of May for our return to Michigan. Our way was infinitely easier and more pleasant. Through the Gila National Forest in New Mexico on the first day, we traveled north from Socorro on the second, spending two days with a good friend in Santa Fe. Then it was a familiar route (although, truthfully, we saw much of it as if for the first time) across the panhandles of Texas and Oklahoma, a long diagonal through Kansas, a trek across Missouri, and another two-day stop with my sister and her husband in Springfield, Illinois, before Indiana led us to the Michigan border, through Kalamazoo, where we visited family, and finally north to home. We did not sleep outdoors once, and we suffered not a single bedbug bite anywhere! And still we arrived home exhausted — go figure! 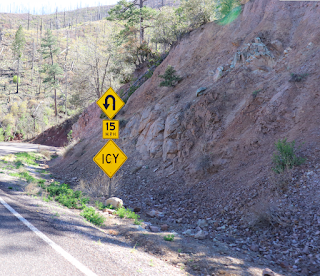 My notes are nowhere near as extensive as Darwin’s (nor was my voyage nearly as arduous), but on the perilous National Forest mountain road in New Mexico, that road of countless switchbacks and speed limits as low as 10 miles per hour in places, we were going slow enough that I had time to spot and write down some of the plant life. I recognized ponderosa pines and alligator juniper from our explorations in the Chiricahua and Dragoon Mountains of Cochise County, Arizona, and it was exciting to see the gifts of spring travel, big purple thistles and beautiful blue lupines in bloom.

Then in Santa Fe, redbuds were flowering everywhere. Often on cross-country travels I notice one particular thing from state to state. On one trip west it was hawks, everywhere hawks; on this trip east it was redbuds. I was interested to see the difference in their flowering time as we proceeded east and north. In Kansas and Missouri the blossoms were so faded and brown along the road that it took a sharp eye to spot them as redbuds at all. In Illinois they were not quite so far past their glory but were definitely eclipsed by flowering dogwood, both white and pink varieties, everywhere in bloom. Then we traveled back to early spring and found redbud in delicate perfection in southern Michigan.

The Artist and I share driving more than we used to, but he still often says, “I like to drive so you can look around.” I tell him I don’t drive with my eyes closed! But it’s true that the driver is not usually free to spot horses or pronghorn half a mile from the road, and it is my eye for botanical detail rather than his “Big Picture” landscape concern that keeps track of which particular plants are doing what as we speed along America’s highways.

We reached home on Friday afternoon. Forsythia in bloom by the doorway! My plum and apple trees, the cherry orchards around us not yet blossoming! We did not miss the spring! Grass was lush green but still a manageable height around our old farmhouse, and by late Saturday evening — oh, the long days of light this time of year! — a sprinkling of dandelion flowers had opened their cheery faces to the sky, sure sign that spring has come at last.

We spent the day on the summit, and I never enjoyed one more thoroughly. Chile, bounded by the Andes and the Pacific, was seen as in [sic] a map. The pleasure from the scenery, in itself beautiful, was heightened by the many reflections which arose from the mere view of the Campana range with its lesser parallel ones, and of the broad valley of Quillota directly intersecting them. Who can avoid wondering at the force which has upheaved these mountains, and even more so at the countless ages which it must have required, to have broken through, removed, and leveled whole masses of them?

I love to picture Darwin on that mountain peak, happy and excited, appreciating the beauty of his surroundings and lost in wonder at the forces of nature.

I feel closer to him, the Artist and I many times over the past months having had similar feelings in the mountains of the West and as we crossed the Great Plains and the great rivers of the interior of the North American continent. And now, having regained our northern Michigan nest, where we will be at home and at work for months to come, I like to imagine Darwin high on one of the nearby hills, looking off across the immensity of Lake Michigan, and once again pondering the ages it took to create our Great Lake in its present form. 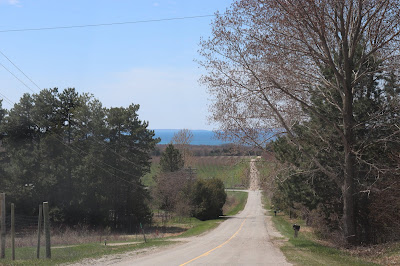 Because that would, of course, be one line of his thought. But not the only one! 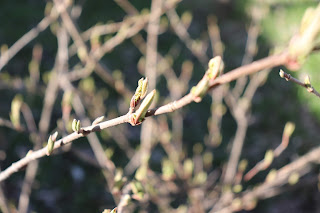 He would also note the cool air, the direction of the wind, the budding stage of the cherry trees, that faint red blush at the tops of a stand of distant maples, the hummingbirds that returned on schedule (May 10), a groundhog scurrying along down in a hollow, as well as preparations for the coming season being undertaken by farmers in the fields and merchants in the villages and anything else that might occur within his purview. I think he would love our northern Michigan wildflowers as much as I do.

At our age, it takes a while to recover from such a long trip. Quite frankly, it takes a little longer with each passing year. Arriving home at the same time spring is arriving means, for us, both the beginning of our heaviest work season and the beginning of the youngest time of the year. Vernal breezes and blossoms help the transition — make us glad to be alive and reward us for each task completed.

Having promised all winter that I would return “mid-May,” I will open Dog Ears Books officially for the 2019 season on Wednesday, May 15th. What a lot to do before then! And every day for months to come! See list of Thursday Evening Authors (every other week this summer) at right, and watch that right-hand column for further announcements as the season progresses.

Northern Michigan. Northport. Spring is here, and so are we.

My little hellebore is blooming. It's a little thing but means a lot to me. Every year I think I should plant more, but so far the one I have remains an only child. Perhaps I love it more for that reason? Could a vast array be more beautiful than this one little darling?

Welcome back. Ladt spring I traveled from south north, reexperiencing spring as I went. It is a lovely thing to do. Glad you didn't miss spring in Northport.