Piecing Together the Past 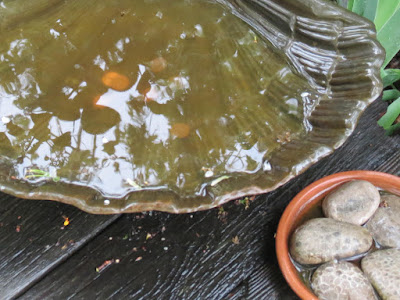 After a week of balmy summer, Nature today has carried us back to spring with a second wet morning in a row, this one cool enough for a jacket, though sweater and raincoat may be more appropriate. Yes, rain. Rain means a break from mowing grass — and also encourages the grass to grow all the more lushly. Everything is a double-edged sword. 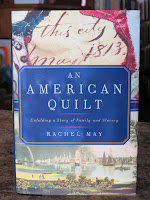 Yesterday morning I came to the last page of Rachel May’s An American Quilt: Unfolding a Story of Family and Slavery, and today I feel challenged to get across to male readers, many of whom will have little or no interest in domestic arts (am I stereotyping?), that this is not just a “book about quilts.” It is much more. Though there is plenty of information about quilts and several other examples of quilts made in the early years of the Republic, for author May the 200-year-old quilt tops encountered in the book’s pages are pieces of material culture that first open the door to decades of American history in which she will subsequently immerse herself and her readers. What May pieces together in her book are lives.

But here I want to go in another direction for a while, because May will be the best narrator of her own story and I don’t want to pre-empt anyone’s reading and listening of that. Also, my digression has a definite purpose, connected to May's book, so once again I ask you go come with me on a little detour.

Old books. Some people have no use for them, especially old history books, but for me the age of a book, the era in which it was written, is never a reason to pass by without opening the pages. “Outdated” is not a term I usually  recognize. Many of today’s perspectives will surely be discarded in the future, so why should we necessarily valorize them over other views, merely because they are current? For me, the calendar cannot be a yardstick for value. And just as some past views require correction in the present and will require additional correction in the future, surely other perspectives of the past may be resuscitated and one day seen as superior to what is commonly believed today. It has happened before, and it will happen again. 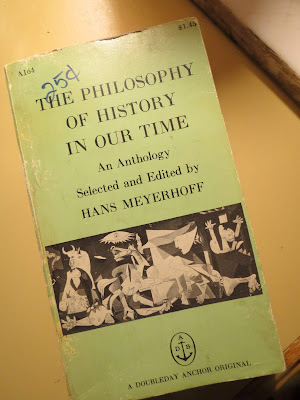 The “old” book I picked up yesterday afternoon — actually, I initially picked it up months ago and have had it tucked away in the car for an occasion that finally arrived yesterday, an hour when I would be waiting in the car for the Artist and would need something to read — is a book of essays on the philosophy of history, essays gathered together and published in 1959. It is The Philosophy of History in Our Time: An Anthology, selected and edited by Hans Meyerhoff, and in the parking lot of the Suttons Bay library as afternoon segued into evening I had the opportunity to dip into the first essay in the collection to catch my eye, “The Historical Imagination,” by R. G. Collingwood.

Revisionist history. There is another phrase used as one of depreciation and often uttered with a sneer. The common connotation, nurtured by many who consider themselves lovers — even practitioners — of history, is that to revise history is to falsify it. And of course intentional falsifications have occurred from time to time. But not every revision is a distortion. I would venture to say that most revisions are corrections and clarifications rather than distortions, and here Collingwood comes to my aid, as well as serving to bolster the work of Rachel May, which is the reason for my digression today.

Collingwood begins by setting forth what he believes is most people’s first “commonsense” theory of history, in which the essential features are memory and authority. According to this view, an authority is someone with memory of an event, and subsequent historians remain true insofar as they rely on facts set forth by authorities. Collingwood challenges this view and insists on the historian’s autonomy, that he or she (for Collingwood, always “he,” but no matter) must always be his or her own authority.

As natural science finds its proper method when the scientist, in Bacon’s metaphor, puts Nature to the question, tortures her by experiment in order to wring from her answers to his own questions, so history finds its proper method when the historical puts his authorities in the witness-box, and by cross-questioning extorts from them information which in their original statements they have withheld, either because they did not wish to give it or because they did not possess it.

So much for authority, although I am not giving you every step or every example in Collingwood’s refutation. What about memory? Will that not be essential?

What, though, about facts? The question of facts, which seemed more or less settled to the commonsense imagination, has once again become contentious, and Collingwood insists that for the historian facts about the past are always contentious, that there are no “bare facts” that can serve as fixed points on which to pin a complete history. No authorities, no fixed points, no data.

Another philosopher of history in the same old book, Carl Becker, addresses himself to the question of historical facts and takes as his example that Caesar crossed the Rubicon. What of it? he asks. Many people have crossed rivers, many even have undoubtedly crossed the Rubicon, and certainly in saying “Caesar” crossed it we mean that he did so with an army, and when we look at this “simple fact” closely, we see that thousands of other facts must have gone into it and have been left out of the story. Historians are always selecting and omitting.

All that the historian means, when he describes certain historical facts as his data, is that for the purposes of a particular piece of work there are certain historical problems relevant to that work which for the present he proposes to treat as settled; though, if they are settled, it is only because historical thinking has settled them in the past, and they remain settled only until he or some one else decides to reopen them.

In the end, Collingwood comes to a coherence theory of historical truth. Any historian will be selecting among bits of evidence to construct a story, but that story cannot be “arbitrary or merely fanciful,” although it will be “essentially something imagined” in the gaps between what is known, and here the work of the imagination is structural, not merely ornamental. Like a novel, history but “make sense.” It must present a “continuous and coherent picture.” But unlike the novel, “the historian’s picture is meant to be true,” and this truth demands that the picture be localized in space and time; consistent with itself; and stand “in a peculiar relation to something called evidence.” Collingwood having rejected authorities and fixed points, i.e., bare facts, you will not be surprised to learn that his attitude toward evidence is not a simple one

Everything is evidence which the historian can use as evidence. [Emphasis added]

I have italicized that sentence and left it standing alone because for me it shines light on Rachel May’s imaginative reconstruction of nineteenth-century lives, both black and white, beginning with an unfinished quilt. Collingwood goes on.

Everything is evidence which the historian can use as evidence. But what can he so use? I must be something here and now perceptible to him: this written page, this spoken utterance, this building, this finger-print. And of all the things perceptible to him there is not one which he might not conceivably use as evidence on some question, if he came to it with the right question in mind.

I read: This quilt. This box of letters. These printed images. These houses and the much more simple buildings behind them. Historical markers in certain places, their absence in others.

History is never finished, once and for all, writes Collingwood, but this is not an argument for skepticism.  History is a process, and the historian is part of that process.

[E]very new generation must rewrite history in its own way; every new historian, not content with giving new answers to old questions, must revise the questions themselves….

And here is the heart of important revision, it seems to me. “Settled” history, that which we learn in grade school, answers a limited set of questions, but as we grow older we realize how many questions were never asked in those books. Could New Englanders have become so wealthy with their cotton mills if not for cheap raw material from the South, its very cheapness made possible only by the institution of slavery? What picture does the word “slave” bring to mind? How might it be possible to give a fuller picture not only of national economics in the nineteenth century but also of individual human lives? How can we possibly imagine what might have been going on in the minds of those who could see other human beings as property, in the minds of those who were considered little more than livestock or chattel?

Much necessary historical revision is enlargement. It looks to answer questions that previous historians did not ask (or dismissed from consideration), and it looks to give voice to what has hitherto been kept silent. It is not suppression of truth but the bringing to light of more truth than had been made easily available before.

What historical facts will you accept? What answers?  What stories? Each of us who reads history is a student of it, and the more we read and learn, the more critically we can assess what we read, by putting it in the witness-box of our own imaginations and cross-questioning it.

Here’s why it matters. Another phrase from Collingwood stood out for me:

Every present has a past of its own….

It is this truth, in part, that drives Rachel May’s investigations. Just as she asked about Southern slave-owners, how they could come to a comfortable acceptance of owning other human beings, so she also asks of our time, how did we come to be where we are today? What questions have we failed to ask ourselves? What are we not seeing, and whose voices are we not hearing, whether willfully or ignorantly?

Rachel May will be my first Thursday Evening Author, presenting her story of historical reconstruction at Dog Ears Books on June 21, beginning at 7 p.m. She is, I should add for the reassurance of crafters, a serious quilter herself and a student of historical patterns and methods of quilting, as well as a researcher of documents and places, so she will have something to offer every member of the audience, and I hope the audience for her presentation will be numerous.