“It’s Complicated” Is Putting It Mildly

I’ve been trying for nearly a decade -- and lots of people have been at it longer, I realize -- to figure out what a fair and just and reasonable and feasible U.S. immigration policy would look like. I’ve read a few books, listened to other people, heard opinions from fellow citizens and political representatives, and my questions remain. Now, after three months near the border, I am no closer to an answer but have a much deeper appreciation for the myriad issues involved. Employment, social stability, poverty, language, history, geography, changing political and economic policies and realities across time, artificial nation boundaries, ranching, families established on both sides – the more I’ve learned, the farther I am from a simple answer, and while it may seem that’s going in the wrong direction, I’m convinced that anyone with a simple answer has got it wrong. It is not simple. Period.

In Willcox, Arizona, the closest real town (not ghost town) to where we spent the winter, the population is about evenly divided, Anglo/Hispanic. All over town, people of all ages switch between English and Spanish with nary a moment’s hesitation. The public library has a very large Spanish-language section of books. But Willcox is clearly not a Mexican town. As far as it is from the fence and wall, however, it’s still a border town. Tucson is a border town. The borderland, la frontera, is a “country” all its own. The Sonoran-style hot dog, for example, is not a Mexican or an American food but a border food. That’s a tiny, trivial example but was my first clue about the land in which we found ourselves for three months. 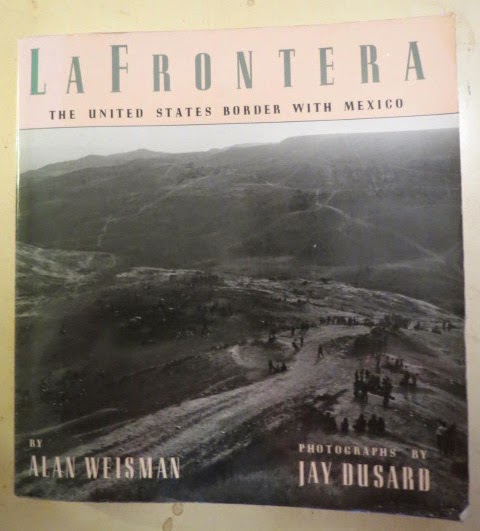 At a wonderful little bookstore in Benson, Arizona, the overly modestly named Paperback Recycler (which was so much more and which, sadly, is going out of business this spring, the owner retiring without having found a buyer for her business), I found a book that shed many different lights on the many border issues. The entire story is so complicated that I will not even try to summarize it. To do so would be a huge distortion. I am willing, however, to rent out my copy of La Frontera: The United States Border with Mexico, by Alan Weisman, with photographs by Jay Dusard, to customers who would like to borrow it for a week. The border, wider than you might imagine, is a world well worth exploring.

Publication date on this book is 1986, but without an available update readers will find La Frontera a valuable introduction to the area, the populations, and the issues. I only wish I’d known about the book a year ago when Trinity Congregational in Northport chose migrant workers and immigration for its annual reading and lecture program.

Never traveled to the Southwest? Michigan comes into the story, too:

It started with strawberries in Constantine, Michigan. They would buy fresh milk from farmers and walk four miles to town to see a show. Next was Leelanau Lake [sic], near Traverse City. The sun above the strawberry fields had been so hot; here they sat on ladders, in the shade of cherry trees. In the evenings they watched movies outside, projected on the white wall of a church. The harvest ended. Back to Constantine for the pickles. In neighboring White Pigeon, there was a pickle factory.

...Their next stop was Lake Odessa, where they strained over short hoes for the sugar beets....

A stop at NJ’s Grocery in Lake Leelanau on Thursday carried me back to Arizona, as the cashier switched effortlessly between English and Spanish, just as almost everyone did down in Willcox, Arizona. That made me happy. We are connected to the larger world, even here in this quiet rural place, and it’s important to learn as much as we can about it. I'll only add that La Frontera is beautifully written and contains, along with evocative descriptions of towns, families, and borderland terrain, many stories from history that only a handful of Americans will ever have heard before. And then there are the photographs. You can travel off the beaten path without leaving your easy chair.

P.S. Switching topics: I will have some very, very exciting new titles this spring and summer at Dog Ears Books and am eager to introduce you to them. Swing by on Saturday if you have a chance and if a degree of disorder doesn't frighten you. I'll be there, busily preparing for the season ahead.

The bookshop will, however, be closed on Memorial Day weekend. Unthinkable! I know. But we have a grandson getting married downstate, and that's not an event we want to miss. Regular summer hours will begin after that, never fear!

True it's very complicated. And it's more than just the border, as you know. It wasn't something I felt involved me until my brother fell in love with an illegal. They were married a year ago yesterday, and today she has a green card. But her children, some here, some there are still in limbo. Complicated.

Thanks, Pamela. This was really interesting. I hadn't thought of the border towns as having separate cultures of their own. Immigration is such a complicated issue that I wonder if our political system will ever be able to move forward on some decisions.

Dawn, it's all closer to home than most of us realize. I've been trying to figure out what direction I even want our political system to take and am still searching for an answer.

Karen, there will be a presentation this Wednesday evening at the government center on migrant workers in northern Michigan. Refreshments at 6:30, program at 7 p.m. Contact Vina M. if you want more details. I'll be there. Hope to see you.