Point, Place, and Parade (One of Each) 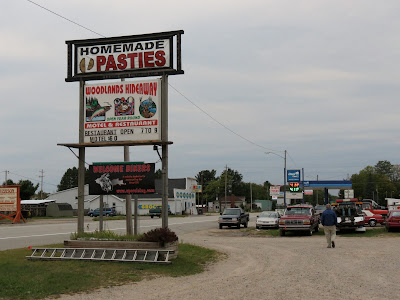 This is the third and will be the last installment of my 2012 vacation chronicles. (What is that sound? A collective sigh of relief?) Do you remember the definition of a geometrical point? It has location but does not take up space, as I recall. Some very small towns on two-lane highways feel almost like points rather than places, as if you could be at a named point without being in an actual place, because the town itself seems to take up no space. Obviously, that’s an exaggeration, since the smallest country store or post office or gas station covers a certain amount of surface area, but you know what I mean, right? 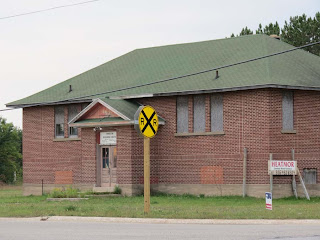 And yet the geographical town I’m calling a point has, in addition to surface area on the earth, a historical past, as is evident to anyone with eyes open. This old former school building did not pop up overnight. Besides, any town on the old railroad, lying not far south of the forested Lake Superior shore, would have been a lively place a hundred years ago. 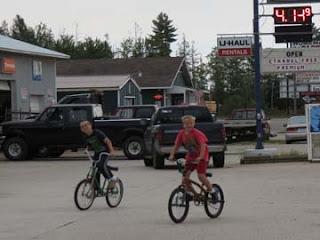 Even these days, Shingleton, Michigan, is lively in its own small way. There are families at work in their gardens, young people on bicycles, and chickens in backyards. The automotive repair shop (which we came to know well this year) does an extremely good business (and good work, too). 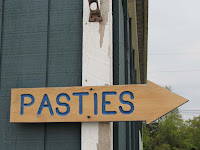 There’s a restaurant where you can relax with a hot pasty or a full dinner while your vehicle is being worked on. An interesting Up North feature of the restaurant is what I learned years ago to call a “Russian” heating system: wood is burned a furnace some distance from building and ducted in underground. To my mind, this is a very attractive method of heating with wood, as the danger of fire and the smoke smell are pretty much eliminated from the building you want to heat. In this case, it was also pointed out to me that since the wood furnace also heats all the restaurant’s water, not having the heating system in the restaurant means not adding unnecessary heat—restaurant kitchens get hot enough--to the building in summer. 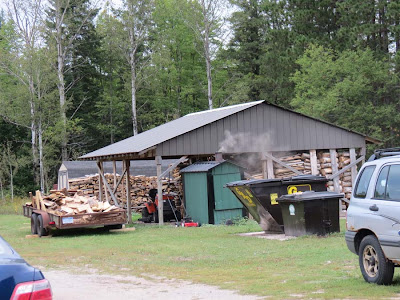 Marquette, home of Northern Michigan University, is a town in another league altogether. It is the Ann Arbor of the Upper Peninsula, the amenities of sophisticated urban life housed in old historic buildings. For me, no trip to Marquette would be complete without a visit to Snowbound Books. Coming back to our designated rendez-vous spot, I shot a few architecture photographs, never guessing that David was watching me from a bay window above the old movie theatre. Wonder what the future of that theatre building will be. 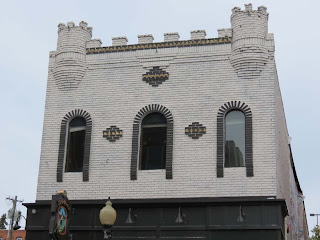 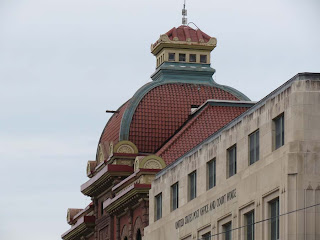 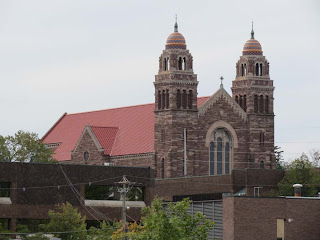 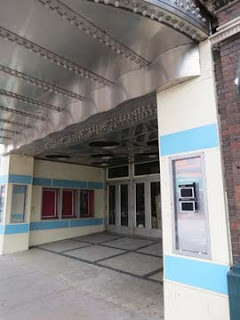 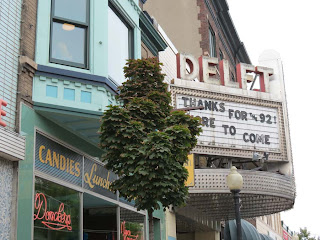 One year we made our return trip from vacation on a Sunday and happened on the last of the big semi-trailer trucks on display along the main street of St. Ignace. We were too early to see most of the big trucks this year, but when we detoured into the downtown for lunch at Bentley’s Cafe we were surprised—and I was delighted beyond measure—to happen on a long, long parade of “antique” farm tractors. 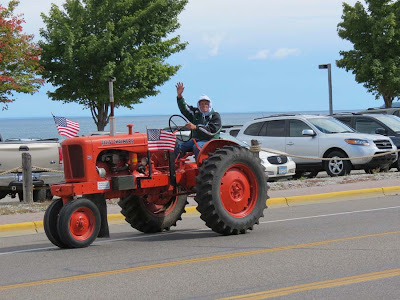 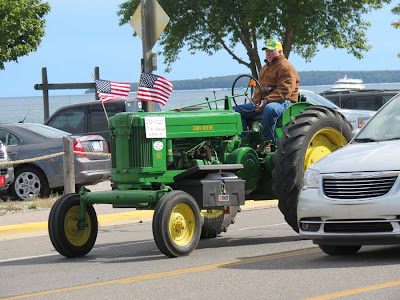 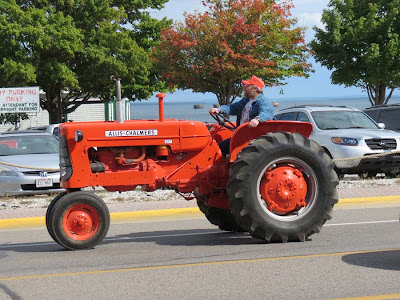 I used scare quotes above because only a small percentage of the tractors appeared “antique” to my eyes—something to do with my age? Still, all major American makes were represented, and the parade (which, oddly, was taking place in a distracting manner alongside normal road traffic) went on and on and on. After escaping traffic and parking the truck, we scored the window table at Bentley’s and had a ringside seat for the rest of the long parade.

What more could a returning pair of vacationers ask? Memorably delicious sandwiches (I highly recommend the B-n-N whitefish) with hot, crispy potato chips thinner than any I’ve ever had before in my life, and, under a sunny, blue sky over the Straits of Mackinac, a parade of tractors! The scene could only have been improved if (1) there had been only tractors and no cars going by; and (2) if there had been a few horses in the parade. But those are only observations, not complaints.

Maybe "near-perfect" makes for the best souvenirs, life presenting itself directly rather than being represented in ideal (and therefore unrealistic) form.  A tractor parade was certainly a welcome change from personal automotive crisis. 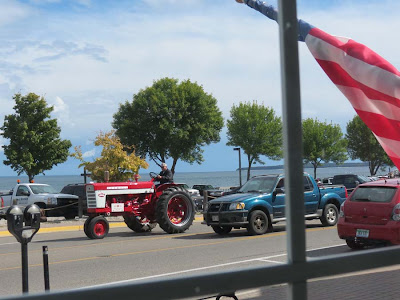 And now it's back to the books!

Awww this was nice. Photos and the words...took me back to a simpler time in my life. Even before living up north when I would visit my mother's farm. Love the tractors...:)

Is dyslexia contagious? I came back to respond to Dawn's comment and saw that I'd typed "town itself seems to take up on space" rather than (as I meant) "no space."

Dawn, I love the tractors, too.

I've really enjoyed your UP vacation posts. Thanks so much too for the calendar plug. I appreciate that! Karen

Good morning, Karen. I meant to send you a link so you'd see the calendar note, but you found it on your own. Good! The rest of you, stop in and see what Karen has prepared to accompany us through the next calendar year. It's gorgeous!