Wandering Through the Canadian Wilderness

Cinnamon! She opened the little glass jar of powder, held it to her nose, and breathed in the deep, almost ecclesiastical perfume. She was suddenly in her father’s house, in the kitchen, following the old cook around while she worked, sitting on the counter by the sink licking a spatula thinly covered in gingerbread batter. She remembered flour sifted into a wide ceramic bowl in perfect peaks, salt and sugar denting the summit, and finally a tiny spoonful of cinnamon dropped in, a small thrill among the whiteness.

A reader is many chapters into The Outlander before learning Mary’s name, long after learning — though all this not immediately revealed, either — that she has killed her husband, lost an infant, and is being tracked through forests and over mountains by her husband’s twin brothers. Functionally illiterate but raised in a genteel household with servants, Mary could not have found life easy in her husband’s dark, windowless, isolated log cabin, far off in the Canadian wilderness, away from everything she had ever known. But her grandmother’s object was achieved by the marriage of the young, motherless girl to an older man: the girl was spared the horrors of "spinsterhood."

With a well-worn, familiar Bible but no money and no change of clothes, Mary is running away, seeking to cross a river by ferry, pursued by a pair of red-headed identical twins when first we meet her. She is wearing an oddly put-together costume of black supposed to serve as mourning. Only now that I am halfway through the book, after chapters of the protagonist's stumbling through snowy woods and almost dying of starvation, has she find refuge with a widowed minister in a mining camp. She has a real bed to sleep in again at last.

Along the way, however, she had already been rescued three times, first by an old lady famous for taking in needy strays. When "the widow," as Mary is simply called in the early chapters, flees the old lady’s house, she makes off with a horse, an elaborate pipe, and enough good tobacco to last a while.

Her second rescuer in the mountains is called by authorities the Ridgerunner. The Ridgerunner is a man who lives by his wits and by stealing food and whatever else he needed from Forest Service cabins. Captured, tried, and acquitted once in a court of law, he returned to his old life and tells Mary with a laugh, “They probably think I’m dead by now.” With William, she discovers laughter and passion, but the Ridgerunner has been alone too long to take her on as a permanent companion, and one day he simply vanishes, taking all his gear with him. The widow is once more on her own.

The third person (second man) who comes to her assistance is Henry, a Crow Indian, and it is Henry who delivers her to the Reverend. Henry’s wife warns Mary that the Reverend Bonnycastle is the only man in the mining camp she should trust, and Mary finds the minister's character to be everything promised. But the red-haired twins have hired a tracker and are close on her heels.

-- What will happen next? I was happy to reach the pleasant, cozy cinnamon-in-kitchen interlude on Sunday morning at home while enjoying my first cup of coffee with delicious cinnamon bread baked by a friend. Outside a new blizzard raged. We would not be taking to the road as planned....

Early chapters of The Outlander, as I’ve indicated, were all set outdoors, and the author’s attention to sensual detail is beautiful and vivid on every page.

She left her belongings and wandered aimlessly. Spider webs brushed her face and she did not wipe them away but let spiders climb to her and ride a while and drop away. The sun came down in beams and shafts, and once, when she looked up, she saw the moon hung high and pale in the blue morning. Tricky thing, pretending to be gone when it wasn’t. She was reduced to an idiot child lost in the woods. It was with an idiot’s glee, then, that she came across the tracks of her horse, and bent to see the deep, scored prints where the animal had run and dodged and dodged again. Other horses had run with it and diverged through the trees, hounded by dogs. Not dogs, she reminded herself. Many wolves, harrying the horses.

The widow followed the tracks and came across a carcass. It was a big mule deer. The body lay with its hooves toward her. From ten yards away she could see blood pooling in paw prints in the mud, the throat and belly torn away, intestines dragged over the ground. One leg askew.

Hungry wolves want that deer meat, but so does the hungry young woman alone on the mountain! 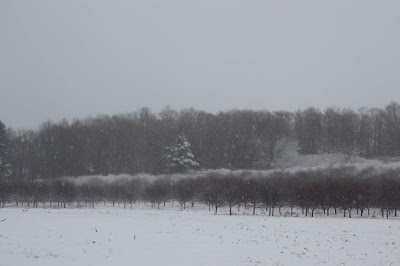 When a friend and I discussed Moon of the Crusted Snow the other day, she expressed disappointment that the story was so short on detail and left so much to the imagination. I had rather appreciated the author’s spare, light touch, but I understood what my friend was saying, especially when she told me she wanted to know, “What were the women doing?” Ah, yes, good question! The first scene in the Rice novel shows us an Anishnaabe hunter who tracks, kills, and butchers his moose, and he has learned from his father how to tan hides, but we do not see how women transform hides into clothing or harvest rice together or do any of the work that would have been so crucial to survival after the power grid goes dark. Their contributions are referred to only in passing.

In The Outlander (I’m not sure yet that the title refers to the protagonist; that remains to be seen), we see everything that the woman does. She is the character in focus, and as the year is 1903 and she is fleeing alone on foot through mountain wilderness, survival is of paramount importance in this novel, as well. But “the widow” has no survival skills and would have been dead several times over were it not for the rescuers she meets along her way, so while there is much detail given of her travails and much of the beautiful country she passes through, Mary is hardly a model for ancient knowledge, and this lone white woman is also very much without community.

I enjoyed Moon of the Crusted Snow — devoured it! — and am also fascinated by the Gil Adamson’s Canadian story, The Outlander. I think of how Bonnie Jo Campbell’s Once Upon a River was compared by many reviewers to Huckleberry Finn, Campbell offering a female version of running away downriver.

What my friend wants, though, is something different from all of these books, if I have her criticisms right (and maybe she will tell me if I don’t): She wants a story of Anishnaabe post-apocalyptic survival that stresses community aspects and particularly the contributions made by women in the group. What kinds of traditional knowledge of nature would be crucial if the lights went out and there were no more grocery stores? How would clothing be replaced, food prepared, sicknesses treated? Knowing how these aspects of life were carried on in the traditional past would be part of survival into a future if one truly had to live off the land.

If a novel telling such a story were to come out of Peshawbestown, I would read it eagerly! For today, I'm content to be snowed in again, preparing for eventual departure in leisurely fashion. The Artist and I needed a day of rest before beginning our travels. 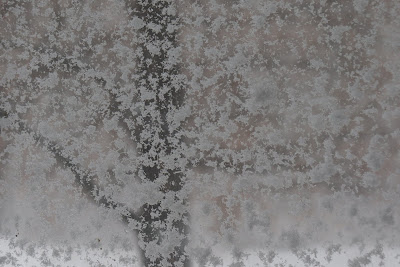 Definitely not a day to travel. That will come soon enough. Meanwhile enjoy being tucked in warm and safe with a dog, a husband and a good book.

Definitely! Though I also managed to do enough housework, plus breaking trails through deep snow with Sarah, that I'm very tired now this evening. Glad not to have spent the day on the road.