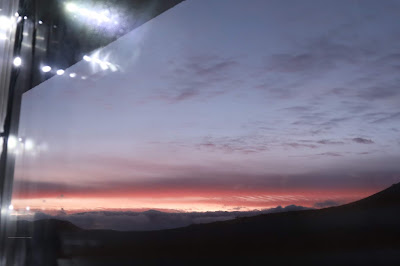 Contrary to the mournful western ballads, coyotes seldom howl; rather they emit variously pitched yaps and yips, so that a single coyote has the knack of sounding like several. They are especially vocal during bright moonlight nights, though sometimes we hear them in the late afternoon and early morning. Their shrill, excited clamor electrifyingly animates the desert, bringing indoors a sense of its tingling wildness. It is an eerie sound, which turns the night into a restless and precarious place and sharpens one’s feeling of safety behind closed doors. - Ann Woodin, Home Is the Desert

Back in January of 2015, almost five years ago, on our first night in a rented ghost town cabin in the high desert of southeast Arizona, we heard coyotes, and the sound, so like night sounds around our old northern Michigan farmhouse, made us feel right at home. There in the dark of a strange, new place, we smiled to hear coyotes.

Much, much, much less welcome is the sound of one or more javelinas! Probably not really bent on mischief (as it certainly seems!), javelinas combine large size, very poor eyesight, and long tusks with terrifying voices, so when they come foraging in the middle of the night for whatever they can find — we have no garden for them, but once they managed to get into the shed where we keep our garbage, pushing open the metal doors we had unwisely (a mistake never repeated) left unlocked — the noise they make is blood-curdling. Give me coyotes any night! So far this winter, the season barely underway, we have had only a single javelina come calling, and it clattered and stumbled away in haste when met by the Artist’s yells to “Get out of here!”

Last year we heard no coyotes and were uneasy. Had they moved away? Been killed? Ann Wooden wrote in 1964 that while the coyote was

… still considered a pest by the chicken farmer and the sheepman, … most ranchers are now beginning to realize that coyotes are beneficial, keeping the rabbit and rodent population under control, and the wiser of them encourage the coyote rather than shoot him.

One of our neighbors speculates that coyotes become quieter when they realize that “singing isn't workin' for 'em.” We have always thought the chorus came after the kill, rather than before, but whatever the timing, our wild canine neighbors are back again in full voice this year, and we are happy to hear them. We hear them in the evening, in the night, before sunrise, and sometimes, less often, during daylight hours. 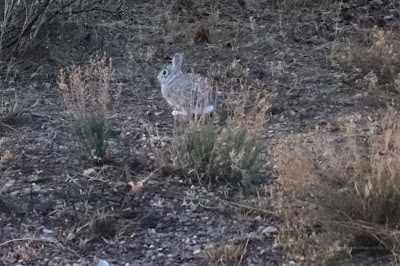 Cottontail rabbits no doubt have different feelings when coyotes sing, but even with all the coyote chorus performances, there still seem to be plenty of rabbits around. And now, on Christmas Day, after a rainy Christmas Eve day, the sun is back. Yesterday’s rain on the high desert was snow at higher elevations. Our mountain was snow-covered, though I have photographs only on my phone, as camera battery needed recharging. 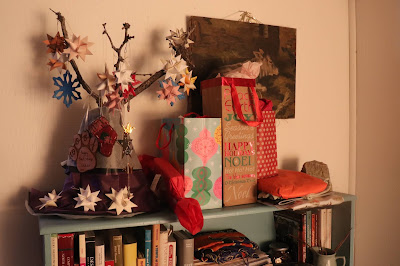 We have heard the grunts or snorts of Javelina, but usually smell them first. My friends told me that the coyote yipping is most vociferous after a kill. I worry for our small dogs. Keep reproducing bunnies, so there is plenty of food for the coyotes.

Ooh, javelina SMELL?! I don't even like the SOUND of that!

It all sounds wonderful. I only get nervous heaing them sing when I'm camping in an empty campground. We hear them here quite regularly.

We hear them all the time in Leelanau County and have been hearing them again regularly this year in Cochise County. As I say, I find the sound reassuring. It is the sound of home to me.