The Twisting Road of History

We have arrived at last! We were six days on the road, rather than the usual five, owing to an unexpected, migraine-motivated, two-night stay in Alamagordo, New Mexico. (We had also stayed two nights in Springfield, Illinois, but that was planned and enjoyable.) We were able to make the last leg of our cross-country journey on Tuesday, however, and it was an easy drive on a clear, sunny day. My heart leaped up when I spotted the twin peaks of Dos Cabezas as we crossed the state line from New Mexico into Arizona, and later on, everything in the car dragged into the cabin, as we prepared to hit the road once again, briefly to stock up at the grocery store in Willcox, we were both thrilled to see the moon rising gloriously over the mountains. 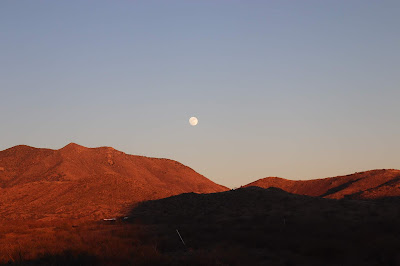 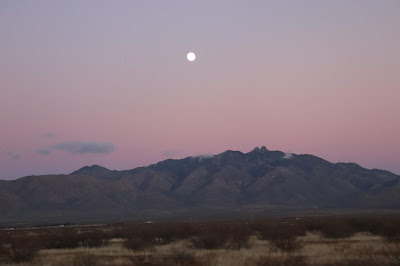 For me, the drive from central Illinois to southeast Arizona presents not only challenges of the road and beautiful scenery and whatever surprises we encounter in towns we visit along the way — it’s also puts front and center in my mind the history of our country. For instance: we see enormous bales of cotton (size and shape of the large round hay bales sometimes seen back in Michigan), and I wonder how it was that the growing of cotton moved west to Kansas and Oklahoma and Texas and even as far as Arizona and how much of that crop’s westward migration story is tied to the larger story of slavery and the Civil War and the migrations of Southerners to the West and Southwest and when the growing of cotton on former buffalo lands came about and how it affected the lives of the Plains Indians. A bit of searching on my phone delivers a fact that surprises me: that the Choctaw began planting cotton in 1825. Unsurprisingly, cotton's history in the second half of the nineteenth century was complicated, to put it mildly. If you're interested, the link is there to follow and read more. 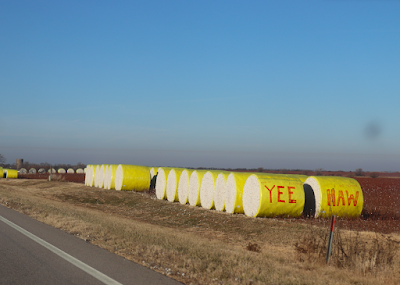 But every mile of the road is saturated with history and the effects of history’s unrolling on the present. Cities are booming, in the Great Plains as elsewhere (we avoided cities as much as possible so as not to deal with the traffic), but across the country the pain of nearly forgotten small towns is palpable. On the two-lane roads we travel -- sometimes detouring a bit off the road to find what is called hopefully a business district -- we see towns where beautiful old buildings stand empty of commerce, wide streets empty of traffic, towns with not a soul on the sidewalks. The scene is the town correlate of the abandoned and derelict farmhouse, an empty house falling into ruins among sheltering trees as cattle graze up to the edge of the front porch, farms having grown larger and larger although country cemeteries tell of larger populations in times past. 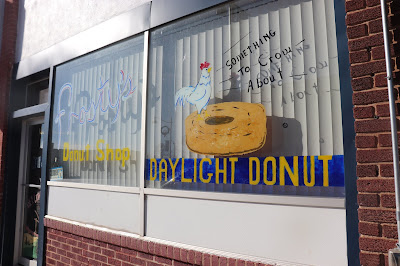 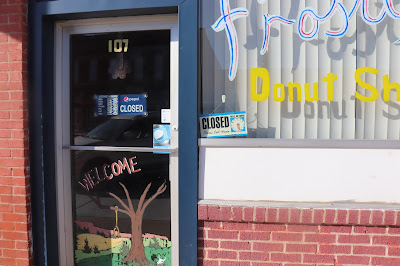 We detoured off the road Saturday morning to explore one formerly prosperous Kansas town and admired beautiful brick streets and buildings in our search for breakfast but were unable to find a single place open for business. We fared better down the road in Medicine Lodge, another town of brick streets. The “Welcome” sign on Frosty’s Donut Shop was contradicted by a “Closed” sign on the same door, but down the block a few doors we found an open cafe. (I neglected to photograph the front of the business but think I recall its name as Latte-Da.) Fancy European coffees have penetrated the heartland! We stuck with straight American brew, fresh and dark and delicious. The sweet white china cups were so much more luxurious than mugs and light years better than gas station styrofoam! Avocado toast, my menu choice, came to the table topped with cheese and a fried egg and was a breakfast worth the wait and the search that had led us to Medicine Lodge. 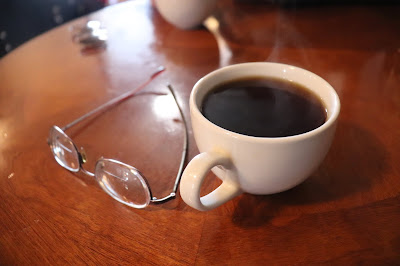 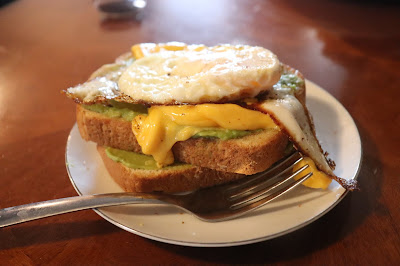 Medicine Lodge calls hard on history for recognition. Along with being the one-time home of temperance agitator Carrie Nation (there is an oxymoron for you: temperance agitator), it was also the scene of 1867 Medicine Lodge Treaty between the U.S. government and “more than 5,000 representatives of the Kiowa, Comanche, Arapaho and Kiowa-Apache nations,” joined soon by members of the Southern Cheyenne. The town of Medicine Lodge celebrates the colorful treaty gathering annually, despite its short-lived success.

…[C]ontinual attempts to renege on the 1867 Medicine Lodge Treaty came to a head in 1903 in the landmark Lone Wolf v. Hitchcock case, in which a member of the Kiowa nation filed charges against the Secretary of the Interior. The Supreme Court ruled that Congress had the right to break or rewrite treaties between the United States and Native American tribes however the lawmakers saw fit [my emphasis added], essentially stripping the treaties of their power.

Read more at this site from which my quote is drawn. 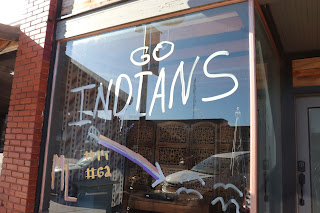 Visual support for the local high school team on one store window aroused my curiosity, and I looked up the town on City Data, an online site that helps me see beneath appearances, where the report (this would be from the 2010 census) told me that the Native American population of Medicine Lodge, Kansas, is 0.00%. But history is what the town has, and it’s clear they are struggling to hold onto some kind of identity.  When a young woman with a hauntingly plaintive country voice sang “I’ll Be Home for Christmas” in the little cafe, our feelings for the place and its people were warm, and we wished everyone well as we said goodby. I remember struggling years in Northport, Michigan, and can’t help being sympathetic to other small towns fighting an Interstate highway system, flight to cities, and online shopping. As for the burden of history, it is one none of us can escape. All we can choose is how we will go on from where we are. 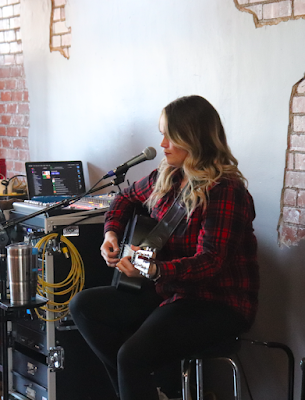 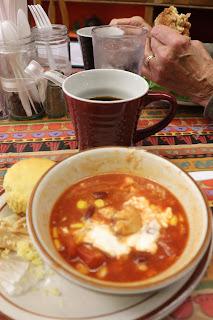 I won't try to give a day-by-day or mile-by-mile or even road-by-road account of this year’s trip west but will skip now from Kansas to New Mexico, where our last stop on our last day of travel was in the town of Deming. Remembering a very pleasant visit to a little bookstore called Readers' Cove in December 2018, I had been looking forward to stopping there again this year. First, however, we sought out a downtown cafe — and again, as in Medicine Lodge, fortune smiled on us. “Rise and Shine” was drawing in others besides ourselves for their gourmet coffee, but we took a table and made it a lunch stop, as well. Then on to Readers' Cove. 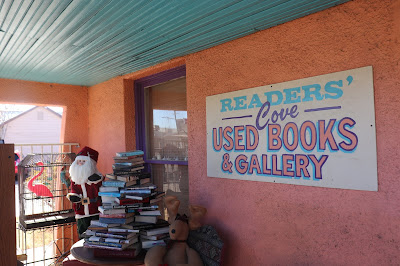 Margaret was still there, the little dog, the cat (I was told there is more than one cat on the premises), and again I found enough books to carry off a little stack, although we did not tarry as long this year, eager as we were to reach our ghost town destination. 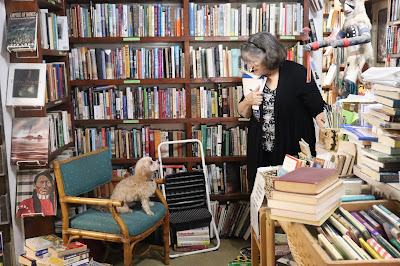 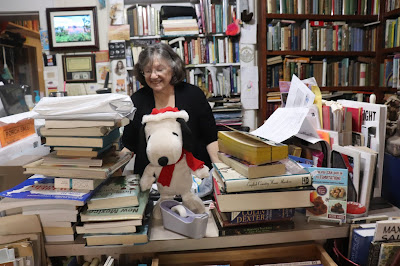 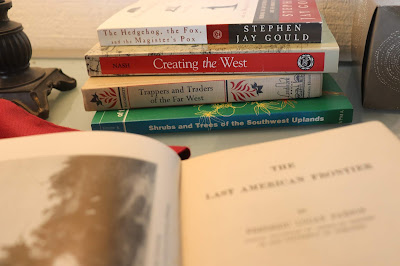 … And then there it was, finally coming into sight a bit farther down the road (I-10 now), the twin peaks of Dos Cabezas visible from the New Mexico/Arizona state line. (See back to my top photo of today's post, if you've forgotten.) I was so happy to see my mountains again! We took the first of the three exits to Willcox, so as to enter past the livestock auction grounds and the old town along the railroad. Later, having unpacked at the cabin and returned to Willcox for the shopping expedition, we saw the old town strip after dark, beautifully lit up for the holidays — a photo op that must wait for another evening, however, as road weariness was overcoming us. And so, home and to bed, with a short spell of reading aloud, and then to sleep, at last, in our winter ghost town stomping grounds.

Until a high desert dawn brought another day, much calmer and more relaxed than the week past has been. I note today the birthday of Michigan, Montana, and Arizona writer and our good friend, the late Jim Harrison. Here's to you, Jim! You got your work and paid your rent in the universe!

Glad to see you’ve arrived safely, and love the stories and photos!