Halfway Through Yet Another August 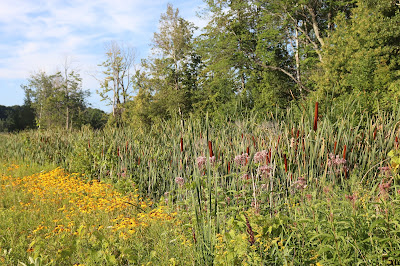 Goldenrod is bright along the roadside, and Joe-Pye weed’s soft, subtle mauve accompanies firm brown cattails in ditches and along streams. The air is soft and clear after recent rains, sky bright, as September smuggles itself into August on the breeze. The seasons are changing in the way that they do, gradually, back and forth, not marching lockstep as the calendar so unreliably suggests. Autumn is coming. 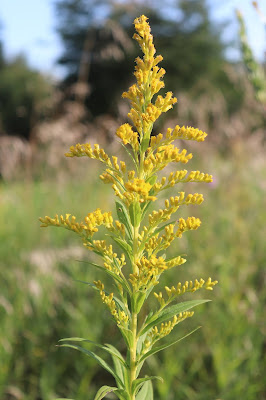 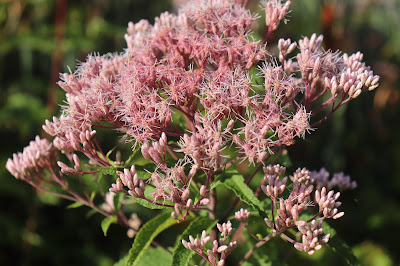 And we have lost another old friend. The last time I saw him, not much more than a week ago, we hugged and cried and yes, finally, laughed together on the sidewalk outside the post office. He wondered how he would be able to carry on without his dear wife, who had died so recently. “My heart hurts,” he said, pressing his hand to his chest. When he and the Artist visited (both of them painters), our friend was planning a getaway to the U.P. with easels and brushes. And now he and his wife are  both gone from us, almost together, the two deaths only weeks apart (July 22 and August 14). 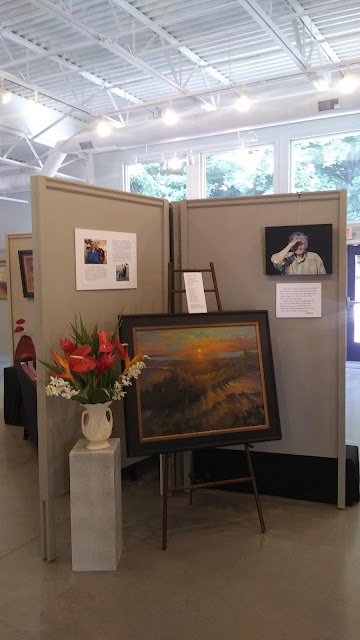 Chapters of our lives. Irreplaceable. In my dreams last night, I had dinner with another dear departed friend, a dream with no logical plot but one that jumped from one scene to another. “It sounds meaningless,” the Artist commented, laughing, as I tried to reconstruct the non-sequitur sequences. “Not at all,” I objected. “It was wonderful spending time with her!” It was a gift, seeing her again.

News of the latest loss came to us on Sunday, at least, while we were at home, which was a small relief. So often in the bustle and rush of retail, mental and emotional gears require shifting on a moment’s notice, as one conversation is interrupted by another with entirely different content and timbre – greetings, stories, news, departures. I was in my bookshop on two separate occasions when I learned of the deaths of friends who meant the world to me. One of those times, after hanging up the phone I was wracked with sobs; the other time I sat paralyzed in shock and disbelief.

It is feeling too deep for irony, though we had seen other friends only hours before and caught up on their lives. “We hardly ever get up to Northport,” one said, and I replied, “And we hardly ever get out of Northport.” We are all hard at work. It is summer. And yet, life and death keep happening…. 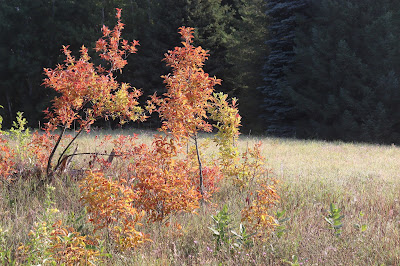 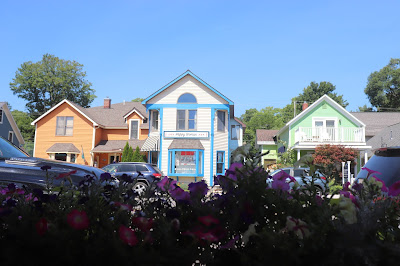 I was asked to write a book review for a local church newsletter and chose to devote my 350 words to two novels. Since then I have been unable to resist amplifying that short essay, so I'm including it all in this post. I’ve also been reading two nonfiction books that I’ll mention more briefly. 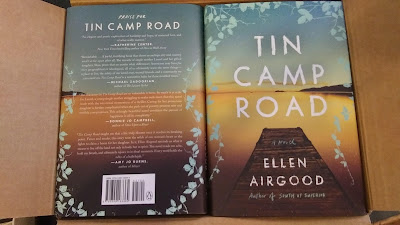 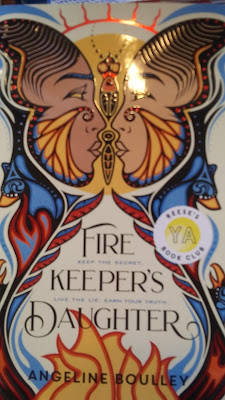 The two new novels this summer come to us from Michigan’s Upper Peninsula: The Fire Keeper’s Daughter, by Angeline Boulley, and Tin Camp Road, by Ellen Airgood. Both are written from the heart and also offer glimpses of life perhaps unfamiliar, at least at firsthand, to many (though not all) northern Michigan readers and residents.

The protagonist of Tin Camp Road, Airgood’s fourth book of fiction (South of Superior for adult readers; Prairie Evers and The Education of Ivy Blake for the younger set), is single mother Laurel Hill, who struggles to support herself and 10-year-old daughter, Sky, with whatever honest jobs she can find, mostly hard work at low pay. Laurel has plenty of sisu (the Finnish term for grit), and she needs every bit of it as life throws her one unexpected curve ball after another.

Laurel worked until the last stump fell into wedges and every wedge was stacked under Crank’s lean-to under an ever-steadier drizzle. The three twenties he handed her for this effort crackled in her pocket as she headed home, her boots splashing. She banged on the WELCOME TO GALLION sign at the outskirts of town, a hello punch to an old friend.

A serious issue facing much of northern Michigan (including Leelanau County) is widespread conversion of formerly year-round affordable housing to expensive short-term vacation rental, an economic trend that hits Laurel, literally, right where she lives. Finding a solution isn’t easy, and Laurel’s temporary fix leads indirectly to an even more painful situation, which I won’t reveal because I don’t believe in spoilers.

But Laurel and Sky are Hills, and Hills don’t give up. Gallion is their home.

Also set on Lake Superior shores is the first novel from Angeline Boulley, Fire Keeper’s Daughter, already a national bestselling YA sensation. This book’s main character and narrator, 18-year-old Daunis Fontaine, bears her mother’s family name, and because her father’s name does not appear on her birth certificate Daunis is not an enrolled member of the Sault Tribe of Chippewa Indians and cannot vote in their elections, so although Daunis has lived her whole life in Sault Ste. Marie, she often has trouble feeling she fully belongs anywhere. The social gulf the gulf is wide between the Fontaine and the Firekeeper families. She identifies strongly with Ojibwe language and culture, however, thanks to her late Gramma Pearl and beloved Auntie Teddie.

My cousins always tell stories about my aunt’s fighting days. Tales of Fierce Teddie and her legendary shenanigans that grow more hilarious with each retelling. Like the time when she was at a bar with friends and a Zhaaganaash [white] guy kept asking each girl if she was an Indian and how much Indian was she? He leered at Auntie and asked if she’d show him which body parts were Indian. She throat-punched him. While he was gulping for air, my aunt told him he just experienced a real Indian fist and she had another if he wanted to see that one too.

On the verge of beginning freshman classes at the University of Michigan (her goal is to become a physician) when her uncle dies unexpectedly and her Fontaine grandmother suffers a debilitating stroke, Daunis enrolls in Lake Superior State University instead, to be near her grieving mother and her grandmother’s nursing home. Then a third unexpected tragedy strikes, and she is drawn, despite conflicted feelings, into a mission of goodwill for her Anishinaabe people that soon has her embroiled in falsehoods and deceit.

With magnificent Lake Superior as their backdrop, these two works of fiction include serious economic and social problems facing today’s Yoopers, housing and drugs, as integral parts of their characters’ daily challenges. Ellen Airgood and her husband operate a diner in the tourist town of Grand Marais on Lake Superior, and Ellen (who waits tables as well as baking pies and muffins) presents U.P. working life in her novels as it is in real life, difficulties along with rewards. Angeline Boulley lovingly describes the beauty and glory of Ojibwe traditions but doesn’t shy away from some of the harsher, behind-the-scenes aspects of modern tribal life. Life in the Upper Peninsula is not for the faint of heart. Life in the 21st century is not for the faint of heart, is it? But both Boulley and Airgood give us strong, resourceful women characters who face up to life’s challenges, never forgetting the loveliness of northern Michigan that is their birthright.

The next book in my home reading, following another Primo Levi and a wonderful novel by Detroit writer Michael Zadoorian, was a travel memoir by a Scotsman who decided, in the wake of his beloved wife’s death, to follow the route of Robert Louis Stevenson through the French mountain region known as the Cevennes. And he would do it the RLS way: with a donkey. The first section of the book, however, a recounting of his wife’s illness, dying, death, and his own comfortless bereavement, was a tough slog. He said that he confided his grief and depression only to his journal and tried to hide it from the world, but he spares his reader nothing. And that section goes on to page 81. It isn’t that I think he should have “gotten over it” sooner: there is no timetable for brief, heaven knows. I only wonder why all of that agony from his journal was included in the book. At length, however, he sets out with his donkey, and then I was transported. His route – the same that RLS took a century earlier – lay not all that far from a part of France that captured my heart when the Artist and I wandered through it by car 21 years ago.

And now I am reading a book written and published in English but from a Korean publisher, which came to me because the author’s family has a vacation home in Northport, where she spends summers. Soon-Young Yoon’s Citizen of the World: Soon-Young and the UN is a series of short memoir essays of her work with the United Nations, and anyone who thinks (with smug self-righteousness) that “citizen of the world” describes someone without a home country and without political allegiance or commitments needs to read this book! I will be meeting with the author again on Tuesday and hope to be able to acquire copies for stock at Dog Ears Books. Stay tuned. 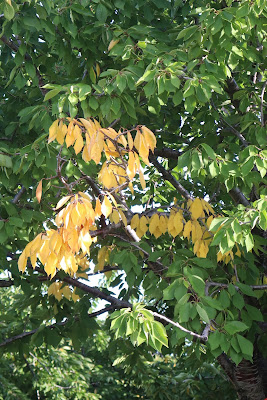 Life is such a mixed bag, isn’t it? The catholicity of my reading mirrors the myriad emotions and moods of my days. This post opened with sadness, but I will leave you with the smiles of Northport’s annual Dog Parade, cancelled last year but back this year to delight locals and visitors alike and give us all a few moments of joy that lingered with us long afterward like the aromatic smoke from a campfire. The coneheads deservedly placed #1 for costumes, but every person and every dog in the parade contributed to the overall joyous occasion, and you can see many more pictures over on my photo blog, "A Shot in the Light." 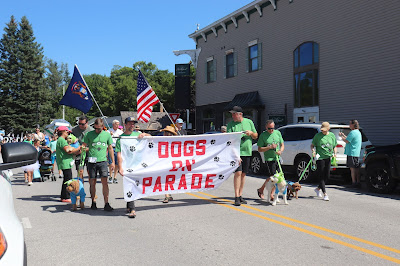 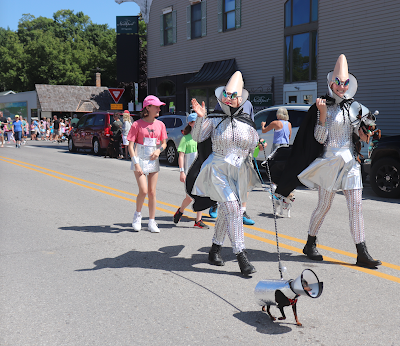 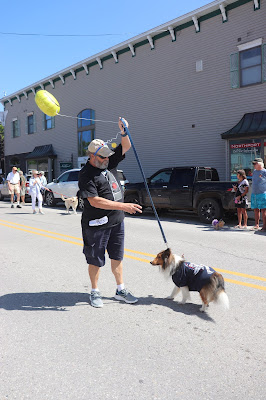 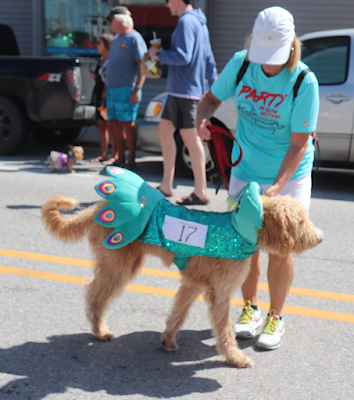 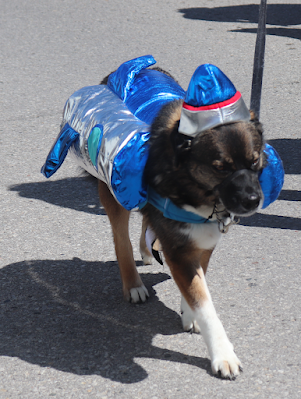 Peasy, of course, did not participate in the parade. Good heavens, all those people! He would have freaked out! But he was a happy dog on Sunday, to have us home and working out in the yard, and we were happy to have him with us. Don’t tell anyone, but I think little Pea is worming his way into the Artist’s heart. Who could resist such a cute little devil? 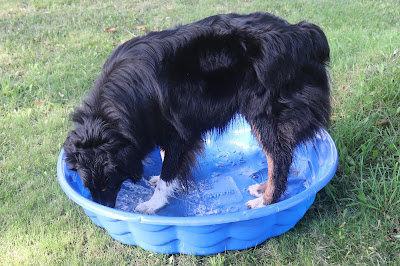 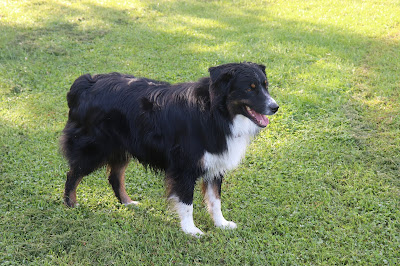 Oh, Pamela! I really understand how you feel when losing friends. I was moved by hearing that you had just seen these people, had heard of their plans or their funny stories. It is so very hard. I just lost my 80-year-old cousin, living in Seattle, and had followed his health problems by talking to his brother here in Conn. Then he was gone. And a great friend going through a difficult long-term illness, suddenly passed away. I just had to cry, think, walk and talk to a few people who knew them well. It is, and still is, hard. About your Dog Parade, your pictures lifted my spirits, such life and perkiness that seem to be part of what a dog is. And your Peasy - so pretty a doggie, I’m glad to hear that he is ‘’making waves’’ into The Artist’s heart. Good news!

Jeanie, it all makes your visit so much more precious -- and it was already priceless! Thank you again, you and Antonio, for spending time with us!