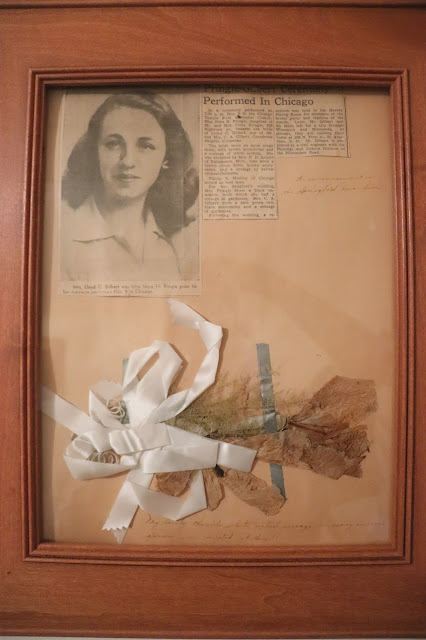 Anne’s House of Dreams is the fourth in L. M. Montgomery’s beloved Anne books. The first, of course, was Anne of Green Gables, the story of the young red-haired orphan girl coming to live on Prince Edward Island with unmarried brother and sister Matthew and Marilla. In that first book Matthew goes to pick up the boy they are taking in, to help with farm chores, and comes home with a girl instead, much to Marilla’s initial dismay. Anne wakes up the next morning desolate at the thought of being returned to the orphanage, unwanted, but shy Matthew surprisingly champions her acceptance, and Anne is launched into a new life.

My opening image today is of my mother’s wedding announcement in the newspaper, with her orchid corsage pressed beneath the glass of the frame 76 years ago. My copy of Anne’s House of Dreams, copyright 1917, no better than what dealers in used books call a “reading copy,” meaning it’s battered and falling apart but there are no missing pages, bears an inscription written in 1936 on the front-facing endpaper to my mother before she was my mother, before she was even a bride:

To Nora – May she be as nice a big girl as she is a little one.

“Little girl” Nora would have been 14 in 1936, just the right age – back then, anyway, in what can’t help but seem like simpler times – to begin dreaming of having a wedding and a house of dreams for herself one day.

I wonder if the “Anne of Red Hair” craze is still going strong in Japan. At one time, it seems, not all that long ago, every young Japanese girl had read the Anne books and dreamed of honeymooning on Prince Edward Island, and the very lucky ones actually did so, little P.E.I. coming behind only New York City and Paris, France, as the top dream destination for Japanese brides. All thanks to a series of simple stories for girls written a century ago!

(Well, now I see a serious research paper has been written on the subject. Something else for us to read.)

How many girls from poor Japanese fishing villages on coastal islands were ever able to make such an elaborate honeymoon voyage? After Anne marries Gilbert Blythe, which happens early in the House of Dreams book, the newlyweds spend their first month of marriage right there in their first house, rather than travel anywhere at all.

“I’m so glad we decided to spend our honeymoon here. Our memories of it will always belong here, in our home of dreams, instead of being scattered about in strange places.”

I can’t help but think, though, how those girls on faraway Japan's coast would have felt the atmosphere of Anne’s first married home as something familiar. Much more than it ever had in Matthew and Marilla’s home in Avonlea, the sea so near to the house in Four Winds Harbour

…surrounded her and called to her constantly. From every window of her new home she saw some varying aspect of it. Its haunting murmur was ever in her ears. Vessels sailed up the harbour every day to the wharf at the Glen, or sailed out again through the sunset, bound for ports that might be halfway around the globe. Fishing boats went white-winged down the channel in the mornings, and returned laden in the evenings. Sailors and fisher-folk travelled the red, winding harbour roads, light-hearted and content. There was always a certain sense of things about to happen….

There were memories that my mother carried to the first home I knew but kept tucked away, hidden from her daughters’ curious eyes for decades. Even the scrapbook started before her marriage and continued for a time afterward was a treasure my sisters and I saw for the first time after only our mother died and we were going through the house and all her things. But Anne’s House of Dreams, now – the reason my copy is so battered and worn is that all three of Nora’s daughters read and re-read it over the years. (I don’t doubt that one of those girls probably took it up into her hiding place in the backyard apple tree more than once.) Despite not-always-gentle handling, however, it survives.

And because I had been looking at my mother’s wedding picture in our tiny upstairs guest bedroom only the day before, last night when I began turning the soft, worn pages of the old volume, I thought of my mother as a young bride – the dreams she would have had and her first married home out in South Dakota. For me, this old book holds all of that. 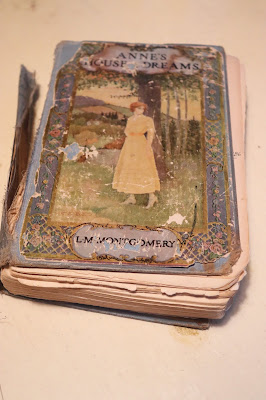 This is duch a special post. We found letters my mom wrote to my dad when he was in the service. It was startling to see them as young and in love.

Good for us to see, I think, don't you? And I think I love ANNE'S HOUSE OF DREAMS more than ever now, re-reading it in later life and looking back.

How moving and beautiful are your comments about your mother and about the Anne series. I’ve never read them, so I look forward to delving into all the corners of those stories. I wonder why your mother didn’t show her daughters her past, but it is so good that those mementos have been found and have been much-appreciated.

Jeanie, it will always be a mystery to me why my mother didn't share more memories with us while she was alive. My sisters and I always loved looking through old photograph albums and boxes of snapshots. Wouldn't she have seen that we would have loved to see her scrapbook? But she had her emotional reasons, I know, for not talking too much about her early life. And she was basically a very private person. Sigh!