My World, So Tiny and Limitless

The other day we drove over to Benson to visit the Friends of the Library bookstore, one of our favorite destinations, and I came home with half a dozen or more used books new to me – a bit excessive, perhaps, as we will be returning to Michigan within the month, and it seemed all the more hoggish as the Artist, on that trip, uncharacteristically contented himself with three magazines. But one of the books I bought was as much for him as for me (The Psychology of Everyday Things, and he said, yes, he’d heard about it, and it did sound fascinating, and he would like to read it), and another was for a friend, and a third something I know I’ll re-donate as soon as I read it, so all in all I did not feel sinfully greedy or guilty.

Benson is only 52 miles from Dos Cabezas (unfortunately, there is no way to get there by back roads, and we have to take I-10 from Willcox), and it is still in Cochise County. Our parking lot picnic after shopping for books was an apple and cheese stick apiece and a shared bottle of cold water from the car cooler, following which we drove back to Willcox and shared a brownie along with our usual drinks at the coffee house. Not a huge adventure, no new places, no exploring off the trail, and many of our days are like that, passed within a small, familiar world we know very well. But don’t let mileage fool you --. 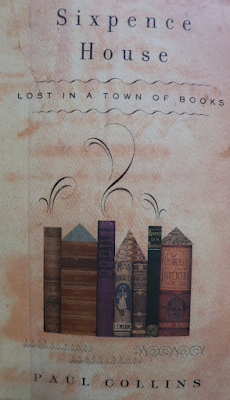 Before even paying for my day’s selections, I had read the first page of one of the books I’d found, and I couldn’t wait to dig in further. “Couldn’t” wait – but had to. Peasy needed his regular afternoon run when we got home, and a start had to be made on our supper -- both my responsibilities. Once the dog had had his exercise and a beautiful pasta salad was cooling in the fridge, however, I sat myself down with a cold beer and Sixpence House: Lost in a Town of Books, the story of an American couple who move to the celebrated town of Hay-on-Wye in Wales, where the husband, the book’s author, soon finds himself working (“anarchistically,” he says!) for none other than bookseller Richard Booth (d. 2019), the eccentric man who remade the little Welsh town into a literary heaven on earth.

The town we found that first day was filled with stores stuffed to the rafters with old books, massive ancient shelf breakers like a Pilgrim's Progress the weight and color of a manhole cover, a heavy bit of allegory indeed; and a slim and beautiful copy of Eve's Diary -- a curiously innocent work, lush with languid Beardsley-like drawings on every page, almost unrecognizable as being by Mark Twain, of all people -- we spent hundreds of pounds just shipping them all back home.

- Paul Collins, Sixpence House: Lost in a Town of Books

“This alone was worth the drive to Benson!” I tell the Artist happily, as I emerge from the Welsh countryside and back into my seasonal southern Arizona life.

Hay is a town of 1500 inhabitants, and at the time Paul Collins and his wife moved there with their toddler son from San Francisco, Hay boasted 40 bookshops! The boast now has shrunk to “over 20,” still more than a decent number (apparently several former bookshops are now antique shops), and there is a huge annual book festival, too. Reading of Hay, I recalled the summer I tried to persuade young Paul Stebleton (he is my son’s age, so, young to me), bookseller-owner of Traverse City’s Landmark Books (formerly Book-o-rama), to move his shop to Northport so the two of us could be pioneers in founding a northern Michigan version of Hay-on-Wye. He demurred – and is now in beautiful digs in the old state hospital in Traverse City – but it was a pleasant fantasy for me while I entertained it.

Back to the present – that is, the very recent past: After our pasta salad supper, I read a little further in my book and then set it aside to read aloud an article on Van Gogh from the new issue of New York Review of Books, trading my solo Welsh armchair travels for an armchair trip to France with the Artist. We paused once to return to Cochise County, Arizona, to make popcorn, and we then had Peasy’s full attention as we humans continued exploring Van Gogh’s world, rewarding little Pea’s good manners with the occasional popped kernel. For now, the three of us are still together, and it was a happy evening for me.

Much earlier in the day, shortly after sunrise, Peasy and I had fortuitously encountered friends out on the range, where Therese and I caught up on news and laid plans for the following day while our dogs enjoyed each other company, Peasy and Molly in their usual rambunctious way (Molly loves to chase Pea, and he loves being chased by her), old Buddy more sedately. That was a lovely interlude, too. 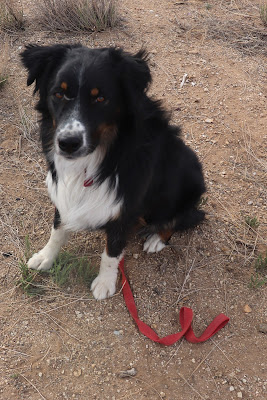 At day’s end the Artist and I watched, on the recommendation of both my sisters, the first few episodes of “The Kominsky Method,” which we loved. (Alan Arkin! It doesn’t matter to me how old he gets: to me, he is always sexy and appealing.) The show is set in Los Angeles but felt, to me, not so much like travel to an exotic place (my mother was born in L.A., but I’ve never been to California)  as being in the familiar country we now inhabit daily, that of the declining years of life. Not in a terrible way, either, for the most part. After all, the “small world” feeling of doing ordinary things together is very sweet, as we had experienced in Benson, in Willcox, in Dos Cabezas. We don’t have to be in Wales or France to be happy. (Good thing, too, eh? We still work at least half the year. We are not checking out yet!) And before we went to sleep we visited Peru! Yes, as I read aloud from Che Guevara’s Motorcycle Diaries, the Artist and I were two young Argentine doctors, hitch-hiking around South America!

This happiness thing – it comes and goes. Reading aloud to David, watching him share popcorn with my dog, I was perfectly content in my little world. Such a tiny world! Just the two of us in the car that afternoon without the dog, too, and then sitting in the coffee house together. My time outdoors with Therese and our dogs. A geographically and socially restricted world it is of partner, neighbors, dogs, birds, and cows, but it feels quite expansive, since there are also letters from faraway friends and books and movies to transport me over miles and across oceans.

The truth is, I wake almost every morning (and usually during the night, as well) to free-floating feelings of angst and dread, and it takes coffee and writing to put my world back into perspective and fill me with gratitude for the life I have had and the life I still have, and this return to perspective I have to accomplish over and over. (Like housework, like showering, it's never done!) But it works, so I will do it again tomorrow. 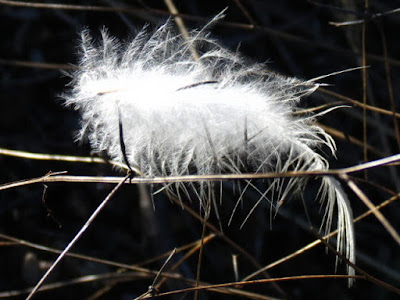