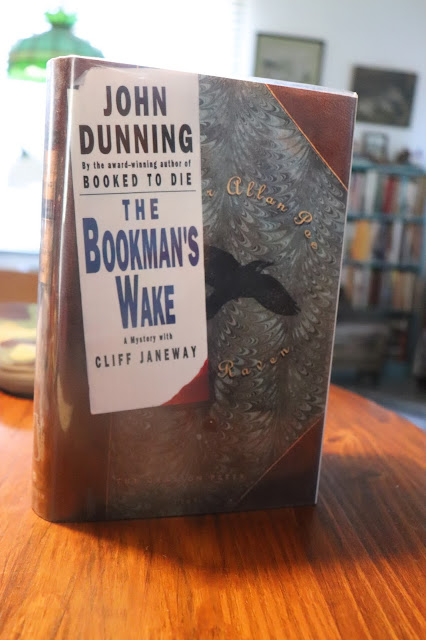 What is it about the book business, anyway, Moon wonders. Sometimes it seems like nobody on any level of it makes any money. Maybe if you’re Random House and you can figure out how to publish nobody but James A. Michener, you can make a little money. Everybody else picks up peanuts.

Why do they do it? he wonders. But he knows why.

Only fitting, I reflected, to find myself reading a mystery starring a rare book dealer in a copy I scored from a ten-cent table of used books. Not a signed copy, not even a first printing, but quite a clean, decent later printing of the hardcover edition, a volume I’m sure Cliff Janeway, fictional former cop-turned-bookman, would have picked up himself for resale. Janeway is also a reader, and the quotes and references to works of literature in the stories' dialogue are part of the fun of this series.

I was about halfway through reading The Bookman's Wake when, as I turned a page, a slip of paper fell out. No, it was not a $100 bill. Not even a dollar bill. Twenty-eight years a bookseller come this summer, I have yet to find money in any book that has come my way, which seems ironic, considering how often I used to hide five-dollar bills in my own books back in a previous (pre-graduate school) life. I would move my hidden cash around so often -- in my concern that the book holding the money was far too attractive and obvious, certainly the first item a book-loving burglar (in my vivid imagination) would pull off the shelf to inspect! -- that I would lose track of it, which made a subsequent accidental finding seem like manna from heaven, an unexpected gift. A harmless eccentricity left behind but occasionally fondly recalled when I find random bits of paper other people have left behind in used books I buy. -- Are you curious? Do you wonder? Grocery lists and airline boarding passes are a couple of the most common such items. 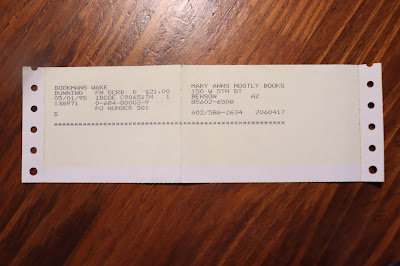 The slip of paper from the Dunning book made me smile as I read the lines on it made by an old dot matrix printer, words that indicated a purchase made by Mary Ann, of the former Mary Ann’s Mostly Books in Benson, Arizona, the book ordered directly from the publisher when new, its cover price $21. Two Benson bookstores we loved to visit in former years are both gone now. We found retired bookseller Lenore volunteering at the Friends of the Library bookstore, however, and learned from her that Mary Ann had moved her base of operations to Apache Junction, at the urging of (and, I hope, with a lot of help from) her children. In any case, I remember both shops fondly and enjoy my reading all the more, knowing the book came by way of Mary Ann.

The word ‘bookman’ (from the Dunning’s title) is interesting. Merriam-Webster defines it broadly as “a person who has a love of books and especially of reading” or “a person who is involved in the writing, publishing, and selling of books.” Dictionary.com says a bookman is “a studious or learned man; a scholar” or “a person whose occupation is selling or publishing books.” (Parenthetical note: note ‘person,’ no gender specified three times, ‘man’ once.) In the world of John Dunning and Cliff Janeway, an actual, real-life world inhabited by many world-wide, ‘bookman’ is understood more narrowly. It implies a person (man or woman) working in the secondhand book trade, especially one specializing in rare books, a dealer (occasionally a bookstore employee) with an emphasis on and knowledge of contents as well as physical attributes, as well as a deep love of same.

Anyone can be a bookseller. To be called a bookman, especially by a bookman, is a compliment, an acknowledgement. When a bookman friend – another woman – told me I was a “real bookman,” I glowed!

‘Bookwoman’ is heard now and then but somehow seems to imply more what the dictionaries give as the definition rather than what we in the trade understand by ‘bookman.’ A big reader. Why is that? Is it the way 'poet' sounds serious and 'poetess' brings to mind a wannabe? No wonder women in theatre and film want to be called, simply, actors! I usually call myself simply a bookseller and leave questions of expertise and gender to others. Today, though, I’m thinking about those questions.

In The Postmistress, a novel that was one focus of my most recent post, the woman in charge of the little post office is actually called the postmaster. The character notes at one point in the novel, and the author reiterates in her afterword, that U.S. postal regulations give the position title always and only as postmaster. This fact points silently to a time in American history when having a woman in the position was unthinkable and perhaps not even recognized as legal. One female postmaster in Dos Cabezas, Arizona, did the work of the job while her husband held the official title, I have read. That’s just how it was. I wonder if the husband, the nominal postmaster, ever made an appearance behind the counter.

If either my artist husband or my bookstore volunteer is in the shop at the same time I am there, and someone comes in for the first time with a question for the owner, the question is invariably directed to the man. It doesn’t matter who is sitting at the desk. It doesn’t matter what we are wearing. One dear friend of mine who suffered this indignity for years finally began to do a slow burn when her husband, jokingly, would say to the questioner, “Perhaps my assistant can help you,” the assistant being the actually bookseller – and, in her case, definitely a bookman!

But I’ve had to learn to let that stuff slide. It will never end, and there’s no point in spending the precious days of my life resenting ignorant, thoughtless assumptions over and over.

Whether or not ours is objectively a “man’s world” (and who in the world could take an objective position on the question?), I try to live as much as possible in my own world. I was quite entertained one time when a male friend was telling me about how he could “lose himself” in nature, on a river or in the woods, and added for my benefit that he didn’t think women ever had such experiences! "And you know that by comparing your experiences as a man with the experiences you’ve had as a woman?” I prodded gently, whereupon he had the good grace to laugh.

Here are a few aspects of my world. The actual owners of a pair of two-year-old horses, half-brother and -sister, have no idea that I think of those horses on the edge of Willcox, Arizona, as mine. People driving back and forth on I-10 certainly do not recognize the tree I call my tree as mine. Back in northern Michigan, there are many little rural corners and stretches for which I feel what I must admit is a proprietary kind of love. But this is not a sense of ownership as the law would understand it. These are things that have become parts of my soul. I lose myself in them.

And so yes, when I am lost in a book quest or examination of an exciting book find, just as when I am out exploring the morning world with my dog, I am not doing it as a woman but simply as myself. This is one of the glories of being lost in one’s work or in the natural world: other people’s presumptions, assumptions, expectations, and judgments fall out of consciousness. Self-consciousness evaporates.

Why, though, do I not call myself a ‘bookman’? Out of modesty? In part. But also out of honesty. Whatever the field of my various life endeavors – music, philosophy, books – I have never been drawn to specialization. It is the old question of depth vs. breadth, and time and time again I have chosen the latter, content to be one of life’s generalists.

As for whose world ours is, each of us is the center of our experience, and our experiences and emotions come to us subjectively, not comparatively. So I make no apology for living and working and feeling and writing out of my own little world. I say, anyone who claims to be doing otherwise is self-deluded or seeking to delude.

Outdoors with dog or indoors with books? I could not choose one over the other. Fortunately, the two come together in me. Moreover – and miraculously -- my world and the Artist’s world exist side by side and overlap! Lucky, lucky, lucky both of us! 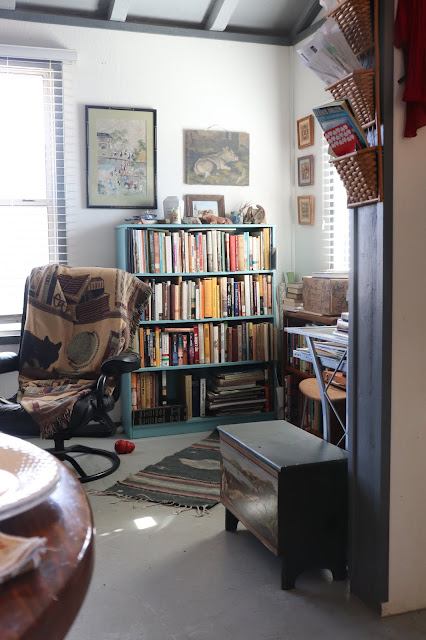 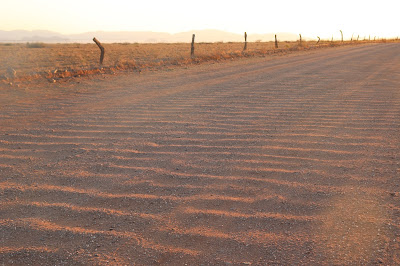 Lucky lucky all of us who can lose ourselves in something besides ourselves. I love the light on the rippling sand.

Dawn, that rippling sand is actually the road through Apache Pass from Hwy. 186 to Bowie! We didn't venture very far on that particular evening but have driven the entire length a couple of times.