Me and Henry Miller and the Michigan Woods 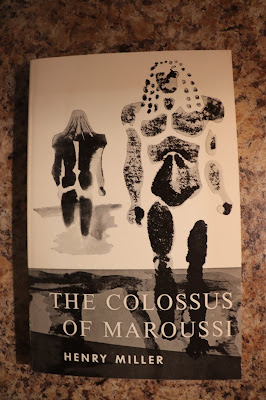 One must come to Eleusis stripped of the barnacles which have accumulated from centuries of lying in stagnant waters. At Eleusis one realizes, if never before, that there is no salvation in becoming adapted to a world which is crazy. At Eleusis one becomes adapted to the cosmos. Outwardly Eleusis may seem broken, disintegrated with the crumbled past; actually Eleusis is still intact and it is we who are broken, dispersed, crumbling to dust. Eleusis lives, lives eternally in the midst of a dying world.

After finally finishing Life in a Mexican Village, by Oscar Lewis, a book I’d begun reading two years ago and set aside for something else and then picked up again -- many times in that long interval -- and then hungrily devouring (though not wanting either to end), one after another, two books I highly recommend, Willa Cather’s My Antonia, written and published over a hundred years ago, and Katey Schultz's just-published and stunning first novel, Still Come Home, I found myself in a somewhat dizzy, head-spinning state of mind (powerful literature can do that to a reader), and I turned for a couple of days to juvenile literature of another era rather in the way one partakes mid-feast of a palate-cleansing sorbet.

I do so love the Moffats! Sometimes I don’t visit them for a few years and then have the joy or discovering them all over again. Dear Janey, the middle Moffat! I am the oldest in my family, not the middle, but I can certainly to Janey’s small but troubling social worries and certainly to her sports cluelessness. I laughed myself silly over the chapter where she “took up” basketball!

Not long ago a customer in my bookshop was looking for books for a granddaughter, "ten years old but a very good reader, and she likes more old-fashioned stories. Nothing with vampires or the end of the world.” The women shared with me some of the books her granddaughter liked, and I was able to suggest a couple of current children’s books that should fill the bill. After spending some time with Prairie Evers, by Ellen Airgood, and Secret Sisters of the Salty Sea, by Lynne Rae Perkins, the customer happily agreed that they should suit her young reader perfectly. I wonder if that girl has read the Moffat books or others by Eleanor Estes, but she may be aging out of them by now. Well, not that one can ever age out of the Moffats! Once charmed, permanently smitten! And actually, I re-read the books Airgood and Perkins write for young people, too. I find them lots of fun and very good medicine.

The other kid book, Piney Woods, was not a re-read but a first-time read. Like The Middle Moffat, however, it is a story set in a more innocent age, back when a boy could learn to shoot and repair guns and dream of a career as a gunsmith, with absolutely no criminal or terrorist or even political implications implied in the tale. Sigh!

Returning next to grownup books, I didn't focus on a single one and so have been juggling three in the past couple of days and nights: Jim Harrison’s Off to the Side, which I’m enjoying for the second or third time; the Henry Miller quoted above; and Shantyboat by Kent and Margaret Lighty. Note that this last is not the Harlan Hubbard shantyboat story, beginning on the Ohio River across from Cincinnati, but an earlier trip made by a different couple, starting up above St. Paul back in the 1930s. These people, Kent and Margaret Lighty, were more tourists or leisure travelers than the Hubbards, who truly lived off the land and water and bartered along their way and made a whole life of their shantyboat years, but it is pleasant reading, nonetheless. Nothing wrong with simply pleasant reading sometimes, and given the time period of their travels it does offer a window into the history of that era. Shantyboat by Harlan Hubbard, now — that is inspirational reading. But I revisit the Hubbards more frequently so am giving the other couple a turn now at present.

Now, about Henry Miller. Henry Miller is not a member of my personal literary pantheon (though he is a great favorite of the Artist), but in the beginning this particular book had me practically me gasping with admiration for page after page. His descriptions of people he meets in Greece are nothing short of delicious, his long, detailed sentences one mouth-watering course after another! -- Alas! Just as I was ready to elevate this book to favorite status, I reached pages in which the author veered away from description and fell into oracular pronouncement. Page after page, one ringing, tedious declarative statement after another. He was pontificating! Ugh! Luckily, little trick-or-treaters in Northport provided welcome distraction, and I knew that at home there would be apples to peel and slice for the dryer, and that Jim Harrison’s memories and the Lighty couple’s river adventures awaited me again, too.

The eternity of any particular time or place, I want to say (thinking about the Miller quote again) — perhaps more a subjective phenomenon than a fact of the physical world — never exactly reveals itself but teases each of us from time to time in different places and at different times in our lives. Miller found it in Greece. For me it is in Michigan woods and Arizona mountains. 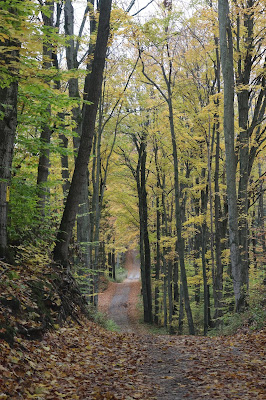 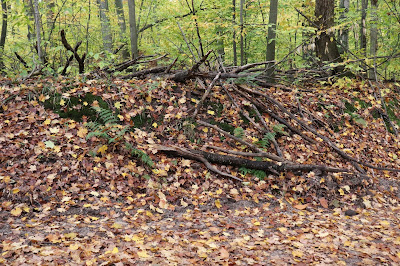 These old northern Michigan roads have not been here even 200 years, but they have the feeling of history and even eternity about them. Now can you see in the two images below where French immigrant farmers once lived? The lilac bush near the road's edge and that old apple tree are your first clues, and farther back are the two cedars that marked the corners of their old log cabin, long ago rotted back into the earth. 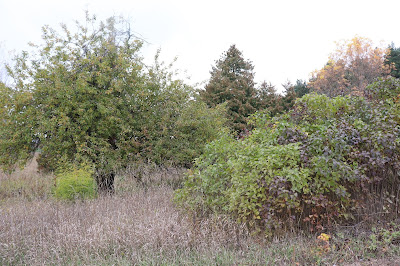 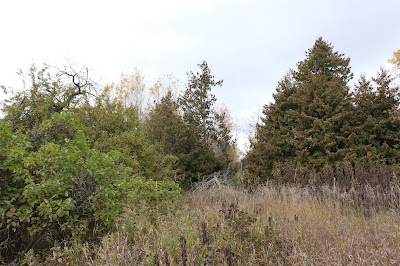 Somewhere in my digital files -- and if only they were logically and consistently organized, I could show you -- are photographs of rocks in the woods used by earlier inhabitants to grind acorns and perhaps corn from their gardens. In the Dragoon Mountains of southeast Arizona are similar grinding stones. 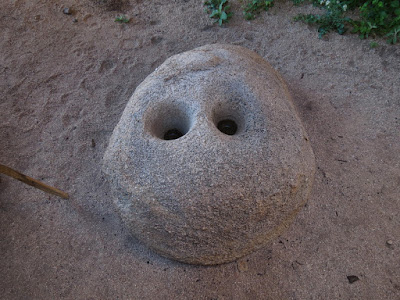 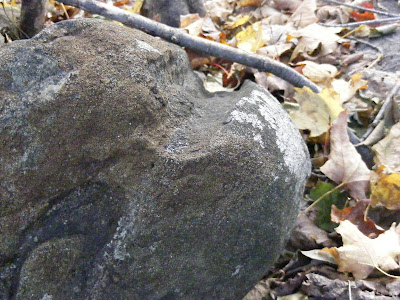 The past is all around us, in every land, still breathing, living on in the stillness or in the noise, whether or not we are paying attention. It's just more obvious in some places than others. As for the broken world part, it's up to us to make what small mending attempts are within our power. 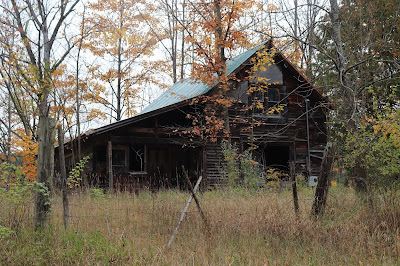 Reminds me of the old family home sites we saw in Norway. One was just a big boulder that used to be part of a foundation, another was a pile of timbers and fallen chimney bricks where Bruce's grandmother had lived as a todler.

Dawn, that's it exactly. When David and I visit East Tawas, we go down the road where his grandfather had a farm long ago. The first time we were there we tramped around in the weeds, and David found a single cinder block. No one driving by would know that an entire family grew up and that weekly horse-trading was carried on where now there is nothing but weeds and small trees.