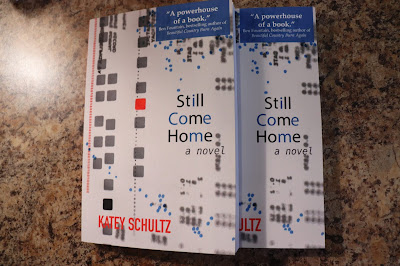 The novel opens with a young woman in Afghanistan daydreaming of an apricot:

…She wants the fruit. She wants her freedom. She wants to do everything she shouldn’t. She shoves back her purple headscarf and walks to the open window of her small, second-story apartment. She sticks her torso out and leans, hanging her head upside down. Her hair dangles like a black flag in the breeze. Positioned like this, she won’t have to look up the street at the remains of her family compound. She won’t have to wish she’d died in there three years ago either.

This morning I finished reading Katey Schultz’s new novel, Still Come Home, a story focusing on four main characters: Aaseya, the young Afghani woman in her early 20s; Rahim, her 40-year-old husband; Miller, an American second lieutenant stationed in Afghanistan; and Miller's wife, Tenley, back home in South Carolina. I don’t want to tell you very much about them, because you deserve to meet them as I did, as Schultz introduces them. Let me say only that their worlds and cultures and experiences are light-years apart from each other but that as a reader I was completely pulled into every scene, fully believing in their reality.

This is a powerful novel. From beginning to end, there is no slackening in the tautness of either the action or dialogue.

…A headache balls at the base of his skull. He watches the city face into shadows, block by block. Airborne particles of sand catch the sun’s rays, Mother’s Nature’s tracer fire. Within minutes, the horizon appears lit by a throbbing Armageddon. Four tours and it has come to this. The night before Miller’s last mission outside the wife, Chaffen’s voice echoing like a challenge inside Miller’s head: That’s how you’ve got to start thinking, in all directions.

Miller’s mind is fixated on responsibilities to his men and his family back home but tortured also by an earlier mission that went badly. Rahim, hungering for a future with sons of his own, has not escaped his own nightmare boyhood, and his present is confused and cruelly limited. So both men try to focus on tasks at hand and not think or plan or dream too far ahead. Their wives, too, can only meet each day’s immediate challenges and hope, dimly, that the future will be better.

A poor, scrawny, mute, orphaned or outcast child plays a pivotal role in the story.

…Flecks of dirt line his closed eyelids, and she can see a few fleas in his shaggy, dark hair. His lips are chapped, his earlobes bitten and red. Scuff marks fall in a line down his torso, likely from belly-crawling over rocks or wriggling through shrubs. At the bottom of his shorts, each leg pokes through the opening of fabric like a tent pole.

Such a frail and unlikely survival — so far! — in this country torn by endless war! We fear for Miller and Rahim and Aaseya but especially for Ghazél as the story’s tension amps up page by page. Does this child have a chance?

Describing the most barren landscape, Schultz’s lyrical sentences convey the love its inhabitants have for their home:

Rahim darts across the road, taking his weapon off safety, then leans his side against the embankments from shoulder to ankle, blending into the land as seamlessly as a scattering of dirt. The desert is amazing like that, the way it stretches and folds across the country like the broad, sloping belly of a giant. The way it holds almost everything a man could ever need, including his shape, until they’re practically one.

But maybe you think you don’t want to read a novel about war in the Middle East.

Perhaps Afghanistan is the last place you think you want to envision with your mind’s eye.

It’s too alien, too faraway, too nightmarish.

What I’m telling you is that those “reasons” count for nothing. It is not only the American soldier and his wife back home with whom you will feel kinship but also with Aaseya (from the book’s very first page), Rahim, and Ghazél, and this story will bring home to you the truth of universal humanity like nothing else I’ve read for a long time.

Katey Schultz visited Dog Ears Books in 2013 to read from her book of short and short-short stories, Flashes of War. Among her many awards, Schultz was awarded a Gold Medal from the Military Writers Society of America for that earlier work. I’ve been anticipating more from her ever since, and Still Come Home has exceeded my high expectations. Her connection to Michigan, in case you’re wondering, is through Interlochen Center for the Arts.

I'm always hesitant to read about war anywhere. I guess I just want to stay unaware of the truth. It's kind of like not wanting to read a book where the dog dies, only somehow worse. I feel like a wimp.

Dawn, there no actual combat scenes in this novel, and I know you would appreciate the writing and the humanity. I was tempted to quote sentence after sentence, they are so beautiful and real. How a young woman who has never been in the military -- and has she ever been to Afghanistan? I don't know -- can make these scenes so real is a miracle. I really want people to read this novel!